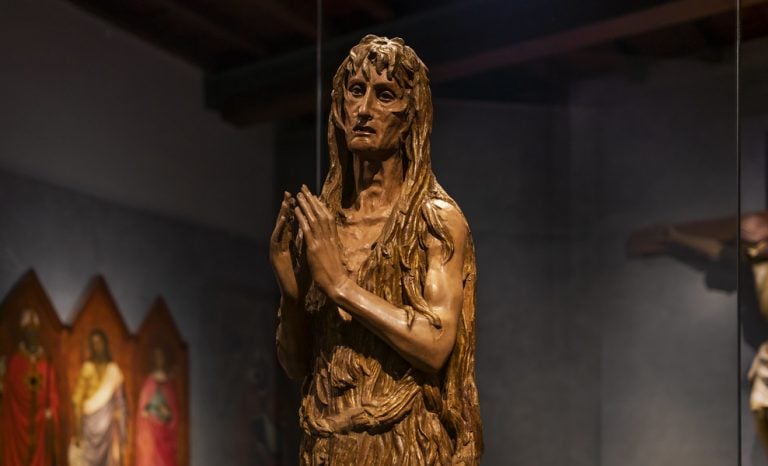 Why Is She So Hairy? Iconography of Mary Magdalene

Donato di Niccolò di Betto Bardi, better known as Donatello, was a sculptor born around 1386 in Florence, which is also the city in which he died in 1466. His work evidences the shift towards naturalism and perspective which took place in the Early Renaissance. Among his most famous sculptures are a marble statue of Saint George, two statues of David (an earlier one in marble and the other in bronze) and the life-size bronze Equestrian Statue of Gattamelata.

One work in his oeuvre is especially striking, the Penitent Mary Magdalene (c. 1455). This wooden sculpture of imposing size (1.88 m) demonstrates an outstanding anatomical realism and deep psychological meaning. It can be found in the Museo dell’Opera del Duomo, where it was moved from the Florence Baptistery after the flood of 1966.

Who was Mary Magdalene?

Mary Magdalene was a leading figure among the followers of Jesus. According to the Gospels, she stayed with him at the moment of his crucifixion and was the first witness of his resurrection. Over time, however, her story has been confused with that of the unnamed sinner who poured oil on Jesus’ feet and of Saint Mary of Egypt. This latter was a former prostitute who renounced her sinful life and went to live as a hermit in the deserts of Egypt.

How is she usually depicted?

Due to such confusion, the iconography of Mary Magdalene is very diverse. A mournful Magdalene often appears alongside Mary, the mother of Jesus, at the foot of the cross in representations of the crucifixion (Masaccio, Crucifixion, 1426). She may also be seen ascending to heaven covered with her extremely long hair (like on the Giotto’s fresco below), carrying an alabaster jar of fragrant oil (Jan van Scorel, Mary Magdalene, c. 1530) or holding a skull. This last item symbolizes the consciousness of our own mortality and of the need for repentance (Guido Reni, Mary Magdalene Penitent, c.1640).

How does Donatello show her?

Except for the long hair, none of these attributes are present in Donatello’s Penitent Mary Magdalene. Donatello represents her as an emaciated figure with sunken eyes, protruding cheekbones and untidy hair. Vasari described her in his Vite as:

A wooden Saint Mary Magdalene in Penitence which is very beautiful and well executed, for she has wasted away by fasting and abstinence to such an extent that every part of her body reflects a perfect and complete understanding of human anatomy.

This sculpture is indeed characteristic of the Renaissance in the anatomical sense described by Vasari. Her extremely thin figure and distressed facial expression evidence a thorough understanding of the human body. Donatello has represented the physical effects of fasting and wandering under the sun of the desert in an admirably realistic manner. In this regard, he was probably inspired by the story of the ascetic life of Saint Mary of Egypt.

But there is much more to say about this sculpture as an artwork of the Renaissance. Donatello’s Penitent Mary Magdalene offers a powerful insight into psychological reality. We see a human, expressive and dynamic Mary Magdalene. She is not a saint surrounded by angels and ascending to heaven after death. She is alive and suffers as any of us would in her circumstances.

This Christian paragon of repentance bears the emotional scars of her past and present. There is no need for additional objects to express her probable feelings of remorse and weariness. The expression on her face is revealing enough. And there is dynamism in her. Through a slight contrapposto, we see that she moves forward. Her eyes look onward as if she were waiting for something to happen. Her hands are placed in a gesture of prayer but still do not touch. As a believer, she has hope in salvation. Despite her physical weakness and precarious life, she finds the strength to continue her penitence. Glory awaits her at the end of her life, but Donatello has represented the process as opposed to the end.

This interpretation of Mary Magdalene as a persevering character, and not only as a symbol of remorse, is very suggestive. For more information on this, see Martha Levine Dunkelman’s article Donatello’s Mary Magdalen: A Model of Courage and Survival.