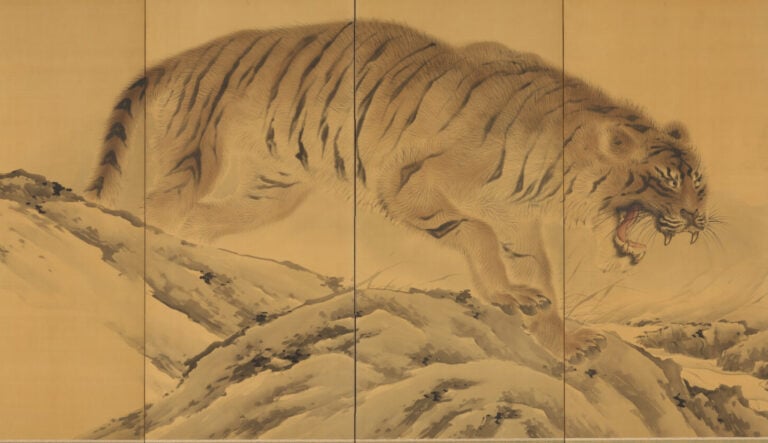 The year of the tiger is upon us! Tigers are frequently depicted in Chinese art, but they have fascinated so many artists from across the world. As the Chinese new year approaches, let’s take a look at this fierce and beautiful animal in art.

The Chinese use the lunar calendar for festive occasions. The Chinese New Year always falls somewhere between late January and early February. This year it is February 1st. Each new year is given one of 12 animal signs, derived from Chinese folklore – a Chinese zodiac.  The animals follow one another in a certain order: rat, ox, tiger, rabbit, dragon, snake, horse, sheep, monkey, rooster, dog and pig.

With their stunning black-and-orange striped coats and long, white whiskers, tigers are the largest and most iconic of the big cats. Did you know that tiger stripes are as individual and unique as our own fingerprints? Wild tigers live across Asia, although sadly their numbers have dropped dramatically because of human life expanding into their territories, hunting and poaching. They are solitary animals, except where mothers are raising their cubs, and artists across the globe find them endlessly fascinating.

As tigers have prowled China for thousands of years, it is no surprise that they have been frequently depicted in Chinese art from the ancient times to today. We know the ancient Chinese found tigers both terrifying and captivating. Among the earliest depictions of tigers are white jade carvings dating back at least 4,000 years. Used as both symbol and subject, their depictions range from playful kitten to monstrous man-eater.

For Warriors and for Children

Tigers are seen as both cruel and terrifying but also brave and powerful. China’s ancient warrior class (and its more modern military) use the image of the fierce tiger as a sign of military prowess. In ancient times, people usually compared emperors or kings with the tigers. Tigers are also considered as a patron deity for Chinese children and parents will buy clothes, shoes and hats with tiger designs for their babies and children. The tiger in this case is guardian and protector from bad spirits.

Asian artists often paired tigers with dragons amidst swirling clouds. Together, the two images represent opposite principles in nature, working in harmony. Countries without native wild tigers tend to more playful, sometimes distinctly odd depictions. In Japanese art, the animal can look quite gentle. Whereas in India, where rural communities rightly feared this giant predator, the image is much more terrifying.

Japanese artist Kishi Chikudo, born in Hikone in 1826 belonged to the Kishi school of painting.  The Kishi school was distinguished by its superior paintings of animals, especially the tiger. They developed a very distinctive style of brushwork for the expression of bodies and fur. Tigers are not native to Japan, and Kishi Chikudo is believed to be the first Japanese painter who sketched real tigers, seen in traveling zoos or circuses. He was shocked when he saw the animal up close and personal, and became obsessed with them as subjects. He produced a number of masterpieces, especially later in life, but the sheer intensity of his work led to serious mental health problems: some say he saw hallucinations of tigers from his own paintings.

French artist Delacroix also had something of an obsession with tigers—he painted them many times in his early career. His models ranged from his own pet cats to the captured animals in the Jardin des Plantes zoo in Paris. His largest painting of tigers is below. They are cute and playful , but of course, this play is training for a life of stalking and hunting. Some years later in 1854, he painted The Tiger Hunt, a ferocious image of a hunt gone wrong, where the tiger is fighting back against cruel humanity.

Some Europeans encountered tigers in the wild during their colonial rampages, but most saw them in zoos, which spread across Europe from around the beginning of the 17th century. King James I of England had a tiger in his royal menagerie at the Tower of London. Artists and writers were entranced by the tigers strength and savagery. The etching by George Stubbs above shows a rather sad looking animal with a distinctly odd looking body.

English poet, painter, and printmaker William Blake is famous for his work The Tyger. It was published in 1794 as part of his Songs of Experience collection. In The Tyger, Blake combines a childlike portrait of this fascinating creature with verses that contemplate its nature. For Blake, it is both the beauty and intense ferocity of the tiger that makes it an absolute miracle of nature.

Tyger Tyger, burning bright,
In the forests of the night;
What immortal hand or eye,
Could frame thy fearful symmetry?

There is an infamous tale from Singapore of a frightening encounter between man and tiger. This took place in in 1835 when a government superintendent and labourers were attacked by a tiger while conducting a land survey. The tiger crashed into the survey equipment rather than the workers, and amazingly, no one was hurt. The event was considered so important that it was captured in a painting on display at the National Gallery Singapore. Much earlier Flemish Baroque master Peter Paul Rubens depicted a vivid hunt scene involving a tiger (shown above). It was one of four hunt scenes commissioned by Maximilian I, Prince Elector of Bavaria to decorate the grand Schleissheim Palace. It is brutal to look at, but shows the power and the fear of both animal and human.

The Tiger Who Came To Tea

If we head back to childhood, who remembers reading The Tiger Who Came To Tea? First published in 1968, written and illustrated by Judith Kerr, it is still regularly in print, and is a favourite of storytellers everywhere. It is thought that her early experiences in the Nazi Holocaust may have influenced the author in this tale of a tiger who inexplicably turns up and eats everything in the family home. The tiger is charming, but implacable, robbing the child of her security and routine.

For older fans of tigers, there is of course Richard Parker, the big cat who survives a shipwreck with a young Indian boy in the novel (and movie) Life of Pi. Some say the tiger represents the boys primal survival instinct, and their relationship is certainly complex and multi-layered.

However you like your tigers—wild, protective, untamed or kitty-cat-like—there is something in the art world for you. And as for 2022, the Chinese prophets predict big changes and adventure. We may find our enthusiasm and drive again, after a subdued year of global pandemic and difficult social restrictions.

Enjoy the Year of the Tiger! Roar!

Hunting scenes have been an important theme in art history but we at DailyArt Magazine prefer to celebrate life instead. Here you will find only...