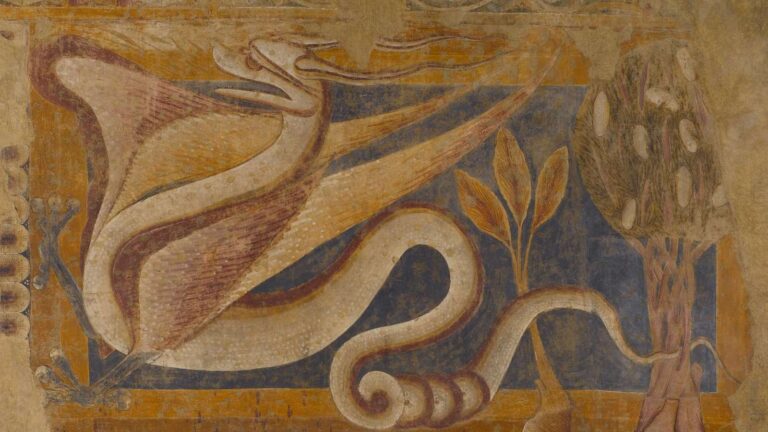 Dragons are everywhere in popular culture. People make movies about them, collect stuffed animals of them, and dress up as them for Halloween. They have been staples of every major fantasy series in the past century. Whether they’re cute or terrifying, everybody loves dragons!

This isn’t just a modern phenomenon. Throughout history, cultures all over the world have told dragon stories and depicted dragons in art. While the best-known and most beautiful dragon art comes from Asia, medieval Europe made some cool dragons, too. Here are a few fabulous medieval dragons (and dragon-slayers) and the stories behind them.

The Dragon as the Devil

In medieval thought, the dragon was connected to the devil, sin, and evil in general. This is perhaps unsurprising since remnants of this association appear in ancient and modern images of demons, gargoyles, and all other manner of reptilian nasties. The dragon-devil connection and reasoning behind it can be found in bestiaries, medieval books with illustrations, descriptions, and moral associations for a variety of animals.

To this dragon the devil is likened, who is a most enormous serpent. As it often rushes forth from its cavern into the air and the air glows around it, so does the devil, raising himself from the depths (of hell) transform himself into an angel of light and delude stupid people with the false hope of glory and human joy.

Saint George and the Dragon

Since dragons represent the devil, several Christian saints are believed to have slain them. The most famous is Saint George, who is popular all over the Christian world. When Saint George defeated his dragon, he saved both a terrorized village and the princess about to be sacrificed to the beast. Instead of soaking up the glory and marrying the princess as you might expect, he instead convinced the villagers to convert to Christianity, gave his reward money to the poor, and left. Saint George was the perfect superhero for the Middle Ages, since he fit so well into the medieval ideal of chivalry. Accordingly, he features in many medieval and Renaissance images. I adore this elegant version painted by Italian artist Carlo Crivelli, even though the dragon is a rather small and scrawny by today’s standards.

Saint Margaret and the Dragon

Saint George saved a maiden from a dragon, but a maiden named Saint Margaret of Antioch saved herself. An early Syrian Christian, Saint Margaret pledged her virginity to Christ and was martyred for it. But her murderers had a difficult time, because miraculous things kept happening to save her, until she was finally beheaded. At one point, she was swallowed by the devil in the form of a dragon. Fortunately, Margaret brought a crucifix with her into the belly of the beast. The devil couldn’t stand having the crucifix inside him, so she was able to escape him. Medieval manuscripts are full of great images showing St. Margaret and her cross exiting the dragon.

The Dragon as a Regular Animal

Strange as it may sound, the medieval dragon wasn’t just a myth or symbol to the people of its time. On the contrary, medieval Europeans believed that the dragon was every bit as real as its supposed enemy, the elephant. And despite their pretty nefarious connotations, dragons were sometimes casually depicted in places like wall frescos in monasteries (above) and pitchers for hand washing called aquamaniles (top of the page). While he doesn’t seem to be standing in for Satan at the moment, the dragon on the aquamanile is still quite fearsome, as he’s shown eating somebody. It seems that even the most whimsical medieval dragons were a far cry from the children’s cartoon characters we sometimes see them as today.