The Shiny Shield With Caravaggio’s Medusa

Caravaggio is the synonym for Baroque. The artist known of close physical observation with a dramatic use of chiaroscuro can be called the father of tenebrism.

He made the technique a dominant stylistic element, darkening shadows and transfixing subjects in bright shafts of light. His works are also one of the most influential for the epoch – for example for Peter Paul Rubens, Jusepe de Ribera, Gian Lorenzo Bernini, and Rembrandt, and artists in the following generation heavily under his influence who were called the Caravaggisti or Caravagesques, as well as tenebrists or tenebrosi ("shadowists"). Today we are going to talk about this severed head – the head of Medusa, the gorgon who had hair of living snakes. Anyone who looked at her was turned to stone. She was decapitated by the hero Perseus who firstly used a shining shield from the goddess Athena to avoid looking at Medusa directly. Here we have a horrified image, of a decapitated head of Medusa, for which the model was apparently a male youth. Medusa is severed but still conscious. He or she just realised its mortality–in a most horror way. Blood pours from it in thick streaks. Medusa screams in silence. The serpents are only the silent witnesses.   [caption id="attachment_14870" align="alignnone" width="999"] 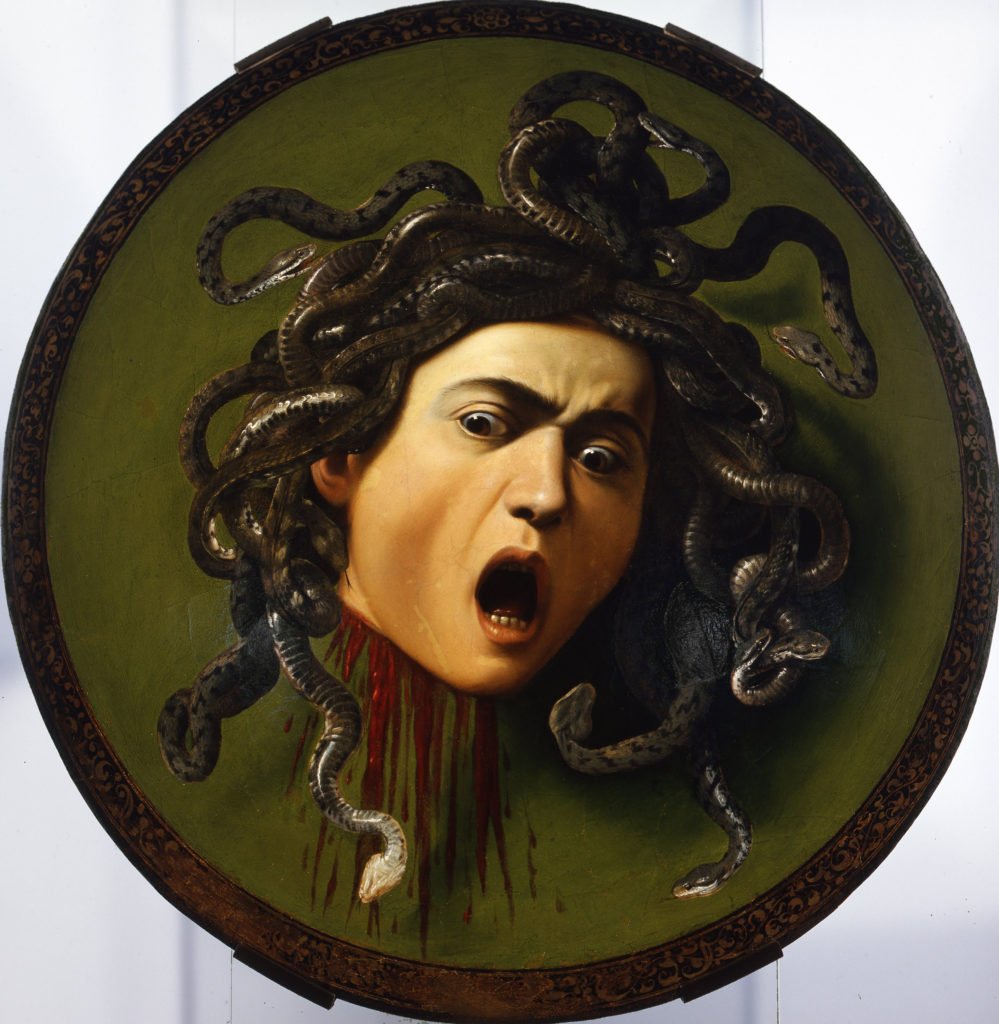 Caravaggio Merisi, Medusa, 1595 - 1598, Uffizi Gallery, Florence[/caption] Caravaggio was commissioned to make this masterpiece as a gift for the Grand Duke of Tuscany, Ferdinando I. It was supposed to enter the Medici collection in Florence (to the Armory of the Uffizi), as a competition to Leonardo da Vinci by this time dead for 80 years. Medusa was painted on a wooden shield, which alluded to a story about the young Leonardo, whose father once asked him to decorate a shield. Leonardo went into the fields, collected snakes, lizards and insects, and assembled them into a hybrid monster which he painted on the shield. The wooden shield is of course also referring to the shield from Athena which was cunningly used to exploit the the Medusa's power to petrify people. This iconography was often used by the Medici to represent their military power. Caravaggio's Medusa exists in two versions, the first was created in 1596 and the other presumably in 1597. The first version (1596) is also known as Murtula, after poet Gaspare Murtola (d. 1624), who wrote of it: "Flee, for if your eyes are petrified in amazement, she will turn you to stone." This work is privately owned. The second version, shown here, is slightly bigger (60×55 cm) and is not signed though often dated 1597. This work is held in the Uffizi Gallery in Florence.