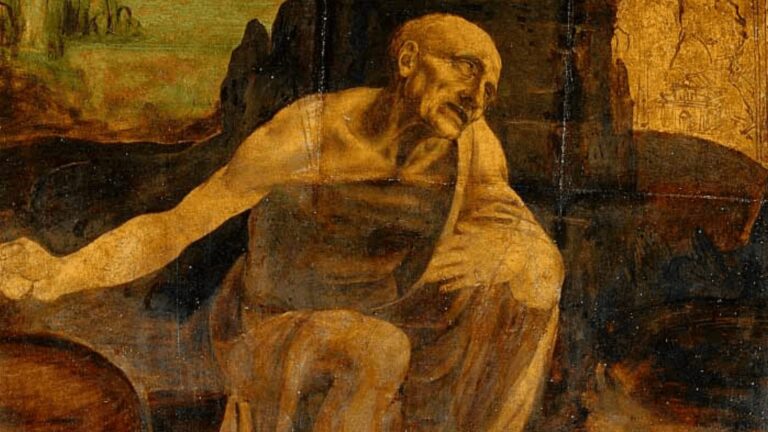 As one of the most influential artists of the High Renaissance, Leonardo di ser Piero da Vinci left a prolific legacy in the realm of the arts. However, the world’s premier artist, and the master of arguably the most famous painting of all time, gained the unfortunate reputation of being notoriously slow to complete his commissions — if he completed them at all! Leonardo left behind countless unfinished works of art, many of which remain unknown, untraceable, and forgotten. In fact, his legacy comprises less than 20 completed paintings. Here are three of his most famous unfinished works.

Leonardo da Vinci was born into a golden age of creativity and his genius was celebrated during his lifetime. His interests were varied and diverse. Leonardo was a polymath— the ultimate ‘Renaissance man’ who took a keen interest in the world around him. He acquired advanced skills in many fields such as mechanics, carpentry, metallurgy, engineering, and painting.

The Virgin and Child with Saint Anne

This unfinished work by Leonardo is a joyful depiction of the Virgin Mary with the infant Jesus and Mary’s mother, Saint Anne. This portrayal is full of warmth depicting the familial dynamic between grandmother, mother, and child. He used atmospheric perspective to hint at the mountains in this distance and employed the sfumato technique to soften the transition between colors, thereby creating a delicate haziness. The tenderness of emotion flows between the three figures of this triangular composition with Saint Anne as the axis. The lamb, a recurring Christian icon, is included as a symbol of Jesus, hinting at his ultimate destiny as the lamb of God. A dark line on the left side of Mary’s shawl remains incomplete.

The painting is believed to have been commissioned for King Louis XII in 1499, following the birth of his daughter Claude.  It was likely chosen to honor the wife of Louis XII, whose name was also Anne. It was never delivered as promised, as it was observed in Leonardo’s workshop as late as 1517.

It did eventually make it to France as it was located in the inventory of the Château de Fontainebleau in 1683. It has been speculated that King Francis I acquired the painting from Leonardo’s beloved assistant, Salai, following Leonardo’s demise. It is now displayed at the Louvre in Paris.

Saint Jerome moved to Rome in his youth and embarked on a remarkable life of scholarly pursuits. He authored several authoritative treatises that greatly influenced early Christian theology. In 382 CE, he was commissioned by Pope Damascus I to produce an “official” Latin translation of the New and the Old Testaments that came to be known as the Vulgate. Upon the demise of Damascus I, Jerome left Rome and spent four years of his life in the Syrian wilderness as an ascetic. This episode of his life became a popular theme in religious artworks.

Even in its unfinished state, the artist has conveyed an enigmatic rendition of the aging hermit kneeling in a rocky landscape. He is surrounded by mountains that are shrouded in mist. A lightly-sketched church is visible in the far distance and at his feet is the lion that became a loyal companion after Jerome famously extracted a thorn from his paw. Even though it remains unfinished, this painting evokes a highly emotional reaction as the anguish of the penitent saint is palpable.

This painting was started around 1482, although it is unknown whether it was a result of a commission. It is housed today at the Vatican museums in the Vatican City.

Adoration of the Magi

The three wise men of the East (also Kings or the Magi) were pilgrims who followed the guiding star to Bethlehem to witness the birth of the Christ child and bring him gifts of gold, frankincense, and myrrh. The three figures were venerated as the patron saints of travelers in the Middle Ages. The Adoration of the Magi (their homage to the infant Jesus) became a celebrated Christian motif.

Leonardo’s famous rendition on this subject was the result of a commission from Augustinian monks that was intended as a panel for the altar in the church of San Donato in Scopeto, located outside the Florentine city walls. He undertook to finish the commission within thirty months. He created a life-size draft, over seven feet tall, and rendered the under-paint tones. It depicts the Virgin and Christ child in the center of the panel, deviating from prior artists who placed them in a corner. He also improved upon the contemporary practices of perspective by making changes in clarity and color based on the distance of the objects in relation to the viewer’s eye.

However, in the year 1482, Leonardo moved to Milan pursuing an offer from Ludovico Sforza to serve as a resident artist at the Milanese court. When Leonardo reneged on his commission, the Augustinian friars decided to commission another altarpiece on this subject to Filippino Lippi. Both versions of the Adoration of the Magi are now located at the Uffizi Gallery in Florence.

In addition to these unfinished paintings, Leonardo left behind unfinished sculptures (such as the Gran Cavallo intended for Francesco Sforza), many unfinished inventions, and his extensive writings that were never published during his lifetime.

Despite the seemingly abysmal track record, it is perhaps unfair to deem this great Tuscan master as incompetent. It is also untrue that his varied pursuits merely distracted him from his paid commissions. In reality, Leonardo likely hesitated to declare his work complete. The more he learned and grew from his life experiences, and his knowledge of the human anatomy through dissections, the more he felt the urge to improve upon and perfect his works. Ultimately, he was primarily motivated by the pursuit of knowledge, rather than its publication. Leonardo da Vinci’s legacy, though unfinished, remains tremendously inspirational through the ages.