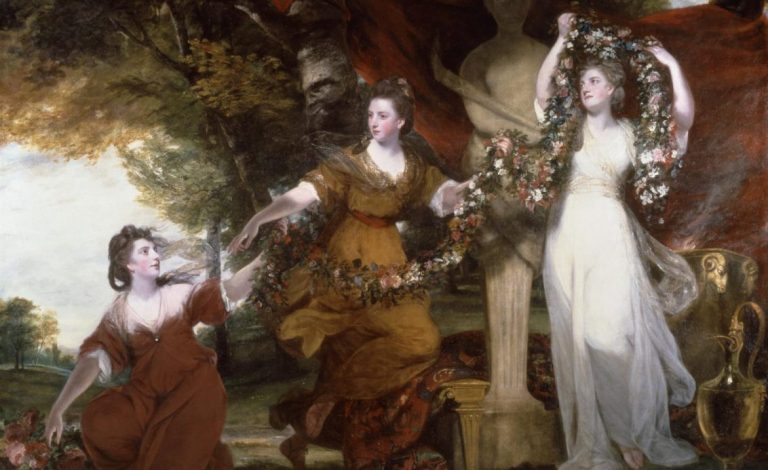 Three Ladies Adorning a Term of Hymen is a huge triple portrait of the Montgomery sisters by Sir Joshua Reynolds. It thematizes aristocratic marriage and uses classical elements to allegorize the portrait. Exactly this type of marriage is represented in the Bridgerton Netflix series.

The first president of London’s Royal Academy of Arts, Sir Joshua Reynolds, depicts the Montgomery sisters as the three graces and shows them celebrating marriage by worshipping the Greek god Hymen. It was a very expensive commission by Luke Gardiner of his soon-to-be wife, Elizabeth, and her two sisters. At the time its cost was £450, the equivalent of over £40,000 today!

This will be the best picture I ever painted.

I wish to have their portraits painted together at full length, representing some emblematical or historical subject; the idea of which, and the attitudes which will best suit their forms, cannot be so well imagined as by one who has so eminently distinguished himself by his genius and poetic invention.

In classical tradition, the graces, also known as the three charities are daughters of Zeus (Euphrosyne, Aglaea, and Thalia).

The graces delight guests at parties, just as portraits alluding to them would have done in the 18th century.

By using the poses of the three graces, Reynolds compliments his sitters as the reference implies classical beauty. Therefore it pleases the patron – who is likely the suitor or husband – and gratifies the viewers.

In Reynolds’ portrait of the Montgomery sisters as graces he gives them theatrically wind-blown hair and beautiful complexions. There is an elegant motion with the chain of flowers linking them together in a balletic and strikingly lit composition.

On the right, beside a smoking altar, is Anne (as Thalia represents beauty) in a white dress that befits a married woman. In the middle is Gardiner’s fiance, Elizabeth as Aglaea (representing elegance). Finally, Barbara as Euphrosyne (representing mirth) kneels on the left while handing up flowers to Elizabeth for the wreath. She is furthest away from marriage in real-life and symbolically in the painting. Sounds like what we learn from the Bridgerton series, right?

You have been already informed, I have no doubt, of the subject which we have chosen; the adorning of a Term of Hymen with festoons of flowers. This affords sufficient employment to the figures, and gives an opportunity of introducing a variety of graceful historical attitudes.

The sisters are in a garden decorating a statue of the Greek god Hymen with flowers. It is a ritual in celebration of marriage taking place in a fecund garden.

Pindar, the 5th-century lyric poet mentions Hymen as a son of Apollo and one of the muses. Hymen is known from Roman nuptial poems and rites, and is meant to bring happy marriages.

Of course, we also know the word hymen to mean the membrane of skin which closes the vagina. So it also denotes virginity, a boundary to wifedom (in the context of the 18th-century). The idea of a boundary is picked up by the word that the title of the painting uses for the statue, a term that can mean a marking stone for borders.

Graces in a Garden for Gardiner

Another allusion to female sexuality is the garden itself. Reynolds gives us lots of details here, such as the cultivated landscaped garden and stream in the background.

Reynolds thus chose to paint three young women in a garden setting in fullfilment of a commission from a gentleman named Gardiner suggesting he was not, himself, incapable of enjoying a pun.

Gardiner, as an Irish politician, was involved in law changes in Ireland and at the time the 1753 Hardwicke Marriage Act meant marriages now had to take place in churches with licenses. This means that the ritual in the painting is possibly a reference to the new barriers in place for marriage. Making the pun on terminus, boundaries, and hymens all the more significant.

Luke and Elizabeth married in July 1773 and the painting went on display in the following year’s Royal Academy exhibition. For contemporary viewers, it is thus a portrait of two wives and their younger sister, who is literally still on the market. The painting garners popularity and makes Barbara more likely to become someone’s wife.

The swathe of deep-red drapery in the background, the shadow-casting gnarly tree in the center, and the looming statue between Elizabeth and Anne give a slightly ominous tone to the painting. This is fitting for the somber reality of marriage in the 18th century, and it very much resembles the marriage arrangements which appear in the fictional Bridgerton’s story.

The imagery of woman was contained within the parameters of her prescribed social role as man’s other and his possession.

This painting is arguably a celebration of marriage as a female rite of passage. It’s also an allegorical portrait of women in classicizing costumes and actions. Both of these elements are gendered. It is rare to see a man painted allegorically. It’s even rarer to see a man depicted as celebrating the transition from bachelor to a husband. Sadly, Elizabeth died in childbirth at the age of 32.