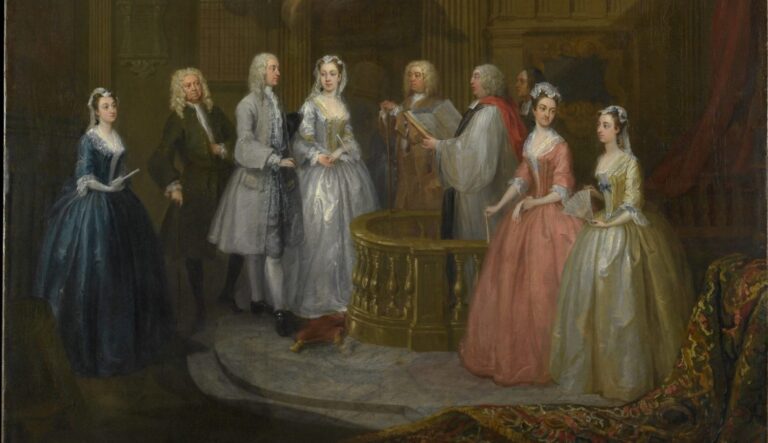 Weddings have provided many skilled artists an avenue to flaunt their talents by portraying the complexities and intricacies of this age-old tradition. Though wedding traditions differ from region to region and between social classes, the air of romance and celebration (usually) tends to remain the same. As we approach the post-COVID wedding season, here is some wedding inspiration in art.

The Celebration of the Bride

Edward Blair Leighton was an English painter known for his romanticized depictions of the medieval era. As the son of a painter, his family recognized and encouraged his talents early in his life. His works convey historical themes in a sentimental and nostalgic manner. They are rich in detail and often portray romantic or chivalrous pursuits. Although he never became a member of the Royal Academy, Leighton had exhibits there for over forty years.

This painting depicts the moment of solemnization of a marriage. While it doesn’t convey a particularly medieval quality, the painting is in keeping with Leighton’s general theme. As with any successful wedding, the focus here is on the bride. Leighton centers this painting around the bride, who signs her name in the large register before her. She has an ethereal quality that is further enhanced by the sunlight pouring in on her through the latticed windows. The iridescent dress and the delicate veil enveloping her further emphasize the heavenly glow. The bystanders of the painting include the officiant, the groom, and the family of the newly wedded couple, forming a balanced frame around her.

Although weddings are generally accompanied by celebration, that does not appear to be the case here. Even though this wedding is no doubt a grand celebration and the couple in the spotlight appears to be prosperous, the mood here is rather bleak. The setting appears to be a dark church with a young and desolate bride at its very center. The source of her inconsolable despair appears to be the old figure next to her, who is presumably the groom. The medals on his chest provide an unsubtle hint of his great wealth, though the look he casts upon his young bride is peculiar – certainly not one of love or admiration. The other figures surrounding them echo the dark, contemplative mood of this work.

This painting is by Vasily Pukirev, a Russian artist from the 19th century. Pukirey started from humble beginnings, but his path led him to the Moscow School of Painting, Sculpture, and Architecture in 1847, where he also went on to teach. This painting, titled The Unequal Marriage, became his best-known work. Pukirev also makes a cameo in his painting at the far right of the canvas. Could he have intended this work as a social commentary or was this a manifestation of a lost love from his own life?

This is one of the most famous works of the esteemed Dutch and Flemish Renaissance painter, Pieter Bruegel the Elder. Many of his genre paintings such as this one depicted various quaint scenes of rural life.

This painting takes place within a lively barn in the midst of a wedding celebration. The bride sits prominently in front of a green curtain at the center of a crowded banquet table. She appears silent and demure, separated from the celebrations unfolding around her. Guests are pouring through the door and there are two bagpipers providing live entertainment. The light peeking through the window hints at the early hour of the day. In accordance with 16th century Flemish customs, the groom is absent, as he would not participate in the celebrations until the evening. There is much going on in this painting and the murmurs of chatter are palpable. There is a peculiar and rather misplaced foot under the banquet table, can you spot it?

This painting is the creation of John Lewis Krimmel, a German immigrant in Philadelphia. He started his artistic career in 1810 and became well-known for his scenes of American life, particularly of the domestic persuasion. Here, Krimmel renders a wedding in the household of a farmer in Pennsylvania around 1810. The objects and the decor, such as the ceramics, artwork, and furniture, including the Windsor chairs, suggest the comfortable life of this relatively prosperous family.

Although Krimmel chose to depict the bride in white here, brides did not necessarily dress in white during this period. The artist likely chose the dress to ensure that viewer’s eyes gravitated to the bride in the room crowded with family, friends, and pets. The seated lady, presumably the bride’s mother, is overcome with emotion. The bride is leaning on her new husband in a loving embrace and the couple appears to be almost oblivious of the clergyman presiding before them. Lovebirds above the young couple’s head further symbolize the harmonious matrimonial union.

Martin van Meytens the Younger was a Swedish-Austrian painter with an impressive clientele including members of the Austrian aristocracy. As he came from a family of artists, he had exposure to artistic pursuits early in his life. He became a court painter in 1732, and eventually the director of the Viennese Academy of Fine Arts. This breathtaking painting depicts the elaborate nuptials of the heir to the Austrian throne, Joseph II to Princess Isabella of Parma, which took place on October 5, 1760, at the Hofburg Palace in Vienna. Meytens created five paintings to commemorate this momentous wedding.

At the very center of this incredible room is a grand table with 14 seated guests. The painting captures the moment when several elegant servers are presenting the dessert to these fourteen special guests. Unfortunately, it does not appear that the rest of the crowd (both in the room and in the balconies above) have not been provided with what we can only assume was delicious dessert!

Pascal-Adolphe-Jean Dagnan-Bouveret was a French-born artist who was raised in Brazil. He was active in the 19th century and became an important member of the Academic School of Artists. In this painting, Dagnan-Bouveret depicts the studio of a photographer who is in the midst of a wedding photoshoot. The invention of photography was a fairly new development of the time and fascinated Dagnan-Bouveret.

The setting here is based on an actual studio in Paris, however, it is actually in Vesoul as indicated by the notice on top of the open door in the foreground. There appears to be lively chatter in the room, with the young couple taking center stage. The body language of the couple betrays their newly wedded bliss. The exquisite detail and the richness of the sitters attracted great public acclaim when the picture was presented at the Salon de Paris in 1879. Dagnan-Bouveret likely chose this theme as he was engaged to be married when he painted this.

Hindu weddings involve a multitude of colorful rituals and ceremonies spanning days (and sometimes even longer). This painting is the product of the elite Ajmer school in Rajasthan in Northern India. It depicts one of the main marital ceremonies involving a sacrament before agni or the holy fire.

The couple is under a traditional pandal or mandap. This mandap is fashioned with pots that are stacked on top of each other and decorated with banners of mango leaves. A Hindu priest conducts the ancient rituals and the young couple sits before him in rapt attention and with clasped hands. In the foreground, the Hindu God Brahma witnesses the ceremony. He is identified by his four heads and his traditional attributes.

This painting records the wedding ceremony of Alexander Duff, 1st Earl of Fife to Princess Louise, the daughter of King Edward VII and Queen Alexandra. It is a depiction of the royal couple kneeling at the altar. The bride was a distant cousin of the groom and his junior. Her nerves are apparent in her stance. The Arch Bishop of Canterbury officiated this grand affair on July 27, 1889.

The chapel is packed with aristocrats and dignitaries, including a sea of bridesmaids dressed in delicate pink. The interior of the chapel is further enhanced by the flowers and tropical foliage.

This prominent British portrait painter, Sir Sydney Prior Hall painted this for Edward VII of Wales.