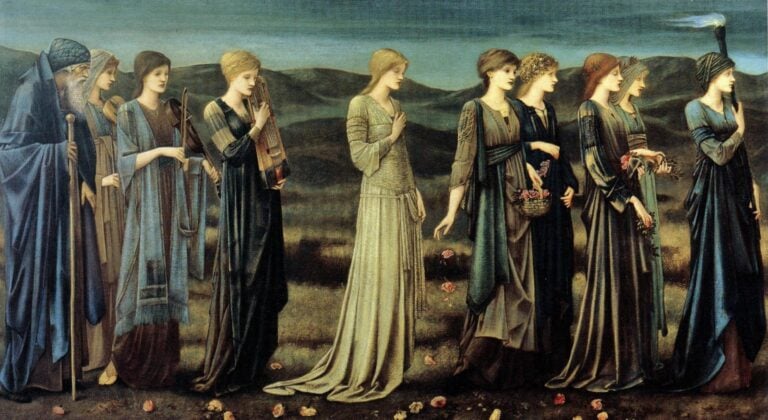 Is it only me, or do you also find yourself seeing all those happy photos of your friends/acquaintances getting married while scrolling your Facebook feed? Feels like I’m becoming a second Bridget Jones, “all by myself”…  Anyway, since I’m the fairy godmother I want to wish all the newlyweds all the best on the new stage of their lives and hence I’m posting here the most famous wedding paintings for good auspices and of course, as usual, some art-historical inspiration:

This painting can be interpreted in threefold ways: as an engagement portrait of Giovanni Arnolfini with his young fiancee (in this case, her swollen belly is considered as an expression of an ideal of beauty popular at the times of van Eyck, just think of Lucas Cranach); or as a scene of an act of marriage itself; or as a newlywed portrait in which the wife is already expecting the first child. Van Eyck inserted several symbolic objects in this work, starting with a puppy, which is a symbol of fidelity, to the slippers which symbolized comfort of home, to oranges on a windowsill symbolizing fecundity in marriage as well as wealth, to finally the convex mirror at the wall which may symbolize the Eye of God who witnesses the marriage of the two.

Giotto was a real master of depicting emotion (considered the first one to do so in Western painting): just look at Mary’s face, she is so unsure and nervous, anxiously playing with her wedding dress. Giotto’s genius makes one almost feel her panic and fear of marrying an older man.
(On a lighter note: can anyone help me name the plant sticking out of the balcony? I’m guessing it’s a palm, which the Jews used for blessing, but I’m still not sure, any leads appreciated!).
UPDATE: Dagmar Atynski from Vienna suggests that the leaf is rather of an acanthus plant which is a symbol of long life. Any other opinions?

And here it comes, the special moment! Everyone looks so serious but I guess it’s because they are trying very hard not to cry… And then, Rousseau shows us that the presently-fashionable weddings en plain air are not our invention at all. Notice the dog, a chromatic counterpart to the blinding white of the wedding dress and again, the symbol of fidelity.

By far my favorite part of any wedding! (maybe that’s why I’m not married yet, lol). Even at a peasant wedding, there is food in abundance, some good drink, a band trying to sound professional while in reality dreaming of eating too, and kids = always a little bit forgotten – sitting in a corner. In this genre scene, the newlyweds are not important at all: it’s the guests and the lively atmosphere of comforting chaos that Bruegel the Elder perfectly portrayed.

My second favorite part of the wedding, when everyone is happily full and a little tipsy, the party moves to the dancefloor, or on a meadow as in this case. Whirling, and jumping, and kissing randomly (can you spot the couple?), and stepping on other people’s feet, so much fuuuuuuuuuun!

While all the guests are having fun till the early hours of the morning, the newlyweds finally have a moment just to themselves. Although in the Golden Legend, which contributed to the diffusion of the story of St George in England, the princess remains anonymous, Sabra is a name supplied by Elizabethan writer Richard Johnson around 1596. In his Seven Champions of Christendom, Sabra, who is an Egyptian princess, marries her savior and has children.

The day after the wedding, when the bride and groom are already gone for their honeymoon, everyone else reconvenes to eat leftovers from the night before. The atmosphere is bittersweet, some are a little hungover, some complain about how much their feet hurt from too much dancing or shoes that are too uncomfortable/high, some reminisce about their own wedding, and the parents who feel joy and emptiness at the same time.