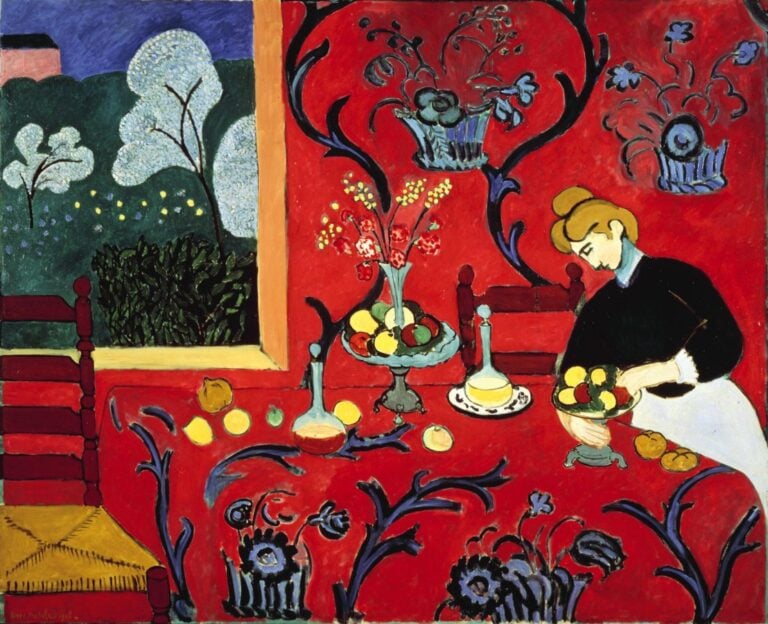 Did You Know That Henri Matisse Went to Morocco?

Sergei Shchukin once said “If a picture gives you a psychological shock, buy it. It’s a good one.” And the Matisse painting I would like to show you today shocked me. Unfortunately, the reproduction of Matisse’s The Dessert or Harmony in Red cannot show the depth of the color and the power of this intimate painting but nevertheless let’s discuss the story behind this artwork.

Sergei Shchukin was the most important Russian collector of early 20th century Western art. He collected works by the Impressionists, Post-Impressionists, Fauvists, Cubists, all art that can now be labeled “modern.” His collection, along with that of fellow modern art collector, Ivan Morozov, forms the core of the collections at the Pushkin State Museum of Fine Arts in Moscow and the State Hermitage Museum in St. Petersburg, Russia.

Henri Matisse is one of the most important figures of 20th century European art. Along with Pablo Picasso and Marcel Duchamp, he helped to define the revolutionary developments in painting throughout the opening decades of the 20th century. Although he was initially labeled a Fauvist, his works from 1908 do not belong to the movement. The paintings of the Fauvists were characterized by seemingly wild brushwork and strident colors, while their subject matter had a high degree of simplification and abstraction. Around 1908 Matisse started to go his own way. He turned to a more decorative way of thinking about color.

Harmony in Red was called by Matisse a “decorative panel” and it was intended for the dining room in the Moscow mansion of Sergei Shchukin. The painting was originally commissioned as Harmony in Blue, but Matisse was dissatisfied with the result, and so he painted it over with his preferred red.

Where I got the color red—to be sure, I just don’t know, I find that all these things . . . only become what they are to me when I see them together with the color red.

The color selection generates a feeling of warmth and comfort while contrasting richly and intensely. In affirming the flatness of the color, the artist managed to create within it the impression of space. All the elements of the painting make the impression of a single whole.

The motif of a room decorated with vases, fruits, and flowers appeared often in Matisse’s works.