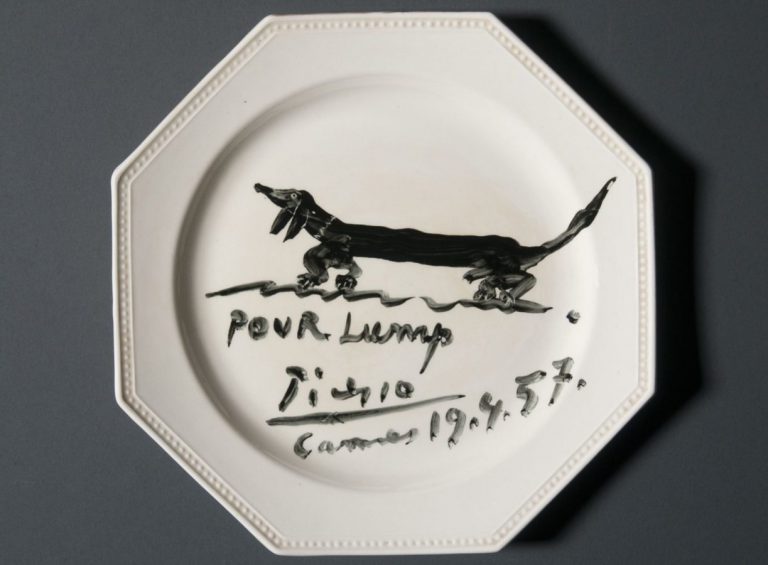 Did you know that some of the world’s most celebrated artists and performers have been dachshund owners? This extensive list of elite creatives includes Audrey Hepburn, Elizabeth Taylor, Kelsey Grammar, Leonard Nimoy, Marylin Monroe, Marlin Brando, Pierre Bonnard… The list goes on and on!

We cannot say with certainty what it was that attracted these creative minds to this glorious German breed. Perhaps it is their famous long and low silhouette, or their fierce loyalty, or maybe it is the look of complete defiance in their ever-alert eyes. Dachshunds have been consistently featured in the American Kennel Club’s top 10 most popular breeds. As an owner of two adorable dachshunds, I can confirm that nothing brings me more joy than being wrapped around the little stubby paws of these tiny stubborn creatures.

Though Andy Warhol had grown up with cats, sometime in 1973, he was convinced by his boyfriend to get a dog. Very soon after, Archie came into Warhol’s life and completely took it over! The dachshund accompanied Warhol to his studio, art openings, and restaurants. Warhol took Archie to interviews and press conferences and even passed on questions to Archie that he didn’t want to answer. The dog, very much like his master, sat there quiet and observant (and did not answer).

Warhol once refused to travel to London because it would require either leaving Archie behind or subjecting him to six months of quarantine in England. The pair were truly inseparable! Warhol eventually added a second miniature dachshund called Amos to his pack.

Lump belonged to Pablo Picasso’s friend and photographer, David Douglas Duncan, and met Picasso in April 1957 during a visit to his home. Duncan described the meeting as a love affair! Though Picasso had other dogs, he was completely taken in by Lump and would hold him in his arms and feed him by hand. He doted on Lump who spent the rest of his life with Picasso and featured in many of his paintings.

Duncan wrote a book in 2006 called Lump: The Dog Who Ate a Picasso that features photographs of Picasso and Lump and gives an insight into Picasso’s later years.

Lump lived a long and pampered life at Picasso’s hillside mansion in Cannes and died just ten days before Picasso.

Alhough it was a major departure from his usual subject matter, this extensive study of the two dachshunds enjoyed immense popularity and considerable success.

Hockney set up easels at varying heights all over his house. He would paint the dogs in different settings inspired by their activities (and inactivities). The paintings most frequently featured the dogs as they napped (a dachshund’s most favored hobby when they are not hunting critters). A mere glance at these paintings confirms the intimate quality of the portraits and serves as a testament to how cherished these dogs were.

Finally, as any proud dachshund owner would, I must also present to you my own dachshund muses. Here are my 13-year-old puppies, Chloe and Putin…