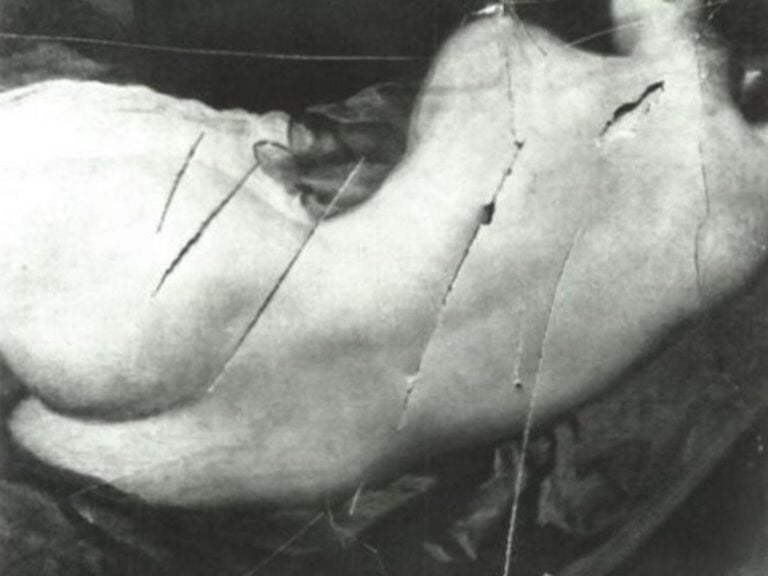 A Visitor Damages Piece Of Art – No Worries, It Will Be Fixed

The origin of the term “vandalisme” can be traced back to the French Revolution. Coined by Henri Grégoire, bishop of Blois to describe massive destruction of artworks, artifacts and monuments witnessed by him during that time. Here you will learn about 11 masterpieces that were attacked either by activists, mentally ill people or… by artists themselves.

Mona Lisa by Leonardo da Vinci has long been attracting vandals and is currently one of the best-protected artworks in the world. In 1956, the lower part of the masterpiece was severely damaged when a vandal doused the painting with acid while it was on display at a museum in Montauban, France. On 30 December of the same year, a young Bolivian named Ugo Ungaza Villegas threw a rock at the painting; this resulted in the loss of a speck of pigment near the left elbow, which was later painted over.

In April 1974, a disabled woman, upset by the museum’s policy for the disabled, sprayed red paint at the painting while it was on display at the Tokyo National Museum. On 2 August 2009, a Russian woman, distraught over being denied French citizenship, threw a terracotta mug or teacup, purchased at the museum, at the painting in the Louvre; the vessel shattered against the glass enclosure. In both cases, the painting was undamaged. The use of bulletproof glass has shielded the Mona Lisa from more recent attacks.

Most recently, on 29 May, 2022, Mona Lisa was again attacked in the Louvre by a man disguised as an elderly woman on a wheelchair. The man, identified later as a climate protester, attempted to break the bulletproof glass protecting the Renaissance lady, and then smeared a cake over it.

Rembrandt’s Night Watch was vandalized on several occasions. On 13 January 1911, an unemployed navy cook tried to cut it with a knife, but could not cut through the thick varnish on the painting. In 1975, William de Rijk, an unemployed school teacher, cut dozens of zigzagged lines in the painting with a knife before he was wrestled away by the guards.

The day before, Rijk had been turned away from the museum because he arrived after closing time. After the event, he was diagnosed with a mental disorder; he was sent to a psychiatric hospital and committed suicide there on 21 April 1976. It took six months to restore the painting, and traces of the cuts still remain. In 1990, a man threw acid on the painting. The guards managed to quickly dilute it with water so that it penetrated only the varnish layer, and the painting was restored again.

On 10 March 1914, militant suffragette Mary Richardson walked into the National Gallery of London and attacked Diego Velázquez’s painting Rokeby Venus with a meat cleaver. Her action was ostensibly provoked by the arrest of fellow suffragette Emmeline Pankhurst the previous day, although there had been earlier warnings of a planned attack on the collection. Richardson left seven slashes on the painting, all of which have been successfully repaired. Richardson was sentenced to six months imprisonment, the maximum allowed for the destruction of artwork. In a statement to the Women’s Social and Political Union shortly afterward, Richardson explained:

She added in a 1952 interview that she didn’t like “the way men visitors gaped at it all day long.”

In 1974, Tony Shafrazi (who is the owner of the Shafrazi Art Gallery in New York and deals artwork by artists such as Francis Bacon, Keith Haring, and David LaChapelle) wrote “KILL LIES ALL” with red spray paint over the work Guernica by Pablo Picasso. Shafrazi was ostensibly protesting Richard Nixon’s pardon of William Calley for the latter’s actions during the My Lai massacre. Luckily, the paint was removed with relative ease from the varnished surface.

On 15 June 1985, Rembrandt’s 17th century painting Danaë was attacked in the Hermitage Museum in Russia. A man, later judged insane, first threw sulfuric acid on the canvas and then cut it twice with a knife. The entire central part of the composition was virtually destroyed. The restoration took 12 years, between 1985 and 1997; since then, the painting has been protected with armored glass.

In 1997, Alexander Brener, is a Russian-Jewish performance artist, and a self-described political activist painted a green dollar sign on Kazimir Malevich‘s painting The White Cross. The painting was restored and Brener was sentenced to 5 months in prison. During the court case, he said in his defense:

The cross is a symbol of suffering, the dollar sign a symbol of trade and merchandise… What I did was not against the painting. I view my act as a dialogue with Malevich.

I am Jesus Christ, risen from the dead!

Toth struck the Piéta 15 times, breaking off Mary’s arm at the elbow as well as part of her nose and eyelid.

A group of bystanders, including an American who repeatedly punched him, tackled Toth almost immediately. The incident, which took place during the Pentecost on May 21, 1972, was triggered by Toth’s long-held fantasy that he was Jesus; he’d even written to the Pope the prior year to demand that he be recognized as the Messiah. Judged insane, Toth was committed to a mental hospital in Italy for two years before deportation back to Australia. He never faced jail time for his actions.

8. The Virgin and Child with St Anne and St John the Baptist

While hanging in London’s National Gallery, this large charcoal drawing created around 1500 by Leonardo da Vinci became a gunshot victim when Robert Cambridge peppered the work with a shotgun he’d hidden under his coat. Though he fired from about seven feet away, the pellets themselves didn’t damage the work. Rather, it was shards from a section of protective laminated glass pulverized by the blast. The result tore a six-inch diameter hole into a part of the drawing containing the Virgin Mary’s robe.

In 1988, The New York Times reported that the restoration involved “an elaborate process in which dozens of tiny fragments of paper were glued back together, one by one.” Cambridge, meanwhile, was confined to an institution for the criminally ill after telling police he’d been motivated by his disgust with the policies of then-Prime Minister Margaret Thatcher.

What Margaret Thatcher had to do with Leonardo da Vinci remains unknown.

On 7 October 2012, Mark Rothko’s 1958 abstraction was defaced as it hung in London’s Tate Gallery by Wlodzimierz Umaniec, an artist, blogger, and sole proponent of an artistic philosophy he dubbed Yellowism. Using a black marker, he wrote “A POTENTIAL PIECE OF YELLOWISM” in the painting’s lower right-hand corner, adding the pseudonymous signature, Vladimir Umanets. Umaniec spent the next year in prison and after his release, professed his regret in an editorial written for The Guardian newspaper.

A rather unusual case, which might not qualify as vandalism, occurred in 1908. An exhibition was set up for May of that year with paintings by Claude Monet, which had already been praised by critics and were estimated at $100,000 (1908 prices). Despite this, Monet decided that he was not satisfied with his work and in a sudden move destroyed all the paintings with a knife and a paintbrush. Ethics discussions broke out: Should an artist have the right to destroy his own work?

At least one expert thought so and praised him for being a true artist rather than a manufacturer, telling The New York Times,

It is a pity, perhaps, that some other painters do not do the same.

11. The Frenzy of Exultations

Another weird story: this famous painting, well known in Poland showing a crazed naked woman riding a wild horse caused a big controversy and a scandal in Warsaw art salons in its time (1894). The exhibition lasted only 36 days because the artist Podkowinski brought a knife on the 37th day and tried to destroy his work, especially damaging the figure of the woman.

The cause of his behavior had not been completely clarified. When Podkowinski painted it he was already in the last stages of tuberculosis, he died one year later at the age of 29.