A Visitor Damages Piece Of Art – No Worries, It Will Be Fixed 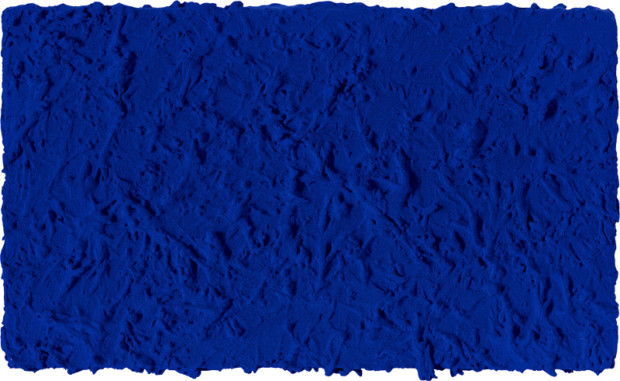 I love Ives Klein. It’s hard to explain as his works are JUST BLUE – or maybe I should say INTERNATIONAL KLEIN BLUE (IKB). But apparently this appreciation can be deadly for Klein’s art.

On August 16th, in The Centre for Fine Arts (Bozar) in Brussels, a visitor trod upon on and damaged a work in the Yves Klein exhibition, Theatre of the Void.

While approaching another work across a gallery space, the visitor inadvertently walked on Pigment bleu sec (Dry Blue Pigment), a shallow wood basin spread with sand and the artist’s signature matte pigment, International Klein Blue (IKB), leaving white footprints on the work and blue material on the floor.

As the museum spokeswomen commented on that horrid event:

“Even though we have several safety measures (warning signs, a partial barrier and a guard), the man was too fascinated [with the other work] to notice all of that,” a museum spokeswoman tells The Art Newspaper. Bozar employees fully restored the work in-situ the same day, re-arranging the sand and adding more IKB. Dry Blue Pigment, first conceived in 1957, must be re-installed with new sand and pigment each time it is shown, the spokeswoman adds, “so it’s not the same as damage to a ‘unique piece’”.

In April, a journalist walked on a similar Klein work at the Musée d’Art moderne et d’Art contemporain (MAMAC) in Nice during a press opening for the show About Nice: 1947-77 (until 22 October).

Following the incident at Bozar, a museum visitor tweeted a picture of the post-damage cleanup, and wrote”

I came for the paintings. But I stayed for performance art.

It’s difficult to say if the visitor will have to pay for anything or will be somehow punished. But for sure it’s a lesson for contemporary art galleries, that they should REALLY be careful how do they display pieces of art.