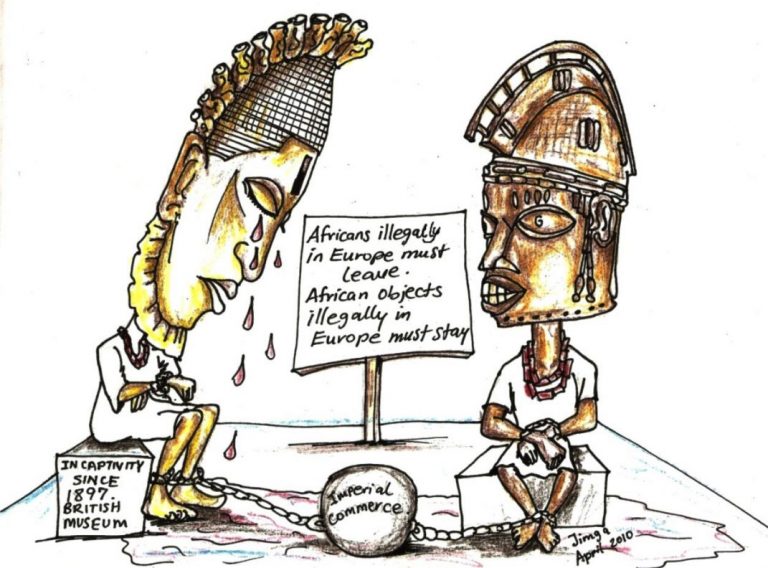 Have you ever wondered how European modern artists were inspired by African art? They certainly didn’t travel to the continent. The answer is colonial looting. It is calculated that 90% of all African art remains outside of the continent! They are mainly in European and North American museums and collections. As a result, African countries have been claiming these objects back since gaining their independence. Unfortunately, though a legitimate request, few attempts have yielded results.

The Scramble for Africa

The colonization of Africa began formally in 1885 with the Congress of Berlin, also known as the Scramble for Africa. Africa and Europe had already a long history of exchanges, but this was different. Without the presence of a single African leader, the European rulers decided the fate of the continent.

They drew artificial borders that hardly matched the current political divisions of the kingdoms and ethnic groups. In the end, a continent three times the size of Europe fell under the control of seven nations. Only Ethiopia and Liberia remain independent.

The Rise of Colonial Looting

Europeans used various strategies to control the territory. One of them was through punitive expeditions, many of which ended with looting. For example, in 1897, the British sent an expedition to the Kingdom of Benin, in modern-day Nigeria. From this event, pieces such as the Benin Bronzes or the Queen Mother Idia of Benin found their way into European collections.

At the same time, anthropology and ethnology emerged to study these cultures. In fact, some museums sent professionals to assess and bring back certain works. For their part, the Church sent priests to convert the people. They destroyed their “pagan” artifacts but sent the most valuable examples to Europe. These objects were exhibited in “missionary museums” where artists surely saw them. The largest one of its kind was l’Esposizione missionaria vaticana in 1925, which consisted of colonial looting from all around the world.

And yet, there were those who believe such masterpieces must have been made by the Portuguese due to their quality!

Many colonies gained their independence in the 1960s. In order to keep stability, they kept the artificial borders. However, they needed to create a national identity. But how could they do it when all their cultural objects were gone? In 1969, the Organization of African Union published the “Pan African Cultural Manifesto.” In it, they called cultural expressions “the cement of every social group.”

People had been calling African art “primitive” since the 19th century. Scholars refused to consider African art as “fine art”. But when modern artists used them as inspiration, they were called revolutionaries and their canvases became well-known masterpieces. Just think for a moment about how we talk about Picasso’s works.

Later, in 1978, the UNESCO director-general, Amadou-Mahtar M’Bow, released A Plea for the Return of an Irreplaceable Cultural Heritage to those who created It. It was important to establish that African states only wanted the most representative objects back.

These men and women who have been deprived of their cultural heritage, therefore, ask for the return of at least the art treasures which best represent their culture, which they feel are the most vital and whose absence causes them the greatest anguish. This is a legitimate claim.

A plea for the return of an irreplaceable cultural heritage to those who created it, 1978, UNESCO.

And this was the start of a long, frustrating, and ongoing fight to recover these treasures.

A crucial element in this issue is the matter of interpretation. Museum professionals studied and taught about these artworks from Western perspectives. Moreover, as much as we love museums, we have to acknowledge that they are Western institutions. Not everyone shares the idea of art as a contemplative product. In many cultures, it serves a further purpose. For example, in Mali, the National Museum lends objects to the community for rituals and retrieves them afterward. These objects were not made to stand in glass boxes.

This is also a matter of human rights. They have a right to their culture and artistic heritage. African cultures put great importance on oral tradition, unlike the West, which focuses on written records. Many pieces help them tell stories and teach the next generations about the past. Furthermore, some play a role in important ceremonies.

The tragedy is that the knowledge systems and the cultures and the belief systems that produce those objects, don’t exist in the same way they did.

In truth, there are a few international legal instruments which African countries can use, and those processes take plenty of resources that the states cannot easily spare.

In general, museums refuse to give the pieces back. Colonization is one of those hard pills to swallow. They would have to accept their responsibility in the colonial looting. Furthermore, for centuries across the globe, looting was normal. So, even if they say yes to Africa, they’d have to say yes to the rest of the world, including European countries like Greece. Can you imagine how many pieces these museums would lose? And, in consequence, how many tourists and revenue?

Over time, objects so acquired – whether by purchase, gift, or partage – have become part of the museums that have cared for them, and by extension part of the heritage of the nations which house them.

Declaration on the Importance and Value of Universal Museums, 2002.

They appeal to cultural universalism, in which culture belongs to all humanity. Furthermore, they call themselves “universal museums.” According to them, they are merely the repositories of these pieces. In the spirit of sharing, they make them accessible to everyone. However, few people from developing countries can afford a trip to Europe, or the objects remain in storage. And yet, they still have an ace up their sleeve: security.

Yes, they claim those countries do not have the proper security to preserve those pieces and that some events cause worry. In 2012, a group of extremists destroyed 10 religious and historical monuments in Timbuktu, Mali. Actually, it became the first case at the International Criminal Court which focused exclusively on the destruction of cultural heritage as a war crime. Therefore, many people believe that returning the colonial looting would put the pieces in grave danger.

But There Is Hope!

More people are becoming aware of the injustices of colonization. Additionally, they see restitution as an ideal way to heal old wounds. Public opinion has certainly put pressure on Western governments and museums to at least discuss the return of colonial looting. Some have responded better than expected. In 2017, President Macron visited Burkina Faso where he gave a speech at the University of Ouagadougou.

I cannot accept that a large share of several African countries’ cultural heritage be kept in France. There are historical explanations for it, but there is no valid, lasting and unconditional justification. African heritage cannot solely exist in private collections and European museums. African heritage must be showcased in Paris but also in Dakar, Lagos and Cotonou; this will be one of my priorities. Within five years I want the conditions to exist for temporary or permanent returns of African heritage to Africa.

Extract from Emmanuel Macron’s speech at the University of Ouagadougou on November 27 2017. Élysée.

Later on, The Restitution of African Cultural Heritage. Toward a New Relational Ethics was published; commonly referred to as the Sarr-Savoy Report. According to the plan, between 2018 and 2022, 90,000 pieces would return to their places of origin. Naturally, African states support the initiative while museums resist it. Whether they reach the objective or not is still to be seen.

Meanwhile, other countries are addressing the return of their art from colonial looting. On April 30, 2021, Germany agreed to the return of the Benin bronzes they held. But there are more in the British Museum and elsewhere. And sometimes, certain pieces return as “donations”, which might not be the ideal way, but at least they go back for a time.

Of course, not only governments are demanding these objects back. Research and discussions on heritage justice are advancing. African civil society, scholars, art professionals, and artists are claiming them too. For example, Nigerian artist Peju Layiwola and other African artists participated at the Resist! The Art of Resistance exhibition in Rautenstrauch-Joest Museum in Cologne, Germany. The purpose was to discuss the restitution of colonial looting, especially from the Punitive Expedition to the Benin Kingdom.

In this cartoon, Nigerian artist Jimoh Ganiyu (Jimga) managed to address both the restitution of colonial looting and the migration crisis in Europe. The message is brutal and invites reflection. On the one side, there is the reluctance of museums to give back those objects. On the other, the xenophobic and racist narratives at the European political and social arena.

Additionally, African museums have joined the claim. In 2021, Nairobi’s National Museum was home to a very peculiar exhibition. The project Invisible Inventories showed empty cases to visualize the lack of cultural objects that remain in the West.

A plea for the return of an irreplaceable cultural heritage to those who created it. UNESCO, 1979. Accessed 3 Jul 2021.

K. Opoku: Declaration On The Importance And Value Of Universal Museums: Singular Failure Of An Arrogant Imperialist Project. Modern Ghana, 2013. Accessed on 3 Jul 2021.

Today we’ll go back in time to the 1500s when the wealth of the Benin Empire (in contemporary Nigeria) was at its peak: when Europeans traded...