…a Government official, tears streaming down his face, burst into the dismal dining-room crying: ‘Guernica is destroyed. The Germans bombed and bombed and bombed.’ The time was about 9.30 p.m. Captain Roberts banged a huge fist on the table and said: ‘Bloody swine.’ Five minutes later I was in one of Mendiguren’s limousines speeding towards Guernica. We were still a good ten miles away when I saw the reflection of Guernica’s flames in the sky. As we drew nearer, on both sides of the road, men, women and children were sitting, dazed. I saw a priest in one group. I stopped the car and went up to him. ‘What I happened, Father?’ I asked. His face was blackened, his clothes in tatters. He couldn’t talk. He just pointed to the flames, still about four miles away, then whispered: ‘Aviones. . . bombas’. . . mucho, mucho.’

The words of the first war correspondent to enter the city of Guernica, Spain, on 26th April 1937: Noel Monks 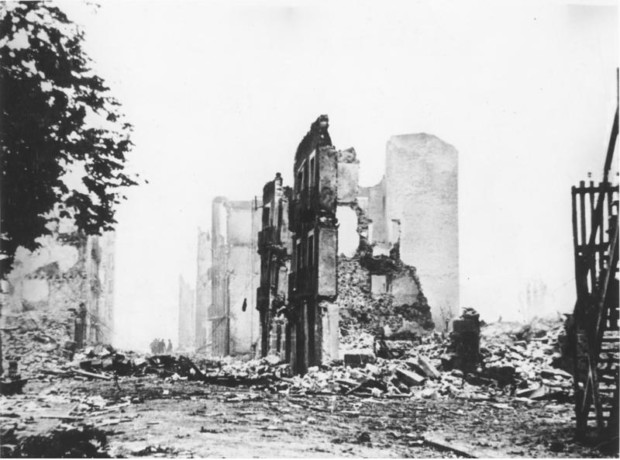 In early 1937, Pablo Picasso had been commissioned to produce a work for the upcoming Exposition Internationale des Arts et Techniques dans la Vie Moderne at the World Fair in Paris.  Picasso had begun the work but the bombing in Guernica changed his focus.  After reading about the atrocity, he set to work: 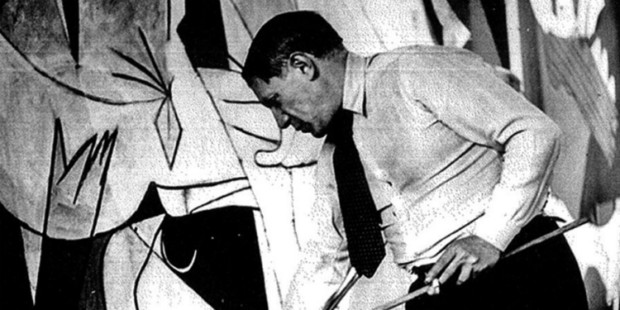 Picasso at work in Guernica

On a mural sized painting, using a muted black, white and grey palette, Picasso produced what is undeniably one of the most compelling antiwar canvas in history. While working on this he said, “The Spanish struggle is the fight of reaction against the people, against freedom. My whole life as an artist has been nothing more than a continuous struggle against reaction and the death of art. How could anybody think for a moment that I could be in agreement with reaction and death? … In the panel on which I am working, which I shall call Guernica, and in all my recent works of art, I clearly express my abhorrence of the military caste which has sunk Spain in an ocean of pain and death.“

The pain and anguish of the victims is palpable in this work. The mother holding her dead infant howls helplessly to the sky; her head pulled back to an almost inhuman position. The screams are mirrored in the man on the right, engulfed in flames,  Bodies lie crumpled underneath the ruins in distorted angles.

Despite its size, you can imagine the speed at which Picasso worked at this. It was completed in just 35 days!

Picasso was not the only artist to be affected by the atrocity. Philip Guston, born in Montreal, of Ukrainian Jewish parents and raised in Los Angeles, had recently been in Mexico working with another artist, Reuben Kadish on an anti-Fascist mural: The Struggle Against Terrorism. 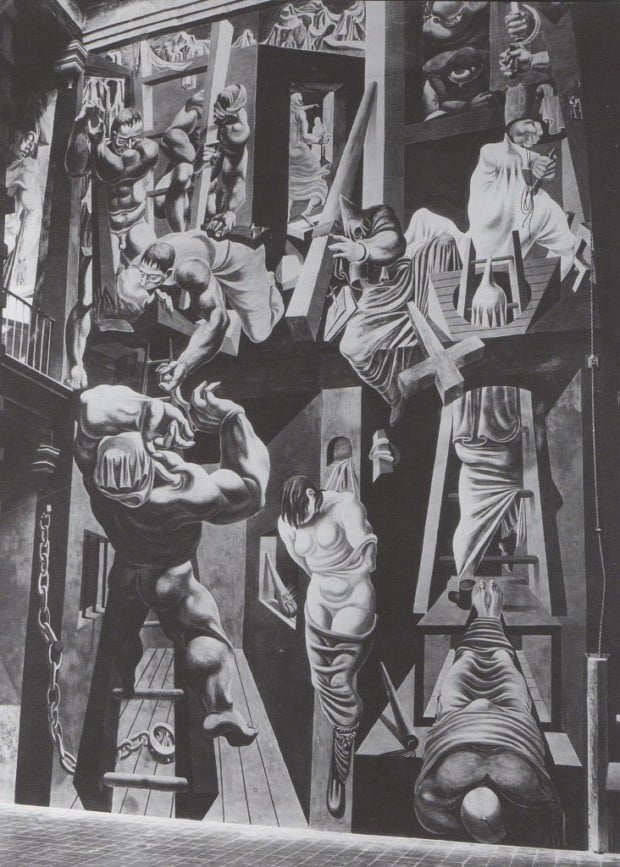 Panel from The Inquisition, Reuben Kadish and Philip Guston (1935)

Guston was horrified by the reports of the Fascist bombing and the work he produced recalled the Renaissance style through the use of the tondo and with the colour palette of reds and greens: 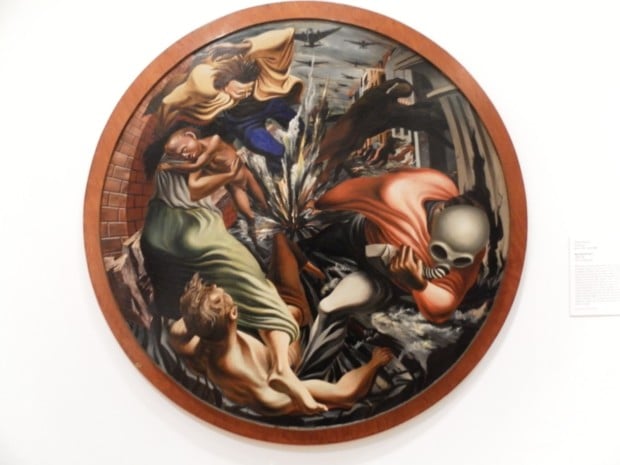 Bombardment by Philip Guston (1937), The Philadelphia Museum of Art

This painting, usually to be found at The Philadelphia Museum of Art, is currently part of the Royal Academy’s exhibition, American After the Fall and is entitled, ‘Bombardment’.  The bombers deliver their deadly cargo centrally in the painting.  The resulting explosion propels people and debris towards the viewer at an enormous speed. From the impact of the bomb, a charred figure is thrown sideways; his shadowy figure is ghost-like. At the top of the circle, a man, with flailing arms is sent skywards with nothing to stop his movement. As in Picasso’s work, Guston depicts a mother, dressed in green, unable to protect her naked infant from the explosion. She holds him in the pose of the Madonna.

At the bottom, a partially naked man lies in the pose that is reminiscent of Caravaggio’s depiction of the crucifixion of St Peter: 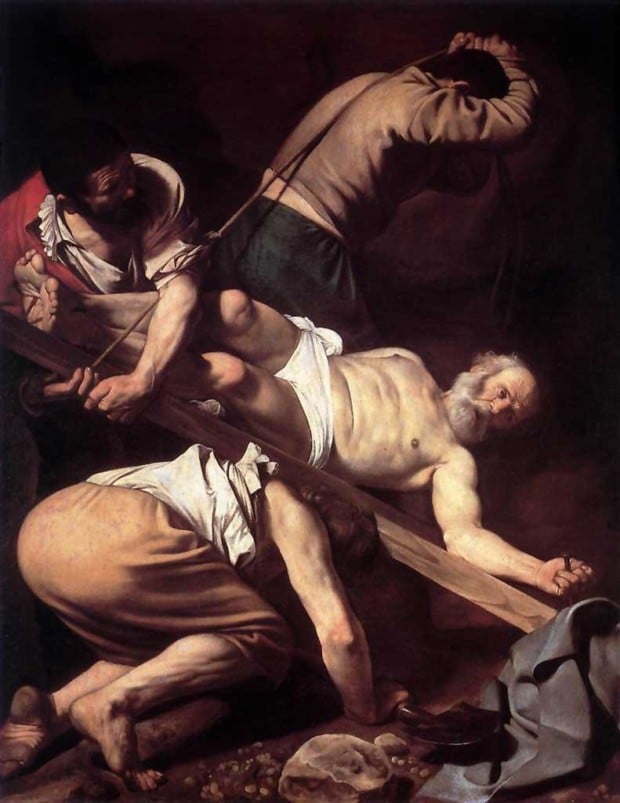 The figure clad in a red cloak, face covered with a gas mask completes the scene.  Nothing was going to save these people from the atrocity, not the protection of the bricked tunnel they are in, the corrugated iron to the right, or the gas mask itself from the cavalcade of planes overhead.

Although not as famous as Picasso’s anti-war declaration, Guston’s view of Guernica is as powerful a statement as an artist can make in a bid to bring awareness and commemoration to a tragic event.

To find out more: