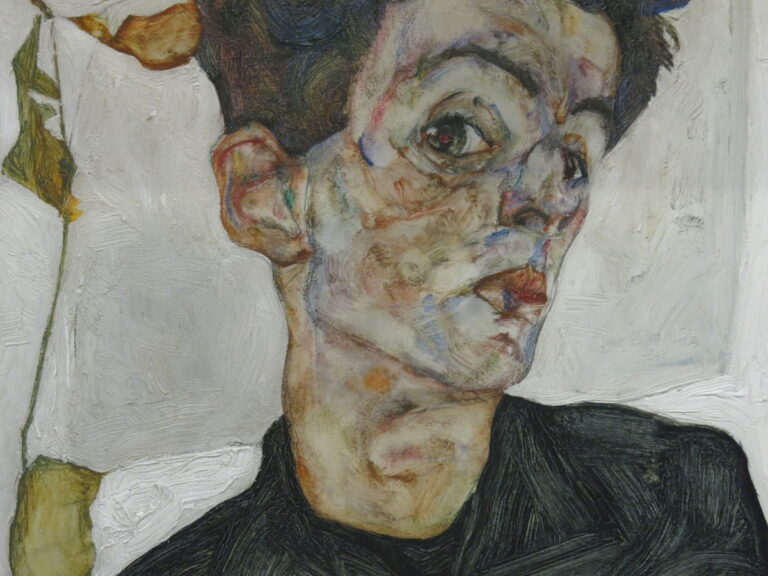 Have you ever been under the impression that a piece of art you’re looking at is so powerful that it can subvert the roles of a viewer and a subject? That suddenly it’s you who becomes the observed, while the work has become a mirror – a spectrum of impressions and emotions that originate somewhere between the past and present – between you and your environment. Such a work may even be able to unearth buried desires or move the viewer to tears, as well as possibly become a source of rejection or discomfort, but still, you won’t be able to turn your look away from it.

One artist produced artworks that generated such feelings – Egon Schiele, whose works at once bring sincerity, passion and violence (everything that he himself experienced, a short and tumultous life that will leave a legacy of pieces that explore the meandering corridors of our very nature).

But first, we must get acquainted with the Empire in which Egon Schiele was born. On June 12, 1890 in the Austro-Hungarian capital- Vienna, a cradle of the revolutionaries of thought and arts, Gustav Klimt, Koloman Moser, architects Joseph Hoffmann and Joseph Maria Olbrich among others, brought to life the now famous Viennese Secession movement, transforming the city with the colors and patterns of Art Nouveau. Writers such as Rainer Maria Rilke, Franz Kafka, Robert Musil, and Arthur Schnitzler, were conquering the literary world, while the concept of psyche will never be the same again with Sigmund Freud’s development of Psychoanalysis, a theory and practice which will have a profound influence on Egon Schiele and the Expressionist movement.

120 years later I find myself in Paris at the Louis Vuitton Foundation, which has brought together more than 100 works by this master of line. I put on my headphones, launch a playlist featuring composers of the time (Arnold Schönberg, Alexander von Zemlinsky), and step into the escalator. I will have the great pleasure of taking you with me into the life and work of Egon Schiele.

I enter the first room understanding that this exhibition will have a tone of intimacy – few paintings, many pencil drawings, some watercolours and gouaches. I am in the presence of precise line that knows in its simplicity how to redefine ideas of shapes of a body which is full of life, dancing or sometimes with mesmerizing stoicism playing with the idea of death itself.

I move slowly from work to work, a spectator of the obsessive and the indecent, the scanning of beings is done with a disconcerting softness, striking contrast. These drawings stare at me – I cannot go further, my chest opens and like a reptile losing its protective molt, Schiele exposes the models with ease. Nothing protects us during our contemplation, I can only imagine the impressions that the spectators of the last century may have experienced. But here the public has gathered for it, I can feel the desire for confrontation of those who surround me. Informed or not, many seek an indelible experience during which gives us the luxury of isolation in an exhibition that makes the surrounding masses disappear.

The word concession and its synonyms have no echo in Egon Schiele’s life and works. It observes and represents a part of human depth that is not always pleasant to look at.

I continue to move in space, change the music to Gustav Mahler and let myself be carried away by the environment. I see all of those twisted bodies, bent in a macabre dance. Schiele recomposed anatomy, landscapes, and still lifes in the manner of Dr. Frankenstein from Mary Shelly’s famous novel, an attempt at stitching.Using a palette that explores all the camaïeux of the flesh – pink, red, yellow, and black. Egon Schiele, however, does not only shock, but he also introduces us into softness and sincerity.

I could go on, but I already find myself in the last room… A stunning exhibition which, despite a large number of works, is quite short. So I will leave you here, restart my playlist and go back to the first room because I am not quite ready to leave yet.

An hour later I am in a café not far from the Vuitton Foundation trying to conclude this article. Honestly, I am stunned, my experience with Egon Schiele’s work has left me feeling all the colors of his life. I allow myself a presumptuous interpretation of the echo and vibrations that I could feel in the confrontation with the pieces. I saw it in some of my fellow spectators – silent, thoughtful as if violence or desire have been expressed and liberated through a meditative contemplation of his works.

My impression of this artist is confirmed. I feel a deep gratitude for Egon Schiele, that he has given me a transformative view on humanity, reminding me of the fragility of our nature, a fragility that is rarely on view or perceived by those of us living in cities where we are dehumanized during the day and overwhelmed during the night.