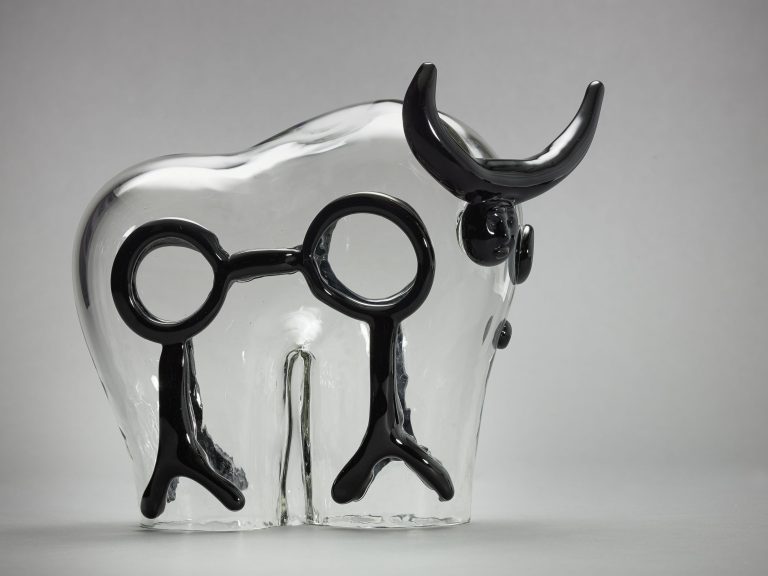 This is a story of an Italian man, Egidio Costantini, who was a radiotelegraph operator, a bank cashier, and a manual laborer extracting oils from wood. But then one day he became fascinated with a physical phenomenon of vitrifying and decided to set off for a journey of glass-making. But since he had no idea about art, he decided to invite the most renowned artists of his time like Picasso, Cocteau, Braque, Arp, Chagall, Fontana, and Le Corbusier to help him. And they did. They formed a unique collective called the Angels’ Forge.

The revelation happened when Costantini worked in the wood distillery. After one of the furnaces had cooled, the walls vitrified, gaining a fascinating green and blue crystallization. Inspired by this view, Costantini moved to Murano island in the Venetian lagoon and began working as a salesman of glass. In the meantime, he experimented with glass-making but realized he would never make a vital contribution to the glass world without the help of professional designers who would provide him with fresh artistic ideas. So he wrote over 50 letters to various artists and the first one to respond was the Surrealist painter Gino Krayer, who introduced Egidio to the elitist circle of Surrealists.

The meeting with Oskar Kokoschka in 1952 began the snowball effect: Egidio made friends with Le Corbusier, Alexander Calder, Pablo Picasso, and Jean Cocteau. The poet and painter André Verdet described the meeting between Picasso and Costantini:

When he (Picasso) saw Costantini’s work, his immense curiosity was simulated right away and they started working together almost immediately (…) Between Picasso, who sensed the flame, and Egidio, who senses the molten glass, the bubble, the glass becoming opaque, becoming denser or becoming clearer… Their complicity was complete and Egidio knows this; he’s a magician too.

It was Cocteau who came up with the name for the newly founded artists’ cooperative. When Costantini told him he needed a name for his workshop, Cocteau pondered for three hours producing the weirdest names. Finally, he suggested “the Angels’ Kitchen”, the name of a work by Bartolomé Esteban Murillo in the Louvre, and the title of an opera and an American comedy film, but Costantini thought it was more suitable for a restaurant than a glass studio. Then Cocteau concluded to make it the Angels’ Forge and, a while later, Jean Arp designed for it a star which was to become the emblem of the place.

In 1955, they held an exhibition in Germany and although it was a success with the public, they barely sold anything and Costantini was ruined. He paused the activity of his workshop and everything would have ended there had it not been for the help of a sponsor named Peggy Guggenheim, who at that time had already lived in Venice and had heard of Costantini’s collaborations. Her patronage meant for the Angels’ Forge the best period of activity, starting with a show in her house at the Grand Canal in 1964 and, later, an exhibition in MoMA in New York.

Another blow to Costantini came with big water: on November 6, 1966, Venice was submerged by the biggest flood of the century. The drawings, designs, and works stored in the Forge all turned into mud. Yet, Egidio didn’t give up and decided to make true the dream of Max Ernst: to produce a giant glass set of chess. Despite suffering a heart attack, he would go to the furnaces every day to finally make a masterpiece measuring 4 x 4 m. He called it the Immortal, which I think is a perfect title for a work that summed up the paradoxical nature of both the material and the Angels’ Forge.