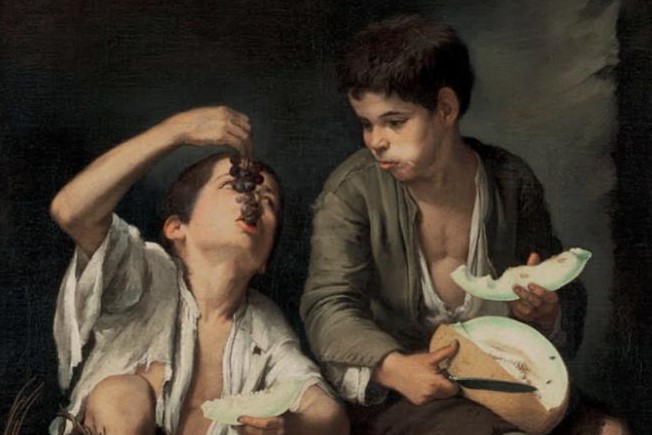 Children Eating Grapes and a Melon, currently located in the Alte Pinakothek, is one of the most famous paintings by Bartolomé Esteban Murillo. This Spanish Baroque painter is best known for his religious works, but he also painted scenes of everyday life portraying children and the poverty of his native city.

Bartolomé Esteban Murillo was baptized on January 1, 1618. We don’t know his exact birth date, but he was probably born in December of 1617 (since back then children were baptized in the days right after their birth). Murillo worked pretty much all his life in his native city – Seville, south of Spain. He was a very popular artist. By the 1650s, he was considered the city’s best painter. He was also the co-founder and first president of the Academy of Fine Arts of Seville.

The painter’s fame wasn’t restricted to his city. In 1658, Murillo took a trip to Madrid, where he probably got in touch with other important Spanish painters (such as Velázquez and Zurbarán) and studied the works of the great masters in the royal collections. In 1682, while painting an altarpiece in Cadiz, he fell off a scaffolding and died from the injuries of this fall.

The Context of Seville

Seville was one of the most important and commercial Spanish cities in the 17th century, but there was also a lot of poverty there. As a commercial city, it attracted a large number of beggars and homeless people. Adding to the economic and social crisis of the time, in 1649, the Great Plague of Seville reduced the city’s population by almost half.

Murillo often represented the poverty of his city. Even though he is best known for his tender and sweet religious paintings, he also painted many genre scenes. Genre paintings depict ordinary people involved in scenes of everyday life – such as the one we’re about to see. Already in the 17th century, Murillo’s genre paintings were being sold throughout Europe by art dealers. Today, they are all located outside of Spain.

Children Eating Grapes and a Melon shows two boys in a dark background sitting close to each other, both eating. The boy on the right sits on a wooden stool and a melon lies on his thighs. As his right hand holds the knife used to cut the melon, his left hand holds a bitten piece of the fruit. His mouth is full and there’s a melon seed on his cheek. The boy on the left sits on the floor, next to the basket of grapes. In one hand, he holds a slice of melon, while in the other he brings a cluster of grapes to his mouth.

We can see the boys are very poor. They are both barefoot and their clothes are ragged and torn. The basket that holds the grapes is filled with succulent fruit, but its handle is broken. There’s a feeling of dirt and filth to the image. The boy’s feet and nails are very dirty, and two flies lie in the cut melon. On the floor, we can see scraps of the fruits – melon crusts, seeds, and the stem of an already eaten bunch of grapes. The muted palette of the painting adds to this idea of dirtiness. The colors are mostly dulled or greyed, not vibrant or saturated.

Even so, the painting is delicate. The two boys are not portrayed individually or in their own isolated universes. They are sharing the fruit and interacting; as their eyes meet, the intimacy between them is shown. There’s also a certain gluttony in the way they eat: one of them has a melon seed on his cheek and the other one holds an entire cluster of grapes to his mouth. This brings a lively tone to the image and to the moment shared between the two figures.

Both the lighting and the brushstrokes are soft, bringing to the painting a gentleness and a sweetness characteristic of Murillo’s work. The lighting, which arrives from the left of the painting, forces the viewer to focus their attention on the boys. It does so by emphasizing the few points of bright color in the painting: the left boy’s shirt and the melon on the lap of the other one. This lighting reminds us of the treatment used by Caravaggio. Murillo certainly knew of the Italian school, since this is not his only painting where we can see this influence.