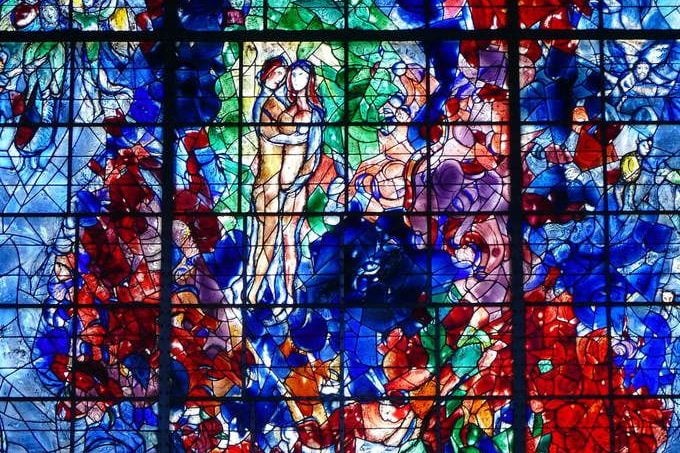 Marc Chagall, Paris Through The Window

When I went to see the Reims Cathedral, I didn’t expect to find Marc Chagall’s stained glass windows in a centuries-old church. Fascinated by this fusion of tradition and modernity, I decided to investigate Chagall’s work even more, and to my surprise, I found a few more Chagall windows all over the world.

Reims Cathedral belongs to the world-famous group of French cathedrals dedicated to Virgin Mary and is virtually a symbol of medieval Europe. Therefore, it may come as a shock when one encounters these three modern-looking stained glass windows in the church’s apse.

Marc Chagall was commissioned in 1968 to re-define the medieval interiors with his painterly windows that despite their contemporaneous looks still preached centuries old Christian tenets. The far left window focuses on the Old Testament and depicts a motif of Tree of Jesse, that is genealogy of Christ. The central piece intertwines the lives of Abraham and Christ and is crowned with the scene of Christ’s Crucifixion. The third window, on the other hand, tells the story of French monarchy, imagining coronations of French kings.

In 1970, Chagall offered to make a set of stained glass windows for the Art Institute of Chicago to express his gratitude for the support that the Chicagoans showed when he stayed in the city. The windows were completed in 1977 and they celebrated the bicentennial of the creation of the States. The six panels render America as the country of freedom and culture, and this subject made them famous as America Windows.

Chagall was born to a Lithuanian Jewish family near Vitebsk (today Belarus) and always remembered his Jewish heritage. He made 12 windows, which represent 12 Jewish tribes described in the Bible, and called them a gift to all Semitic people who lived in Jerusalem in the past. He also said:

All the time I was working, I felt my mother and father looking over my shoulder; and behind them were Jews, millions of other vanished Jews – of yesterday and a thousand years ago.

As it turns out, not only the Reims Cathedral, but also the church in Metz has its own Chagall windows. He worked on them for two years, from 1958 to 1960, when he was over 70 years old. The Saint Stephen Cathedral is also called “Good Lord’s Lantern” as it has the largest expanse of stained glass in the world. Similarly to Reims, the Metz church hosts colored windows from the 13th, 14th and 20th centuries.

When the Nazis occupied France, Chagall had to flee. With aid from Alfred Barr of the Museum of Modern Art, he managed to escape to the United States. Many years after the war, he decided to create a set of windows for a church in Mainz, Germany, to advocate Jewish-German reconciliation. He started in 1978 and completed his luminous work shortly before death at the age of 97.

You can find more of Chagall’s stained glass windows in Switzerland, the UK, and at the UN building in New York. Have you seen any of them? Let us know in the comments!