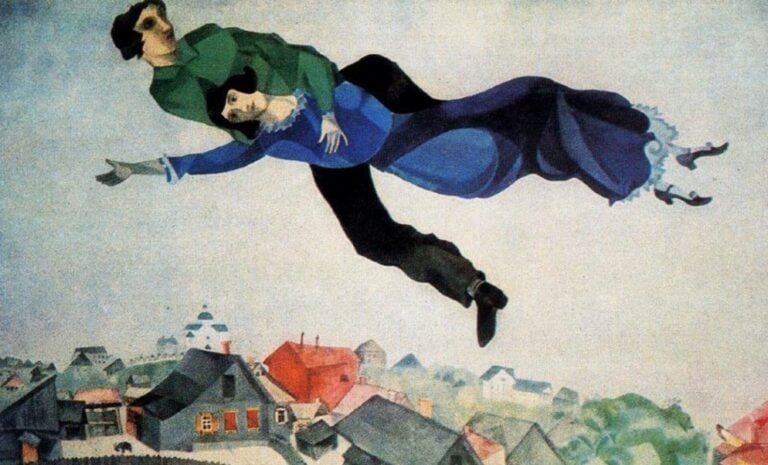 Valentines or not, a love story is always a good read, especially if it's such a magic and touching story as the one between Bella and Marc Chagall. Sad end guys, so prepare.

Marc Chagall, Bella with white collar, 1917, private collection[/caption] They fell for each other in 1909 in Saint Petersburg. Bella Rosenfeld, who was a 19-years-old daughter of a wealthy Russian jeweller, and Marc, seven years her senior, a painter still attending an art school. They both said it was love at the first sight. Bella, who was to become a talented writer, described how Marc looked on their first encounter: When you did catch a glimpse of his eyes, they were as blue as if they’d fallen straight out of the sky. They were strange eyes … long, almond-shaped … and each seemed to sail along by itself, like a little boat. Marc also wrote about this meeting in My Life, his autobiography: Her silence is mine, her eyes mine. It is as if she knows everything about my childhood, my present, my future, as if she can see right through me. 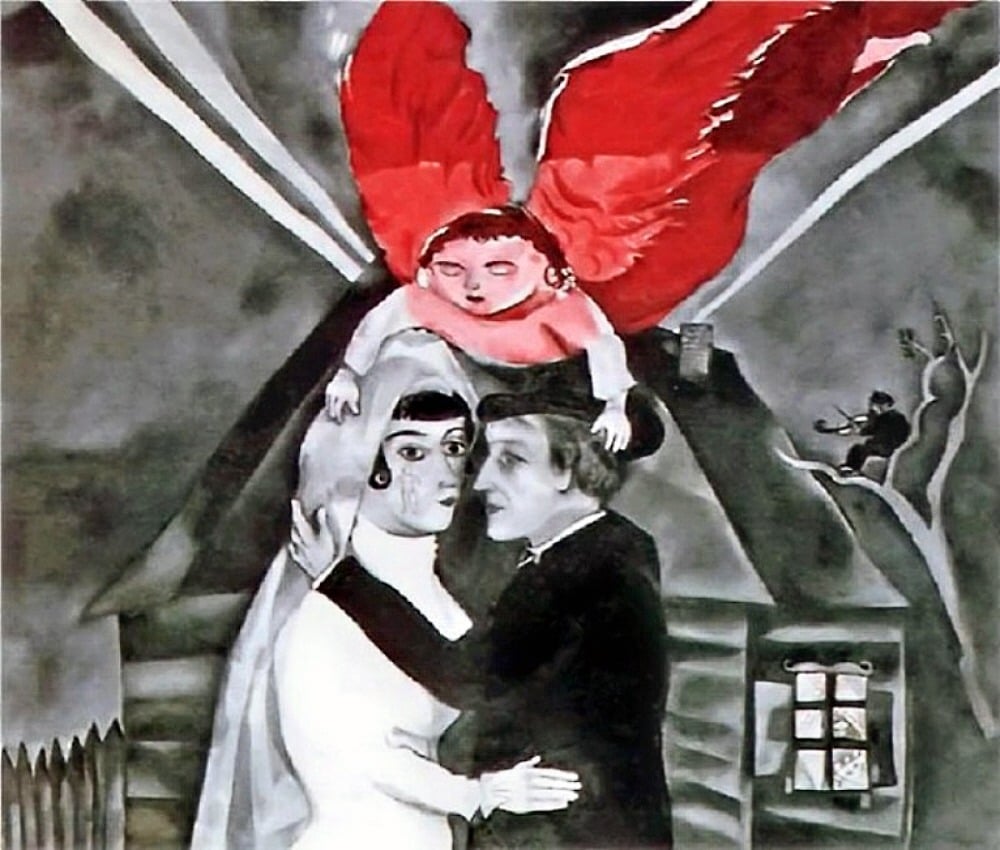 Marc Chagall, Wedding, 1918, Tretyakov Gallery, Moscow, Russia[/caption] In 1911, Marc left for Paris to study art from the leading artists of his day leaving Bella in Russia. However, he didn't speak French and the beginnings were very tough as he "felt like fleeing back to Russia, as he daydreamed while he painted, about the riches of Russian folklore, his Hasidic experiences, his family, and especially Bella". He stayed in Paris until 1914 when he couldn't last any longer without his fiancée, who was still in Vitebsk. He thought about her day and night, writes Baal-Teshuva, the artist's biographer. Chagall, afraid of losing Bella, accepted an invitation from an art dealer in Berlin to exhibit his work because he wanted to later continue on to Belarus and marry Bella, and then return with her to Paris. 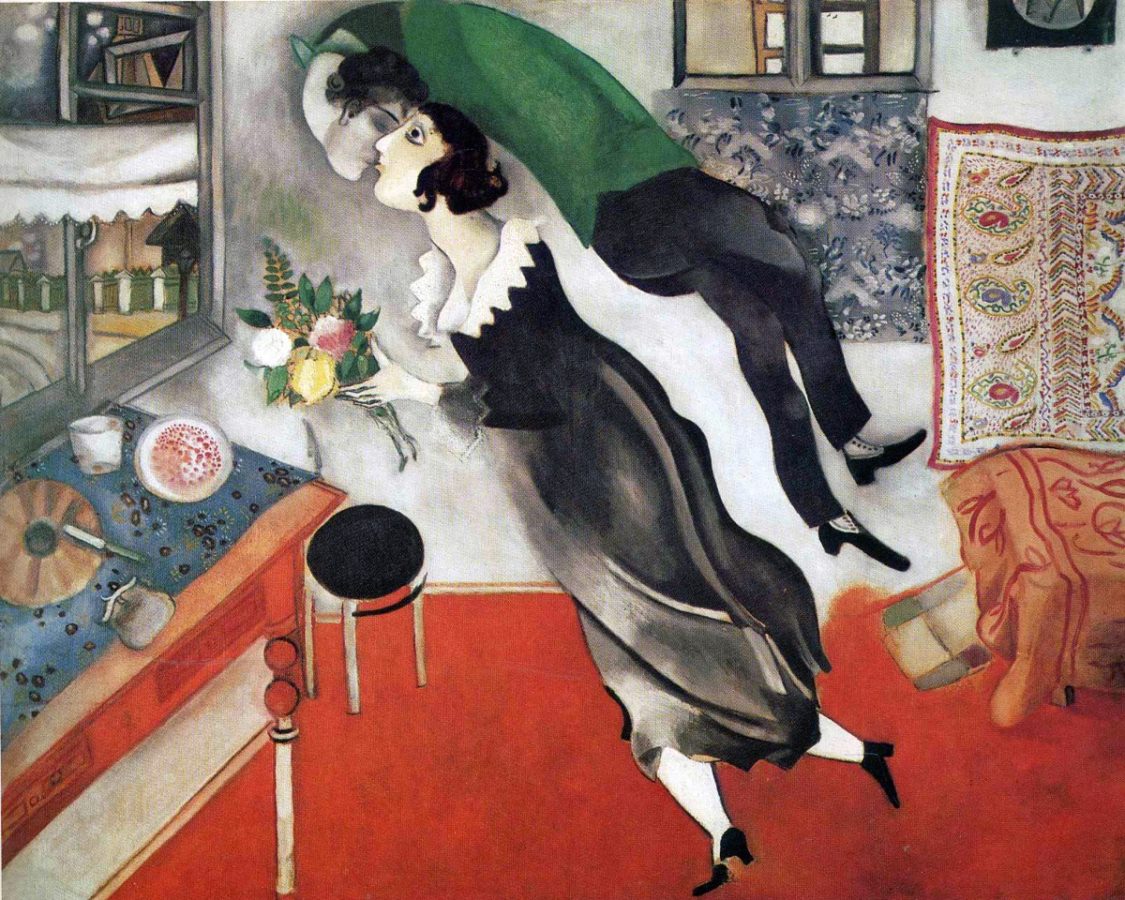 Marc Chagall, The Birthday, 1915; Museum of Modern Art (MoMA), New York City, NY, US[/caption] The next challenge was to convince Bella's parents that he would be a suitable husband for their daughter. He had to demonstrate that despite being just a painter from a poor family he would be able to support her. They married in 1915 and Bella quickly became Marc’s primary muse who featured on his canvases for the rest of his life. In 1916 they had a daughter Ida but that didn't stop Bella to begin acting as her husband's  manager. After the end of the WWI, they moved to France where Chagall could spread his painterly wings. 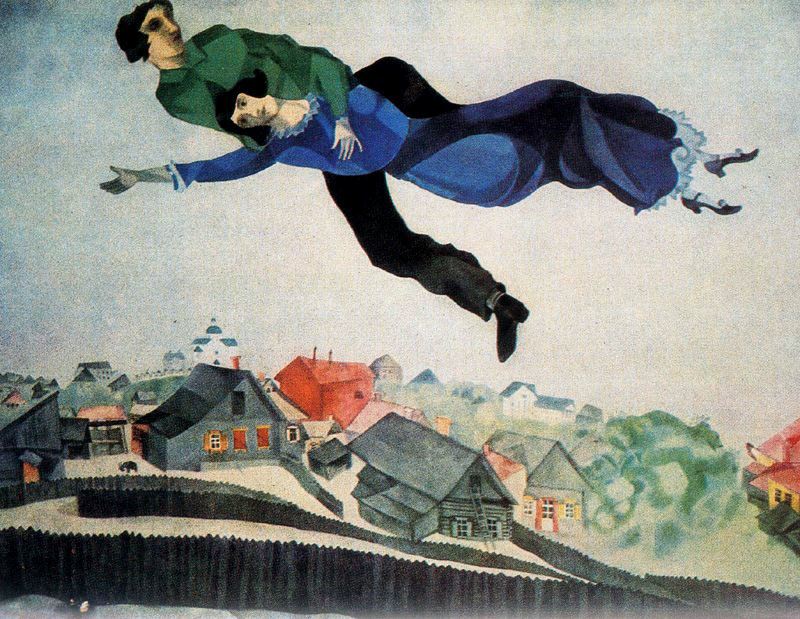 Marc Chagall, Over the town, 1918, Tretyakov Gallery, Moscow, Russia[/caption] The strength of their love is documented in his paintings. Very often Chagall depicted himself and Bella flying over various cities. As if the love they shared was stronger than the gravity itself...

André Kertész, Marc and Bella Chagall, Paris, 1929[/caption] The years passed and the second world war broke out. With the help of their daughter, the Chagalls escaped to the States. Yet, suddenly, Bella died. She had a virus infection, which was not treated due to the wartime shortage of medicines. The grieving Chagall stopped all work for many months, and when he began again, his first pictures were concerned with preserving Bella's memory. Moreover, he kept her notebook which he kept on illustrating for the next 20 years! He filled the blank pages with movingly colourful portraits of them both together.

If you would like to read more romantic stories, check out "the love story" section in DailyArt Magazine.