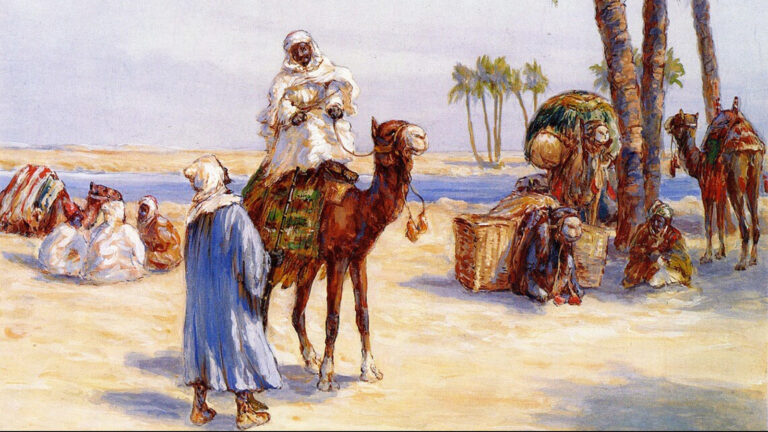 Louis Comfort Tiffany was famous for his beautiful stained glass, decorative arts, and interiors. (His father, Charles Lewis Tiffany, was even more famous for his very successful jewelry company with its iconic blue boxes.) However, not many people know that Louis Comfort Tiffany was an accomplished painter long before he became involved in any other arts. His paintings are colorful and often exotic. Let’s take a look.

Louis Comfort Tiffany, untitled painting, location and date unknown.Louis Comfort Tiffany, untitled. Private collection. Many of Tiffany’s paintings show people and places in the Middle East. As a young man, Tiffany took several trips through Europe and North Africa, and he often painted what he saw there. The architecture, people, and culture of North Africa seemed to fascinate him, and they formed many of Tiffany’s most striking scenes. You can definitely see this influence in his decorative arts work as well. He was hardly alone. In the 19th century, more and more artists became interested in art from the east. This trend was known as Orientalism, and it’s probably most familiar in paintings like the French artist Ingres’s La Grande Odalisque. Tiffany’s paintings of Orientalist subjects got him a lot of recognition. In fact, he was elected to the National Academy in New York at only twenty-three years old. Many of Tiffany’s paintings are done in watercolor, which is both easily portable and was one of Tiffany’s favorite media.

Although Tiffany eventually switched his focus to his design work at Tiffany Studios, he continued to paint throughout his life. Naturally, his skill at painting came in handy when making cartoons (design sketches) for stained glass windows. He made many of these, but he also painted watercolors and oils for their own sake. Tiffany’s later paintings sometimes focused on his family and their travels in the eastern United States. They also often included flowers and other landscape elements painted in the Impressionist style.

You might be surprised looking at Tiffany’s paintings since most of them don’t look anything like his works in glass. So, let’s look at one that does. It’s called Flora, and it appears above. The painting shows a procession of ethereal women gathering in a beautiful field of flowers. They celebrate another woman who seems to be the personification of spring. It’s easy to imagine this same image appearing on one of Tiffany’s stained glass windows. His use of color and light are clearly spectacular in any medium. This work also shows Tiffany’s involvement with the Aesthetic Movement, a style which is well-known for beautiful and otherworldly scenes like this one.

If you are interested in seeing some of Tiffany’s paintings in person, you might like to visit The Charles Hosmer Morse Museum of American Art in Winter Park, Florida. The museum owns a major collection of Tiffany’s work, much of it from Tiffany’s Long Island estate called Laurelton Hall. The Metropolitan Museum of Art in New York owns a lot of his work as well.