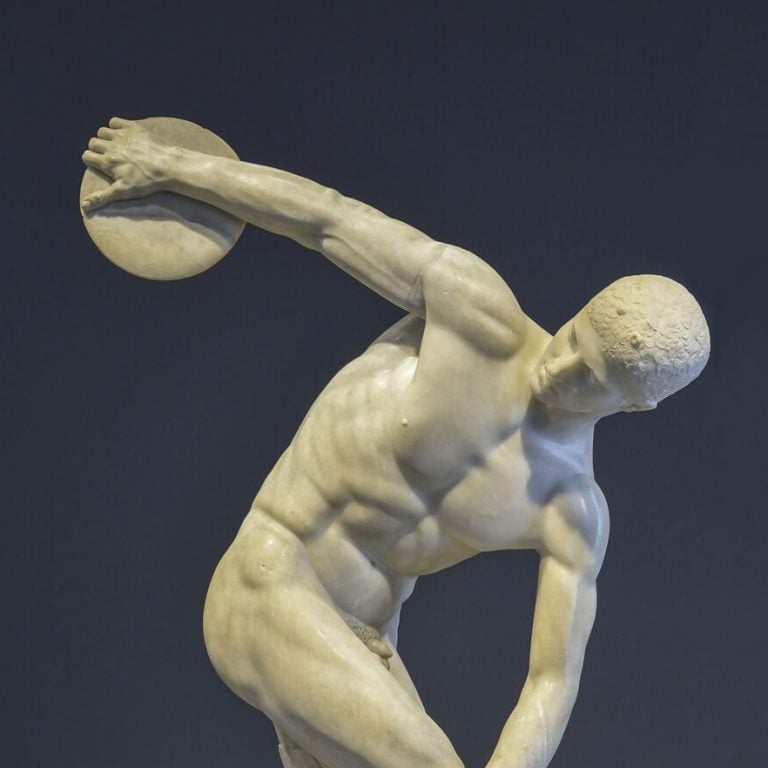 The idea of timeless beauty is fascinating. Also, it’s a great concern for lovers of art history. Conceptions of beauty in Western art history have many roots in the ancient Greek athlete. This is partly due to the pedestal that late 18th century scholars put Greek art upon. Nevertheless, the influence of Greek athletes is undeniable. In art terms ‘ancient Greek’ spans numerous periods and places. Let’s take a tour of famous Greek athletes in art.

Chronologically, when studying Greek art, many begin in the Mediterranean basin (also called the Aegean or the Cyclades) in the long span of 3000 BCE to 1450 BCE. Simply, the Minoans’ name comes from the mythical King Minos of Crete. Scholars study ‘palaces,’ such as Knossos, connections throughout the Cycladic islands, and developments over time. The Mycenaeans come later, around 1600-1100 BCE, and exist largely on mainland Greece. Some scholars think these cultures were in existence within the living memory of when the Homeric epics were written. Partly, this is why the study of Minoan and Mycenean Art can be seen as part of the study of ancient Greek art more broadly.

The boxer fresco on Santorini

One of the Cycladic islands, Santorini (ancient Thera), existed in the overlap between Minoan and Mycenaean cultures. Like the much later Roman Pompeii, Akrotiri was preserved by a volcanic eruption, although the date of this event is contestable. Due to the nature of this fateful end, the town, its artifacts, and its art survive to be studied. Notably, the wall paintings and frescoes that adorn the inner walls of buildings. Relevant to our investigation into athletes of ancient Greece is this depiction of boxers. We don’t know for sure, but the blue colorings on their scalps may be a designator of age. The proportions of the figures also suggest that these athletes are possibly children.

You can delve further information on the art of the ancient Mediterranean by reading about Cycladic figurines here.

Amongst the iconography of the artifacts at Minoan Knossos on Crete is the imagery of bulls. The cultural significance is a bit of a mystery, but symbols of horns seem to pervade the palace. One of the most exciting facets of this is the tantalising idea of a practice of bull-leaping, perhaps as a form of ritual. The Bull Leaping fresco (also known as The Taurodor) is one of the most completely restored from the site. The colorings of the figures may signify anything from gender or status to age.

With Mycenaean artifacts, we get a strong impression that being a warrior was important. There is an iconography around ‘warriors,’ which is very pronounced in burial practices. Excavated in 2017, The Pylos Combate Agate is a sealstone that was part of a tomb near the palace at Pylos. Incredibly it is only 3.4cm in width! Consequently, it is noteworthy for its exceptionally elaborate engraving. Note the musculature, sinews, and motion of the athletic fighters. This sealstone anticipates developments of the Classical era almost a millennium later.

After the Minoans and Mycenaeans comes a dark age and a comparative dearth of evidence. From around 900 BCE we begin to see a particular style of art emerge on the vase. As the name suggests this style has geometric shapes as the keynote. Scholars can see iconographies within the geometric that relate to the late Mycenaean period. Therefore we don’t have delineations of muscles and depictions of athletes in motion. Nevertheless, we do have the suggestion that forms of sport are still vital in society. For example, depictions of chariots and javelins were possibly linked to the idea of funeral games and the significance of war.

Euonymeia (also known by its medieval name Trachones and by its modern colloquial Ano Kalamaki) is an area in Athens. The Geometric period finds from here are considered some of the best examples of the art-form. Such as the ceremonial krater above, a detail of which shows charioteers, which was used for the burial rite of cremation and placed in an elite tomb.

Next in our chronological categorizations comes the Archaic, spanning 800-479 BCE. This period is key in joining the dots between the geometric style and the classical.

Kouroi sculptures are ubiquitous and scholars don’t really know what they were for. They are huge and tend to be found near temple complexes. For example, the one below stood over 5 m tall on the ‘sacred way’ – a road between Athens and Eleusis. In terms of athleticism and beauty, we can see in the male Kouroi the significance of the posed male nude.

You can learn more about the development of The Ancient Greek Kouros and Kore here.

An intriguing statue from Sparta

Technically falling within the Archaic period is our own example of a female Greek athlete in art (in this article at least). The short tunic is unusual for the ideologies of what a female ancient Greek athlete ought to wear and nods to the fact that Sparta was, perhaps, an unusual Greek city. Her posture suggests either running or dancing. Furthermore, we can note her athletic legs and the sense of motion. The figurine was possibly some kind of decorative attachment to a vessel.

Now, this is the period that will be most familiar to the lovers of art history. This is the time that naturalism develops and we see an idealization of a particular form of the nude. The Classical nude has a phenomenal influence on artists such as Michelangelo. With Classical Greek athletes, we can begin to understand their form of beauty.

The Classical period lasts 500-300 BCE. Fascinatingly, however, many of the surviving Greek sculptures are, in reality, Roman versions. This is because, like us, the Romans loved Greek Art. Luckily, their versions survive, while original Greek bronzes do not.

Doryphoros is arguably one of the most famous statues from the Greco-Roman world. The name means ‘spear-bearer,’ as he would likely have originally held a spear in his hand. Polykleitos (the named sculptor) is called the best sculptor of men, with the primary subjects of his works being male athletes with idealized body proportions. He was so interested in the mathematical proportions that he even wrote an essay explaining them, for which Doryphoros is the alleged illustration. The statue is held up as a naturalistic high-point that achieves a balance between muscular tensions and relaxation. Indeed, the contrapposto (one foot forward) stance is one that you will see time and time again. The original statue is lost but Doryphoros was so loved in the Roman world that many versions were created – that is how it survives for us today.

Just like our spear-bearer, the discus thrower exists today because it was so famous that the Romans have countless versions. The torsion and athletic energy captured, just at the moment the discus may be released has been marveled at for centuries. As with many Classical sculptures the pose is actually quite unnatural and its also a rather inefficient way to throw a discus!

The ‘Hellenistic’ period spans from the death of Alexander the Great (323 BCE) until the end of the Roman conquering of the Greek world, around 146 BCE. Hellenism, more broadly, is the love of Greek culture and ideals. This period in Greek art slightly distances itself from the idealism of the Classical period, and towards an exploration of realism and emotion.

The boxer at rest

The Boxer at Rest, also known as The Terme Boxer and The Boxer of the Quirinal is different from the athletes above. This is because he is a rare original bronze. The weary sitting nude boxer, still wearing his hand-wraps and displaying cuts from a fight, came to light from beneath a metro station in Rome. Like our Farnese Hercules, we can see characteristics of the Hellenistic style, like the top-heavy over-muscled torso and the beard.

To learn more about Ancient Greek Art and see some more athletic bodies, why not read: