The Ancient Greek Kouros and Kore 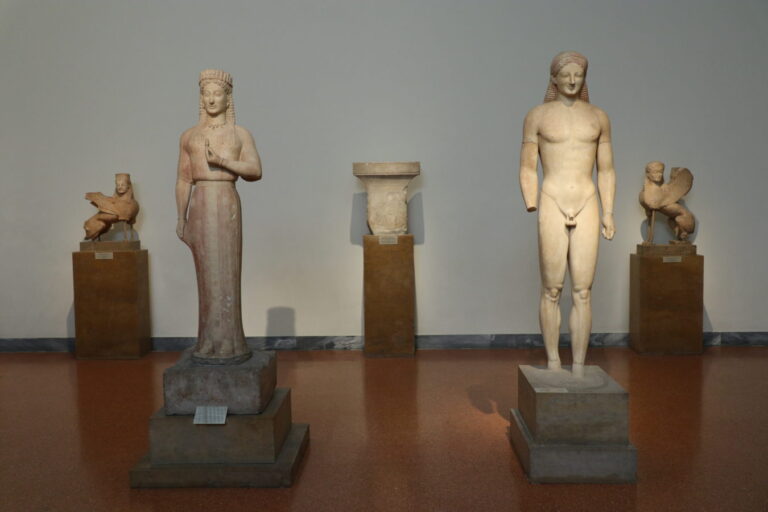 Classical Greek statues depicting male and female bodies are iconic, legendary and set the standards for numerous artists and art movements to come. Preceding the Classical Era, was the Archaic (7th-5th c. BCE) during which statues of young men (Kouros) and women (Kore) were created, and are seen as the first foray of Greek artists into exploring the human form in stone.

The statues of men and women are quite different from the lifelike, naturalistic forms we are familiar with, but the depictions during this time are an important window into the development of Greek art and history.

Archaic Greek statues depicting youths are referred to with modern designated terms: Kouros (Kouroi plural) for the unbearded male youths and Kore (Korai plural) for young maidens. Made of marble or limestone, the statues tend to be life size. Freestanding, forward facing, these figures are youthful, but much more stiff, controlled and unexpressive compared to later Greek sculpture. Idealization was a common theme in Greek art, and we see it starts early in its formation. These ideal males are nude, youthful and athletic. The women are clothed, modest and self-contained. Both sexes are portrayed with the archaic smile – not as a means of emotion, but as a signifier of their transcendence of emotion and rising above the normality of daily life.

One of the earliest examples is the Sounion Kouros. It was created as a temple votive around 600 BCE and found in 1906 at the Sanctuary of Poseidon in Sounion, near Athens. This one is especially huge – standing at 305 cm (10 ft), made of marble from Naxos. Early as this is, it exhibits all the classic characteristics of a Kouros. The boxy shape, stiff stance with one leg forward, long braided hair and slight contours indicating a mouth in peak physical condition. Unlike later Greek sculptures, which emote and exhibit a great deal of movement, these are contained and still.

Almost a hundred years later the Aristodikos Kouros shows the artistic developments and changes that occurred in the century between the two. This was a grave marker and is much closer to lifesize, standing at about 2 meters (6 ft). The Archaic smile, straightforward alignment, foot forward and arms at side may be the same, but the body is clearly much more naturalistic. There is much more realistic musculature and softness of form. This statue represents the transition between Archaic and Classical Greek art.

The clearest influence of this work are the Ancient Egyptian statues. With years of trade between the nations, the influences were unavoidable. Royals and nobles were depicted in these stiff poses created using grid patterns with the intent of idealization and perfection.

Kore appeared about a generation after the Kourous. Excavated from the Acropolis, the Peplos Kore is a beautiful example of an early Kore. Kore are always clothed, in this case she is wearing a peplos, a light fabric garment. The body is boxy and stiff, but there is an attempt to show curvature and form under the clothing. The exact purpose is unknown, but the positioning of the arms suggests she could be a goddess holding a spear or arrow. Like the Kourous, she maintains the ethereal Archaic smile and composed posture. Modesty was highly valued in Greek women. This example is also unique in that it still holds a bit of the original paint.

This recreation shows just how brightly colored and vibrant these figures were.

Though part of the body is missing, the Kore with the eyes of a Sphinx from 500 BCE shows the progression of the depiction of the female form. Maintaining the straight forward pose, she is much more naturalistic, soft and detailed. The handling of the fabric is delicate, intricate and continues to explore this softness of form.

There are numerous debates as to whether these depict actual people, gods/goddesses, were generic creations or perhaps a combination of both. They are excavated out of cemeteries, temples, homes all across Greece. Some appear to be offerings to deities and are clear indicators of economic status, as the materials and works are expensive. The artists/craftsmen who made these works did not sign them, so there is no record of who made these.