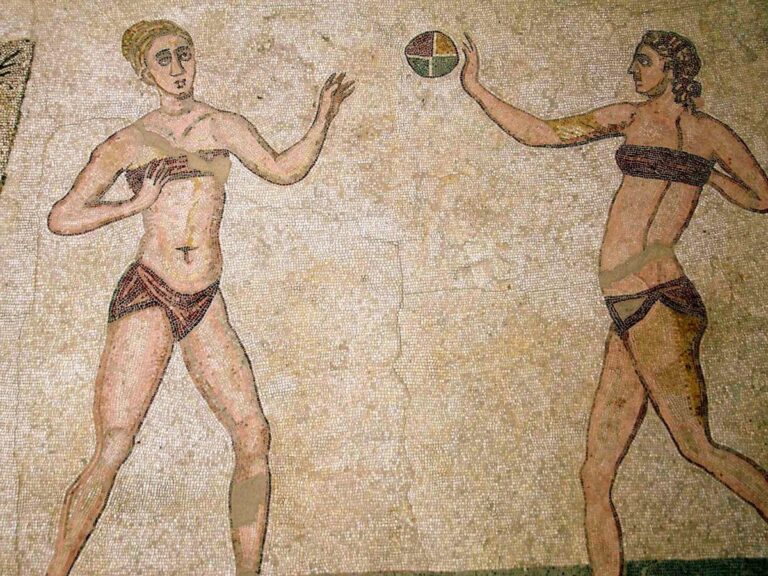 If you have ever wondered when the history of the bikini began, it started exactly at the same time and place in history as philosophy, mathematics, and art: with the ancient! The Roman mosaics found in Sicily prove that women had been active and fit long before “training with Jane Fonda” or cheerleading were invented. Today’s trend of being fit is nothing else as yet another fashion, and as we all know, trends do come back, however slightly changed. What has changed since the ancient bikini girls?

The mosaic christened as ‘ancient bikini girls’, was found by an archeological excavation of the ancient Roman villa near Piazza Armerina in Sicily. It may have been made in the 4th century CE by North African artists, since some of the tesserae (the pieces of the mosaic) come from Africa. It clearly shows the athletic activities that women could participate in. Additionally, it also shows what kind of rewards they received for the best performance: a palm of victory and a crown.

Just look closer at these fantastic women! Their exercises are no different from ours! Running, playing with a ball or lifting hand-weights. Their slim and firm bodies seem to be taken straight from our health and sport magazines. Curiously, the depictions might have possibly been idealized, which shows what the ideal of beauty was like back then. That is to say, well-muscled legs and arms, broad hips, and small feet. And, obviously, jewelry and hairdos!

The precursor of bikini was a band called strophium (or fascia, fasciola, taenia, and mamillare). It was probably a long piece of cotton or linen cloth wrapped around the breasts to hold them or even compress them. It was a typical item in female underwear. The bottom, however, was not a normal element of underwear of the Roman citizen. Called a subligar, it was worn by athletes or slaves.