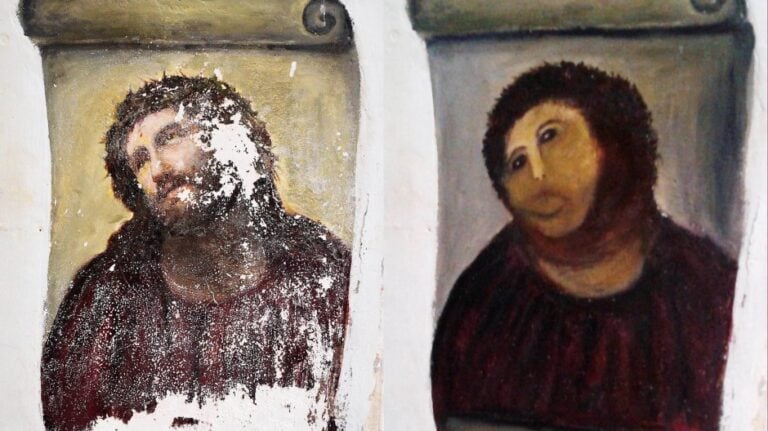 Restoration of “Last Supper” You Had No Idea Existed

Artworks are a legacy of humanity and as such, they must be well preserved – and they usually are, thanks to museums and cultural institutions. Even so, sometimes the conditions of the place where the work is, or the material used, are implacable enemies of the durability of a work, which leads to the need for restoration. The restorers, who are generally artists, take care that the work can be renewed without interfering with the aesthetic character of the piece. But this does not always work. Today I present a list of five of the world’s worst artwork restorations.

1. Maggie Simpson, is that you?

We are in the Church of Sainte-Anne des Pins in Canada. In front of the church, there is a statue of the Virgin Mary holding Maggie Simpson. Oops! I meant baby Jesus. It all started when the figure was vandalized and the baby lost its head. Local artist Heather Wise graciously offered to repair the work and spent several hours carving the clay on a stone statue. The result? Well, it certainly pleased Matt Groening … The faithful, on the other hand, were a little disappointed. Fortunately, the repercussions of the bizarre restoration was so great that the original head was eventually found and returned. A happy ending, after all!

In Catholicism, Santa Bárbara is the patron saint of miners and all those who work with fire. However, she couldn’t go through her restoration unscathed. The image in question is a 1.73 m sculpture that stands on the main altar of a church in Brazil. It was restored in 2011 for the Santa Barbara Day festivities. Although it shocked most people, those responsible for the restoration, who worked on it for six months, defended themselves against criticism, stating that the result is actually very similar to what the sculpture looked like originally. The image, however, now seems to have used foundation, mascara, lipstick, and has surrendered to the plucking of eyebrows…

3. When the mosaic becomes a meme

In 2015, a mosaic in the Hatay Museum fell victim to a disastrous restoration, which newspapers presented as a “grotesque restoration”. In fact, if you pay close attention to the before-after image, you will see that the representation now approaches internet memes. The restoration was suspended and the Turkish government opened an investigation into the work.

Details of the Sistine Chapel, Michelangelo’s masterpiece, have also been restored. Thanks to this work, Jesse became blind. This happened because the restorers removed the dirt accumulated on the frescoes to eventually reach its deeper layers, which altered the repairs that Michelangelo himself had made. The work has generated controversy, many found it incredible, but other experts disagreed. According to them, it would be strange to suppose that the artist had painted his characters without eyes.

In the first decade of the 20th century, the Spanish painter and professor Elías García Martinez produced the artwork Ecce Homo, in which he represents Jesus with a crown of thorns. The work is a fresco that stands in the Sanctuary of Mercy of Borja, Spain. No one had ever paid much attention to the work until 2012, when a parishioner Cecilia Gimenez, at the time aged 82, decided to restore the work. The result was disastrous. After this episode, the town of a few inhabitants and the restorer became famous. After all, the work has become a meme, lovingly dubbed Ecce Meme.

Despite these disastrous works, it is worth saying that they are an exception rather than a rule, and we owe restorers many of the works of art we know today.