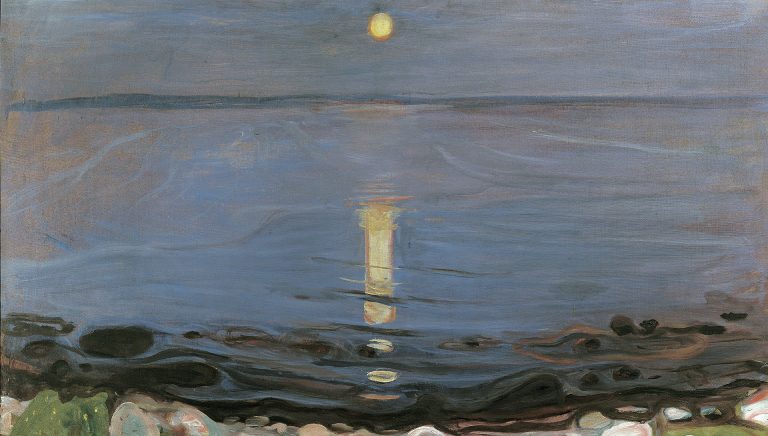 Edvard Munch was fascinated by the Norwegian summer light which evokes both tranquillity and anxiety, two feelings that Munch tried to capture in his work. Moving almost every summer to a nearby coastal town, he often worked between 9 and 11 pm in order to precisely capture the unique atmosphere of the summer nights.

In his journals, Munch wrote that seaside rocks reminded him of goblins and sea spirits: “In the night’s light which forms have fantastic tones”. Sadly, the critics didn’t understand Munch’s poetic approach to painting and read his works way too literally. As a result, the reception of his 1890s works was hostile and cruel, some calling his paintings “gibberish”. They criticized the “easily thrown stones that seem to be made only from soft, shapeless substance.”

There are two theories about the woman depicted in The Voice / Summer Night. The first one claims that it was Munch’s first love, Millie Thaulow, whom he met a year before. She was older and married to a military captain. However, as Munch painted the first version of this work back in 1893, the second theory proposes a different interpretation. Maybe it is better to consider the female figure more metaphorically as a symbol of the voice, as the title suggests.

Inger was Munch’s younger sister and she often modeled for his paintings. In the year when this portrait was created, Munch rented a small house in Åsgårdstrand, which was a tiny village situated on the edge of a fjordplace near Oslo, which he had regularly visited since 1888. It served as a summer resort for many intellectuals and artists coming from the city.

Although Munch continued to be considered rather controversial in Norway, France and Germany warmly welcomed his work. Between 1902 and 1904, Munch exhibited at the Parisian Salon des Indépendants.

The summer of 1915 was different from the others, Munch didn’t spend it in his usual village but he worked in Hvitsten on the decorations of the University’s auditorium. In August and September, he traveled to Trondheim, Jeløya and Copenhagen. Moreover, in 1915 he sent financial support to young German artists.