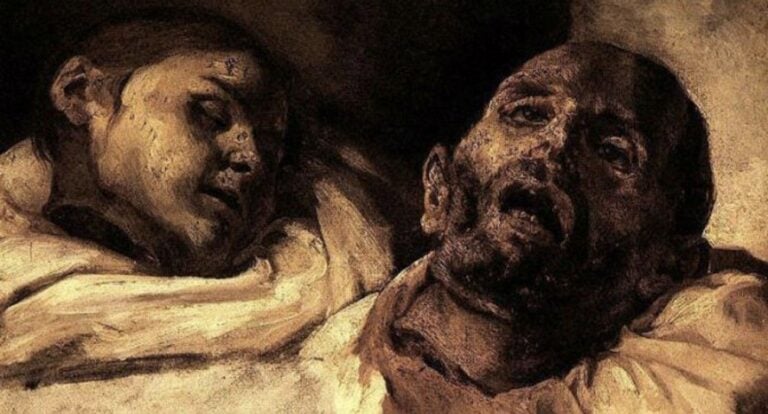 Paintings can represent both real and unreal themes and scary paintings are a mixture of both. Among all the emotions that make up the human psyche, fear is the most genuine evidence of man’s nature. Love corresponds to an advanced state of evolutionary development and the neural connections associated with sexual reproduction. However, fear creeps into the present through traces of a more primitive past.

The goal of fear has transformed over time. Fear of medieval witches or of God’s punishment does not correspond to present-day reality. In fact, the contemporary definition of fear fits with the most human existential anguish, which has gone from a philosophical problem to an unquestionable reality.

We associate fear with violence. It is an indivisible feature of nature and at the same time, of death. Hence violence is a creative act as powerful as love. But, when it is united with fear, the result is paralyzing. When fear overtakes him, man is reduced to his most vital appearance, naked of all that he acquires through movement.

These are ten paintings that bring to the canvas the relationship between violence and terror that reduces man to the minimum:

The set of fourteen scenes known as Black Paintings that decorated the Quinta del Sordo provide us with the bloodiest and most disturbing art. Quinta del Sordo was the country house on the outskirts of Madrid where Goya lived his last years in Spain. The painting above depicts Cronus, or Saturn in Roman mythology. He has taken one of the newborn children of Rhea, his wife, for fear of being dethroned by one of them. It is believed that Goya was impelled to paint this horrifying work by both a fear of being devoured by the absolutist terror that followed the Trienio Liberal and by the fall and execution of Riego.

Beheaded in a crypt

This painting is also known as The Bell of Huesca. The artist, José Casado, painted this canvas during a stay in Rome. It is one of the most truculent paintings in the collection of the Prado. The scene depicts the bloody episode in which Ramiro II the Monk, king of Aragon from 1134 to 1157, shows the nobles the head of Bishop Pedro de Lucria hanging from a rope like a clapper. Pedro had instigated a revolt and the 12 leaders shown to the upper right had rebelled against Ramiro’s authority. In reality, the Hall of the Bell, where the legend places these facts, is in a crypt of the palace of the Kings of Aragon. It is now the home of the Museum of Huesca.

Rarely has a canvas shown the terror that death instills. Here we see a barren landscape in which scenes of destruction are happening. An army of skeletons, commanded by death on the back of a starving horse, gives itself up to a throat-cutting worthy of George A. Romero.

A barbarian king, two sisters, a rape, a bloody revenge. This is what the tragic story of Philomela is about. It is one of the least known myths of Ovid’s Metamorphoses. Tereo, husband of her sister Procne, rapes her and cuts out her tongue. However, he can’t stop Filomena from telling about the barbaric act, nor the revenge of both. In this canvas Rubens shows us the scary moment when Procne throws the tyrant’s bloody head at Itis. All this, after having served him his son for dinner.

Bouguereau used a passage from Dante Alighieri’s masterpiece as inspiration to create a work as realistic as it is raw in its content. As Dante and Virgil pass through the eighth circle of hell, they encounter two men fighting fiercely. One man is on his knees. At the same time, he receives the punishment of another who sticks his knee into his back and bites his neck in fury.

Ken Currie, the Scottish painter, was obsessed with morbid faces and the effects of illness, old age and the passage of time on bodies. Here he has produced one of the most enigmatic self-portraits ever painted. A whitish face contrasts with the dark background. The lower part appears stained red and the nose severely battered. However, it is the deep black eyes that are the most terrifying detail of the work.

It was during his most acute period of pictorial experimentation that Redon placed himself in the opposite position to his post-impressionist counterparts. At one stage he went through a black period. It was then that he captured elements that demonstrate the sinister nature of humanity in contrasts that were unusual for his time. The Smiling Spider is part of his obsession with black. In fact, Redon believed that “there is no more beautiful color in the palette”.

Inspiration from a morgue

Here we see pain and death that includes severed parts of the human anatomy. The artist used to go to a psychiatrist’s asylum and to the morgue to take inspiration for the works. Adding to that darkness, we learn that he painted them at night.

Caravaggio captured the famous monster in Greek mythology. Eight years later, Rubens immortalized Medusa in his own interpretation. Significantly, we see the moment when Perseus beheaded her and fell to the ground, and the vermin jumped in all directions.

A redheaded boy with a scary smile. A strange combination somewhere between the scary Joker and the Mona Lisa. He is looking at passers-by and holding a sheet of paper with a mixture of pride and shyness.

The development of art based on horror has an important seat or origin in the painting that developed in the Middle Ages. At that time religious paintings used the figure of the devil and hell as a means of generating fear and creating taboos. They did this to prevent behaviors rejected by the morality of the time. From that time on, some artists made an effort to capture diabolic forms in their portraits and sculptures. In fact, their work was conceived precisely with the idea of generating horror in the observer. Over time, however, artists appropriated these forms to demonstrate that the grotesque, the violent and the unsightly can also give rise to works that are sublime and beautiful. And in addition, they could be suggestive in the eyes of the viewer.

I hope you have found as much beauty in horror as I have with these scary paintings.

Are you ready to journey into the fascinating world of anatomical art? Read on, as we reveal flesh and blood art through the...