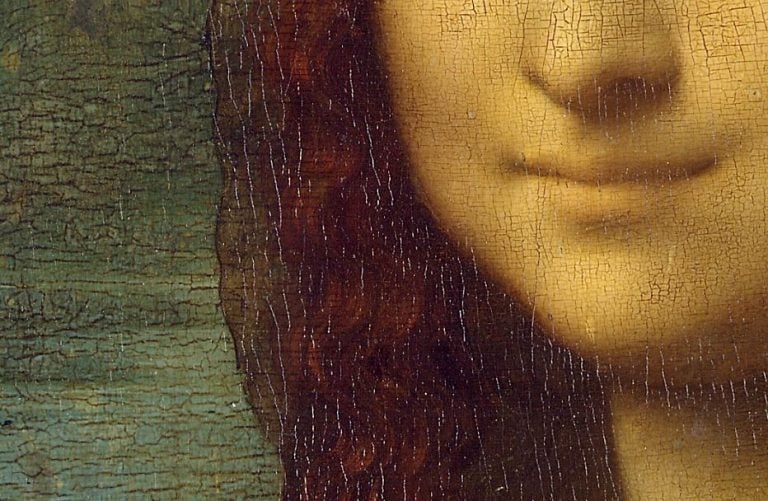 The Art of Being Sick

Everyone has heard about the Mona Lisa, Leonardo da Vinci’s masterpiece at the Louvre in Paris. But you have probably never heard about… her illnesses! Doctors sometimes try to make a medical diagnosis of the main characters of artworks. Within the numerous oeuvres medically interpreted, there is none comparable to the Mona Lisa.

The enigmatic woman has actually raised interest through the centuries for a number of reasons, like the composition and the background, the excellent technique of Leonardo (the “sfumato”), and the identity of the woman herself. Although still debated, she has now been identified as Lisa Maria Gherardini (1479–probably 1542), wife of silk merchant Francesco del Giocondo (1465–1542) of Florence.

At the time, an important woman was called “Monna,” an abbreviation of Madonna and contraction of  “mia donna.” This means “my lady” – from here, the name Monna Lisa in Italian and Mona Lisa throughout the world (probably for a question of simplifying the pronunciation). The husband’s name was the origin of the other name for the masterpiece: La Gioconda or Joconde, respectively in Italy and France.

Some notes scribbled in Leonardo’s book in 1503 confirm that Lisa Gherardini was indeed the model for the portrait. The year 1503 was especially important because it was the year in which the portrait was started. The reason for the commission was likely the celebration of the birth of the couple’s third son.

However, there is another reason for interest in the Mona Lisa, the one we are going to explore now. The medical interpretations of this masterpiece have entertained doctors for decades.

Mona Lisa’s enigmatic smile is probably one of the most studied and analyzed features in the history of art. Some different medical groups interpreted it as a facial muscle contraction, which develops after a facial paralysis or Bell’s palsy.

Bell’s palsy is an illness caused by an inflammation of the 7th cranial nerve, one of the facial nerves, which innervates most of the muscles responsible for mimicry. We have two facial nerves, one for the right and one for the left. When one facial nerve is involved in Bell’s palsy, half of the face cannot be properly moved. In the majority of cases, the disease resolves almost spontaneously, with a regeneration of the nerve. However, the facial expression doesn’t generally return to baseline because the regeneration is imperfect. This may cause unnatural contemporary contractions of different muscles. The “sfumato” could be an attempt to reproduce these post-illness characteristics.

The most intriguing part is that Bell’s palsy is more likely to develop in the bodies of pregnant women than non-pregnant women. As said, Lisa Gherardini could have given birth to her third son just before posing. For this reason, when occurring in pregnant women, the medical literature began to refer to facial palsy as Mona Lisa syndrome.

A less poetical explanation for the smile is a loss of front teeth. Under the inferior lip, a scar is visible, possibly due to a trauma that resulted in the loss of teeth. This would explain why she is smiling with a closed mouth, hiding the teeth. In a weird way, some even postulated that this is the smile of a deaf person, or alcoholic person, or of those suffering from asthma, respiratory troubles or bruxism.

The skin of the Mona Lisa is unequivocally yellowish. Some recent studies with infrared photography revealed that this feature was part of the painting from the beginning. Moreover, an irregular yellowish lesion at the corner of the upper left eyelid can be noted. This could be a xanthelasma: a sharply demarcated yellowish accumulation of cholesterol underneath the skin, typically present on or around eyelids.

Her hair is thin and the black veil on her head does not hide a large forehead with a receding hairline. Moreover, a complete lack of eyebrows and eyelashes is evident.

A careful observation of the neck insinuates a diffuse enlargement, while the dorsal surface of the right hand seems to be somewhat swelled.

Back in 1959, a new pregnancy and its hormonal changes were found as an explanation of Mona Lisa’s details. So, at that time, doctors believed Mona Lisa to be in normal condition.

In more recent years, the evidence of the xanthelasma, the yellow skin, and the swelling of the hand interpreted as a lipoma (a benign abnormal accumulation of fat tissue) suggested the possibility of hyperlipidemia: excess of fat molecules. It could increase the risk of heart attacks and deaths, and, in familiar cases, this appears to occur at a younger age. Some doctors also found evidence of Mona Lisa’s death at 37 (in 1516). All these clues completed the puzzle and the diagnosis of hyperlipidemia seemed probable.

Just two years ago, other experts made a different and more comprehensive diagnosis. They thought that Lisa Gherardini could have suffered hypothyroidism, an illness in which the thyroid gland works less efficiently. Hypothyroidism can cause yellowish discoloration of the skin, thinned hair, and loss of eyebrows and eyelashes. The puffy neck might be a goiter: the thyroid gland enlarges trying to produce more hormones, despite its dysfunction.

People with hypothyroidism usually suffer from the cold and our main character holds a blanket. In advanced states, hypothyroidism may also produce secondary hyperlipidemia, which would explain both the xanthelasma and lipoma. A successive report went even deeper, suggesting that glandular dysfunction and its consequences may come from postpartum thyroiditis. In other words, an inflammation of the thyroid-related to pregnancy.

Scleroderma is a rare rheumatological pathology whose characteristics are thickening and hardening of the skin, which often impedes facial mimicry. In scleroderma, which more commonly affects women, hair and eyebrows often disappear. Therefore, could Lisa’s hair actually be… A wig?

Or, maybe the problem with Mona Lisa is the Gilles de la Tourette syndrome. This may cause tics, like a persistent contraction of the muscles around the mouth or incontrollable trichotillomania (a mental disorder in which the patient feels an urge to pull out his/her own hairs).

An even rarer hypothesis concerns a hereditary illness of different organs, including skin: Ehlers-Danlos syndrome. The “Madonna facies” is part of the traditional descriptions of this disease and seems to be present in our painting. The skin is pale, thinned, flexible, stretches easily, and does not fold easily during mimicry. The face has a sort of immobile aspect, accentuated by frequent pains and jaw subluxation.

Bruxism, already mentioned, can be present. Moreover, problems in coordination and harmonization of eye movements may be manifest. Mona Lisa herself expresses an imperfect convergence of the eyes and the direction of her gaze does not correspond to the orientation of the head. Alterations of the hair and nails are also frequent in this pathology and hypothyroidism is not so uncommon.

Even more… and Rarer Possibilities

Other doctors tried to relate Lisa Gherardini’s hyperlipidemia to a very particular liver problem, called Primary Biliary Cholangitis and attempted to find a connection between her hypothesized thyroid troubles with other liver alterations – all causing a yellow discoloration of the skin.

Ophthalmologists concentrated on the eyes, diagnosing an infrequent inflammatory disease called Fuchs’ Heterochromic Iridocyclitis. On the other hand, neurologists tried to explain the position of the arms, with one hand trying to hold the other arm, in an effort to hide a tremor from Parkinson’s disease.

Nothing Certain but Charm

At the end of this exploration, the conclusion can be only one: Mona Lisa could have suffered from so many illnesses… or from no illness at all. But in this sea of uncertainty, everyone agrees: the most famous painting of Leonardo continues to fascinate us from so many points of view!

Dahan, Shani and Yehuda Shoenfeld, “A Picture is Worth a Thousand Words: Art and Medicine,” Israel Medical Association Journal 2017(12): 772-776.

Rousset, L,  C. Bernardeschi and B. Halioua, “Did Mona Lisa suffer from postpartum thyroiditis?” Journal of the European Academy of Dermatology and Venereology 2019 33(5): 225-226.