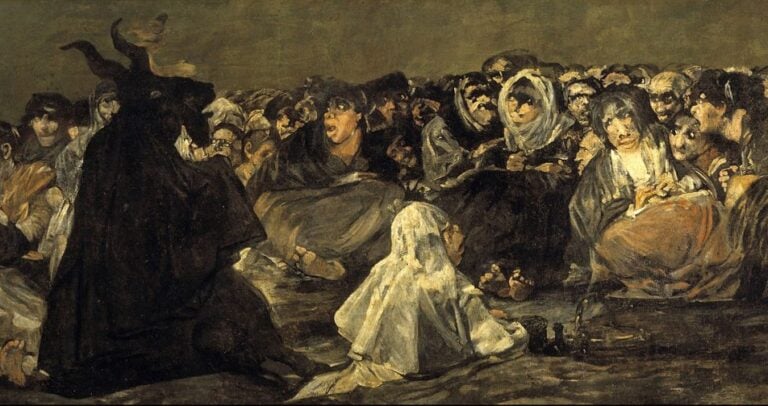 There are already several articles that treat in detail the life and works of Francisco Goya. If you want to learn about his career or most famous works, look them up in our magazine because here we’ll dig for Goya’s darkest secrets, once hidden in the Deaf Man’s House. Goya’s Pinturas Negras are ones of the darkest artworks in the history of art.

The series of 14 murals was painted in the last years of Goya’s life. Aged 72, he moved outside of Madrid to a house once inhabited by a deaf man. Hence the name, but it was well-fitting also for Goya who was nearly deaf after a fever he had suffered 26 years earlier. The murals were executed with oils directly onto the walls of the dining and sitting rooms, intended only for private use as there is no documentation that they were commissioned. The old painter most probably never intended for them to be public, as he imbued them with his greatest fears, delusions and indignations.

All the monsters from his soul found their reflections in the dark colours and eerie themes, as if the painting of Pinturas Negras (black paintings) was a sort of an auto-therapy.

What could have pushed Goya to execute these grim murals? A combination of ever-deteriorating health and first-hand experiences of war, state terror, violence and of course the conflict with the Inquisition. The amounts of fear, panic and suffering that Goya experienced exceeded the limits of the bearable. The only way to let his suffering out was to paint the bizarre worlds able to contain these quantities of pain.

Goya never wrote or told anyone the titles for the series. The names you see and find in scholarship on Pinturas Negras have been provided by art historians. The lack of titles, however, leaves us more room for creating our own interpretations, giving the paintings themselves infinite symbolic meaning. The chromatic palette of all the works is extremely reduced, with the dominance of brown, grey and black with touches of lighter tints for contrasts.

The lack of balance recurring in all the compositions confirms Goya’s innovative and very progressive style, heralding the 20th century’s Expressionism. The figures appear off-center, suspended, weirdly cut-off by the frames or even buried in the ground, like the dog above. The compositional aspects combined with the pessimistic colours create an atmosphere of uncertainty, ethereality, eeriness. Imagine entering Goya’s rooms- it must have been both scary and fascinating at the same time, in other words: awesome in the dated meaning of the word, simultaneously inspiring wonder and terror.

In 1823 Goya departed for Bordeaux, escaping the possible repressions coming after the fall of the government and the house was inherited by his grandson and later sold to a French banker Baron Émile d’Erlanger. What happened to the murals? They became famous of course and in the 1870s the idea of removing them from the house popped up. Baron d’Erlanger wanted to sell them at the Paris World’s Fair in 1878 and the slow transferring of works onto canvases began in 1874. Interestingly, the first inventory written on the house when the murals were still in situ mentions one more painting present in the house. There is no trace of such nowadays. Well, Goya still keeps secrets for us.

Goya’s Pinturas Negras are to see in the Prado Museum in Madrid or here.