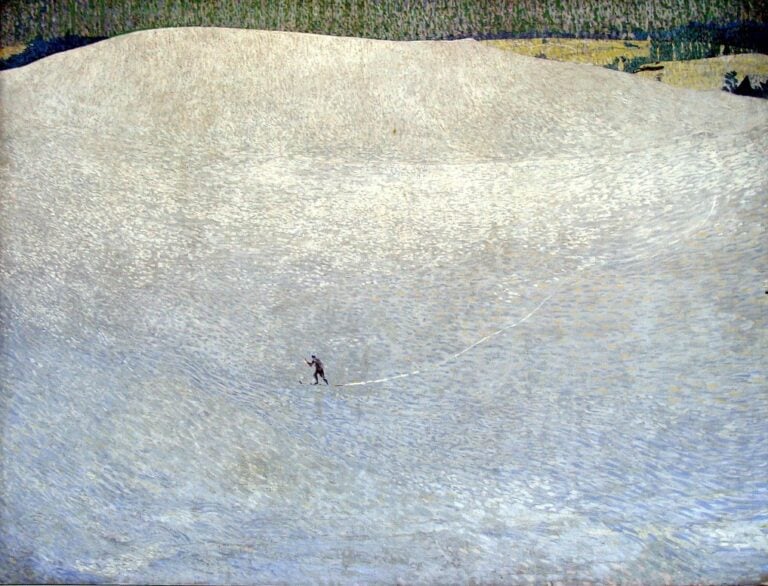 These are the shortest days of the year in the Northern Hemisphere. It’s dark and cold outside, but there are two things which brighten the night – Christmas lights and snow, and this week’s masterpiece is all about snow (and a lot of it!). This is Cuno Amiet’s Snowy Landscape, also known as Deep Winter.

When looking at the picture above, it’s hard to imagine the real size of it. I would guess it fits a rather small frame that one could hang over a desk, next to some other intimate landscapes. In reality, however, it’s painted on a huge canvas measuring more than four square meters! Kept in the Musée d’Orsay in Paris, the painting is nothing else than four meters square of mesmerizing snow. This at first may seem a risky concept, especially for 1904, which was before the advent of the 20th-century abstraction.

But it works surprisingly well – the wide bright surface dazzles with subtle shades of whites, blues and greys. Small daubs of colors merge into a hypnotizing, almost abstract image. However, the lone skier placed in the center of the composition reminds the viewer that they are looking at a snowy landscape.

The tiny figure not only plays the main role in the composition, but he also builds up its wintery, melancholic mood. A lonely human being surrounded by an overwhelming mountainous scenery is an iconographical concept originating in Romanticism. This makes this painting not just a wintery landscape, but a work about journey, both literary as a skiing trip and symbolically as a journey through life.

To complete the composition, Amiet placed a color contrast in the upper part of the painting. Here we see a narrow view of what is beyond the glacier: trees and a shepherd’s hut. This suggests that there is something beyond the great white surface. The viewer is left with questions: who is the skier and where is he going? Will he come back?

Cuno Amiet (1868-1961) was a Swiss painter born in Solothurn, a small and charming town in the heart of the Swiss Alps. Like in the case of Paul Klee, the monumental Alpine landscapes shaped the sensibility of the artist whose oeuvre embraces many wintery scenes, gardens, and fruit harvests.