6 Things You Must Know About Scrovegni Chapel 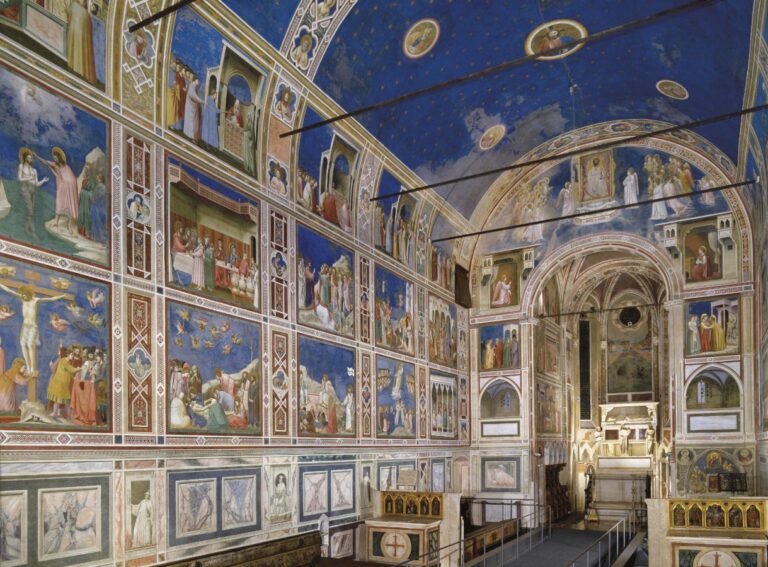 Scrovegni Chapel in Padua is one of the most famous Proto-Renaissance masterpieces. Decorated by Giotto di Bondone was completed in 1305 for the Enrico Scrovegni family. The frescoes adorning the walls and ceiling of the chapel relate a complex, emotional narrative on the lives of Mary and Jesus. It’s an absolute Mecca for everyone interested in art, especially in Renaissance.

Here are 6 things you should know about the Scrovegni Chapel:

1. It’s the pearl of Proto-Renaissance

Proto-Renaissance or the Pre-Renaissance period (c.1300-1400) pioneered the new form of figurative “realism”, which was fully developed by artists during the era of Renaissance art proper. Giotto’s groundbreaking art did not however, represent the European or even the Italian mainstream. In the rest of Europe and Italy flat and unrealistic representations were in reign – as well as golden backgrounds and donors figures much smaller than the figures of saints.

2. It is a masterpiece of storytelling

Giotto’s fresco cycle focuses on the life of the Virgin Mary and celebrates her role in human salvation. The genius of the Chapel lies in the narrative’s layout: Giotto arranged the different scenes chronologically, in horizontal bands. Mary’s life appears first, followed by the life and ministry of Jesus, and finally culminating in scenes depicting the Passion. However, when the bands are read vertically, viewers will be struck to realize that each scene foreshadows the next. On the wall opposite the altar is the grandiose Universal Judgement, which concludes the story of human salvation.

3.  And it is full of theology

Giotto painted the chapel’s inner surface following a comprehensive iconographic and decorative project. Among the sources utilized by Giotto following Friar Alberto’s advice are the Apocryphal Gospels of Pseudo-Matthew and Nicodemus, the Golden Legend (Legenda aurea) by Jacopo da Varazze (Jacobus a Varagine) and, for a few minute iconographic details, Pseudo-Bonaventure’s Meditations on the Life of Jesus Christ, as well as a number of Augustinian texts, such as De doctrina Christiana, De libero arbitrio, De Genesi contra Manicheos, De quantitate animae, and other texts from the Medieval Christian tradition, among which is the Phisiologus.

4. The Scrovegni Chapel is also known as Arena Chapel

The church was dedicated to Santa Maria della Carità at the Feast of the Annunciation, 1303, and consecrated in 1305. The chapel is also known as the Arena Chapel because it was built on land purchased by Enrico Scrovegni that abutted the site of a Roman arena. The space was where an open-air procession and sacred representation of the Annunciation to the Virgin had been played out for a generation before the chapel was built.

5. The Chapel was commissioned by a wealthy banker (of course)

Enrico Scrovegni was a Paduan money-lender who lived around the time of Giotto and Dante. Enrico is most famous as the patron of Giotto, commissioning the great painter to paint the famous Scrovegni Chapel, c.1303-5, which he also commissioned. There is a tradition that he hired Giotto to atone for the sin of usury – Dante placed his father in the Seventh Circle of Hell for his notoriously ill-gotten gains, and Enrico himself was a moneylender on a grand scale. In 1320 Enrico Scrovegni fled the wars and civil strife that plagued Padua at the time, and settled in Venice. He was formally banished from Padua in 1328, and died in Venice in 1336.

As a tribute to the Scrovegni family, in the Last Judgment fresco, Enrico Scrovegni himself is depicted presenting a model of the chapel to Mary.

6. More that 40 people helped Giotto to paint it

Giotto, who was born around 1267, was 36–38 years old when he worked at Enrico Scrovegni’s chapel. He had a team of about 40 collaborators, and they calculated that 625 work days were necessary to paint the chapel. A “work day” meant that portion of each fresco that could be painted before the plaster dried and was no longer “fresh” (fresco in Italian ).