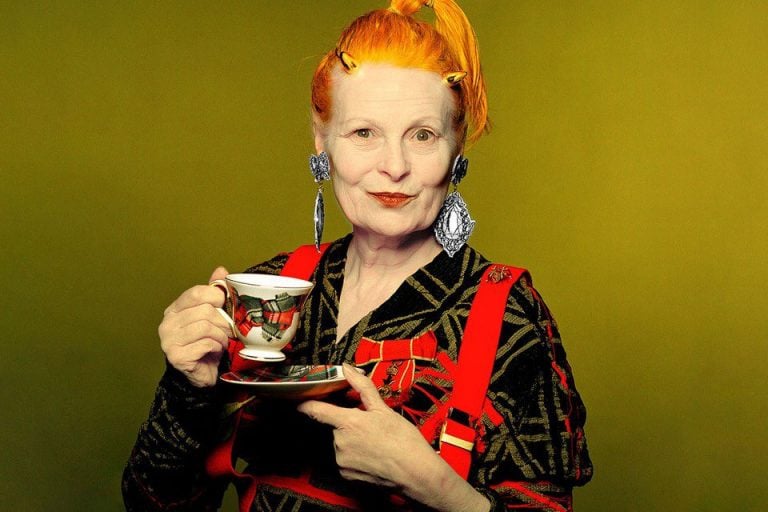 Vivienne Westwood was born in 1941, in a village in Derbyshire, England. Her parents were factory workers and cotton weavers. When she was a teenager, she moved to London with her family, where she trained as a primary school teacher. In 1962, she got married. However, that marriage ended when she met Malcolm McLaren, the manager of the Sex Pistols (among many other things). McLaren was the one who helped her decompress her restlessness into creativity.

Punk Before It Was Mainstream

Two years later, 430 King’s Road became Seditionaries: Clothes for Heroes. It followed the same eccentric style of SEX. The clothes resembled motorcycle gear and fetish wear. There were also t-shirts and muslin tops with controversial logos and prints, such as swastikas, naked breasts, pornographic cowboys, etc. Sex Pistols actually wore many of these t-shirts during the years 1975-1978.

From Punk to Historical Costume

Punk culture quickly became mainstream. Westwood went through an artistic crisis but she soon obtained a new interest in high fashion. Nevertheless, she didn’t lose her eccentricity and distinctiveness. Her first collection to go to the runway was Pirate (AW ’81). It was a collection celebrating romantic elements of the past, such as buccaneers, corsairs, dandies, etc. Westwood was influenced by the portrait paintings of the 17th and 18th centuries for this collection. Her new turn quickly became known as the “New Romantic”. The style became popular through various musical acts.

Westwood’s collections were less and less under the guidance of McLaren. In Buffalo Girls/Nostalgia for Mud (AW ’82), she showcased her interest in historical costume with references to traditional South and North American cultures. For example, she created “polleras,” that is full pleated skirts, and small bowler hats worn by Aymara women of the Central Andes, in South America. They were also known as cholas or cholitas.

The End of the McLaren Era

In 1982, she launched the Punkature collection. This was when she split up with McLaren and finally saw herself as a designer for the very first time. She wasn’t an interpreter of his vision anymore. The last collection they did together was Witches (AW ’83). The inspiration behind it was Haitian voodoo. Actually, it celebrated Keith Haring’s art.

Back to the Past

Throughout the 1980s and the 1990s, Vivienne Westwood drew inspiration from various historical periods. In Mini-Crini (SS ’85), she shifted towards more fitted, tailored garments and also reworked historical dresses. However, nothing lost its cheeky and sexual character. In Time Machine (AW ’88), she revamped traditional English tailoring. For instance, she worked on the Norfolk suit, which was a belted jacket worn with knee-breeches.

For SS ’91, she created the Cut, Slash, and Pull collection. Her main inspiration for this was the Tudors’ portraits and her studies of 16th-century clothing. She was interested particularly in the cuts and pricks of the fabrics that revealed underlying garments. Yet, what Westwood revealed was bare skin.

But Is It Wearable?

Many judged her designs as uncommercial and too theatrical. However, that did not discourage Westwood. She had already gained the approval of the fashion industry. Her ideas were quickly becoming mainstream and she made money from her London shops and international sales.

During the 1990s, she continued working on historical concepts. In Anglomania (AW ’93), she worked on clan tartans. The following year, in Café Society, she showed cushion bustles. In 1996, Westwood created a collection titled Les femmes ne connaissant pas toute leur coquetterie (Women don’t know their elegance at all). She drew her inspiration from the French Rococo painter, Jean-Antoine Watteau.

Vivienne Westwood in the Millennium

The new millennium found Vivienne Westwood very popular as a brand and with many fashion lines. Moreover, she has inspired many museum retrospectives. At the same time, she hasn’t stopped producing her regular, “New Romantic,” edgy collections. Last but not least, she became a Dame in 2006.

The famous designer was also known for her activism. She often did campaigns with various important organizations about environmental issues and climate change, civil liberties and human rights, nuclear disarmament, etc. She was a big supporter of the Green Party of England and Wales. Her political engagements were about terrorism, democracy, and propaganda. Actually, she has even written a manifesto, Active Resistance to Propaganda.