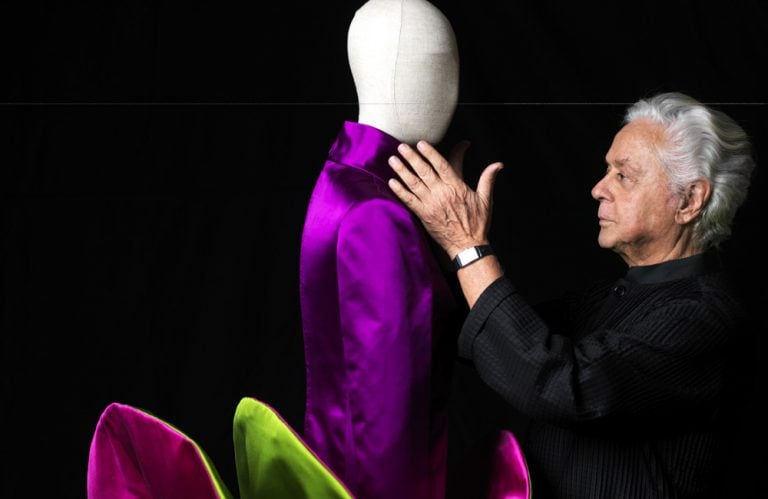 Roberto Capucci (b. 1930) is an Italian fashion designer. Or maybe he’s a sculptor. It’s difficult to be sure. Capucci’s sculpture dresses make it seem that he’s a bit of both.

Roberto Capucci is one of the most important designers in post-war Italy. He opened his first salon in 1950, when he was only 20 years old, and achieved international success very quickly. Jacqueline Kennedy and Marilyn Monroe were among the celebrities who wore his dresses. His Nine Dresses dress were featured famously in a 1950s Cadillac ad.

As Nine Dresses shows, his works have been highly sculptural since the beginning. They’re highly three-dimensional even when no one is wearing them. Many are based on an unusual, box-shaped silhouette. His works are highly geometric, and they have also been compared to origami.

In the 1970s, however, he started to truly make sculptures out of fabric. One of the first sculpture dresses, called Colonna (1978), was based on a Doric column. He continues in this vein today. Capucci’s sculpture dresses aren’t based on practicality, he says, and they aren’t related to current trends, either. He views his work first and foremost as a means of expressing himself. He’s very upfront about the fact that his dresses aren’t meant for every day, but he’s also adamant that they are wearable. He says that some of his more recent work wasn’t designed with practicality in mind, but “with a few corrections they can be made wearable.”

While he doesn’t seem keen to give a definitive answer to the artist versus fashion designer question, in many ways Capucci works like a sculptor. Instead of participating in big fashion events like Fashion Week, which he used to do, he now shows his sculpture dresses in settings completely of his own choosing. He has exhibited at the Venice Biennale, and he’s had solo exhibitions at the Philadelphia Museum of Art and in several Italian cities. Capucci’s sculpture dresses also appeared in the Metropolitan Museum of Art’s 2018 blockbuster Heavenly Bodies: Fashion and the Catholic Imagination. He also has his own museum, the Roberto Capucci Foundation, in Florence, Italy.

Regardless of whether you consider Capucci’s sculpture dresses to be sculpture or fashion, they’re clearly incredible works of art. Capucci is very inspired by nature. He incorporates natural motifs, and sometimes actual pieces of nature, into many of his works. He’s been known to use some pretty unorthodox materials in his creations, including plastic and stones. He uses many bright colors and has clearly been influenced by many different modernist movements, including Italian Futurism.

Capucci has been credited with inspiring many later designers. Given how spectacular his work is, both as art and as fashion, it’s easy to see why. You can see more of Capucci’s creations at any of the links below.