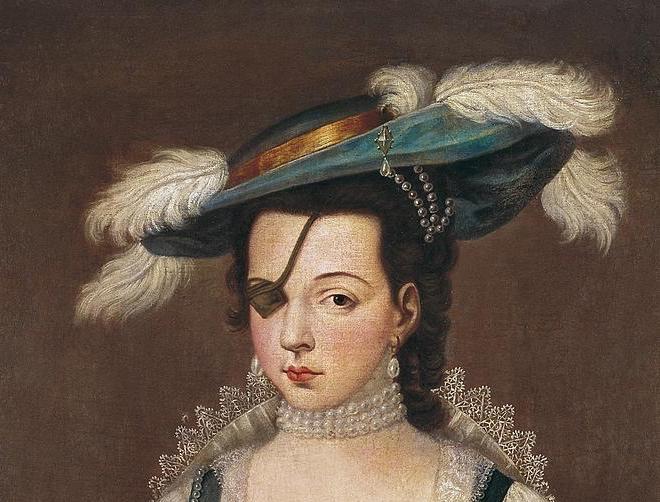 “Who is this beauty with an eyepatch?” you may ask. Is she some sort of pirate queen? No, but you are not far from the truth. Ana de Mendoza de la Cerda y de Silva Cifuentes, Princess of Eboli, Duchess of Pastrana (1540-1592) was a Spanish aristocrat. She was strong-willed enough that given the opportunity she would be able to lead a band of pirates without any problem. That however was not her fate, but her life was full of dramatic turns reflecting her independent personality.

How it all started

Ana, the future Princess of Eboli, was born to one of the most powerful families in Spain, the Mendozas. At the age of 13, she married Rui Gomes da Silva, a councilor and favorite of King Philip II of Spain. Da Silva’s position in court was rising and so was Ana’s. She became a friend of Queen Elisabeth of Valois. At that point, she was already wearing the eyepatch, though to this day the exact reason for it is not known. It is assumed she suffered an injury, possibly fencing, and lost an eye as a result. This did not diminish her beauty, for which she was famous. She had ten children with her husband, but there are also rumors that she had an affair with King Philip II and some of the children were his, though this has never been confirmed.

In 1573 Rui Gomes da Silva died. After becoming a widow Ana entered a convent in Pastrana. Ana called on Teresa of Avila to found the convent in 1569 and the now saint obliged and founded not one but two convents: one for men, San Pedro, and another for women, San José. It is said that even though Ana willingly joined the convent after her husband’s death, she was more reluctant to dispense with her class privileges. This led to conflict with Saint Teresa, who was in the midst of the reformation of the Carmelite order. After three years, Ana left the convent and returned to the court life she knew so well.

At that time she allied – and some say also had an affair – with the King’s undersecretary of state, Antonio Pérez. She continued to correspond with many influential people of that time and expressed her ideas on life, religion, and politics freely, which gained her friends as well as enemies. In 1578 Antonio Pérez instigated the murder of Juan de Escobedo, a servant of the king’s half-brother, Juan de Austria. The crime was authorized by King Philip II, but he was soon overcome with guilt. To clear his conscience he decided to go after the people who he held responsible in his mind: Antonio and Ana.

Antonio managed to flee the King’s vengeance, but Ana was arrested in 1581. She was condemned to strict house arrest and died alone in the Pastrana palace, not allowed to manage her estate or contact her children. Meanwhile, Antonio led quite an adventurous life, seemingly unmoved by the misfortune of his former ally. Ana could probably beg for forgiveness and it would have been granted, for this harsh punishment was not typically applied to aristocrats. She decided to apologize for nothing, bear her punishment, and make her point this way. The whole situation caused a scandal at the court.

Her life proved to be very inspirational to artists. Having had numerous portraits painted, she continued to be a muse even after her death. There is a character called Princess Eboli based on Ana in Schiller’s play Don Carlos, Infant von Spanien, and Verdi’s opera Don Carlos. She is also the subject of Kate O’Brien’s novel That Lady, and the 1955 film adaptation of O’Brien’s novel, That Lady, starring Olivia de Havilland as Ana. Not to mention numerous television series. She herself may have been defeated but her spirit certainly was not.