Pink Unicorns and Cowboys: Welcome to Will Cotton’s Own Wild West 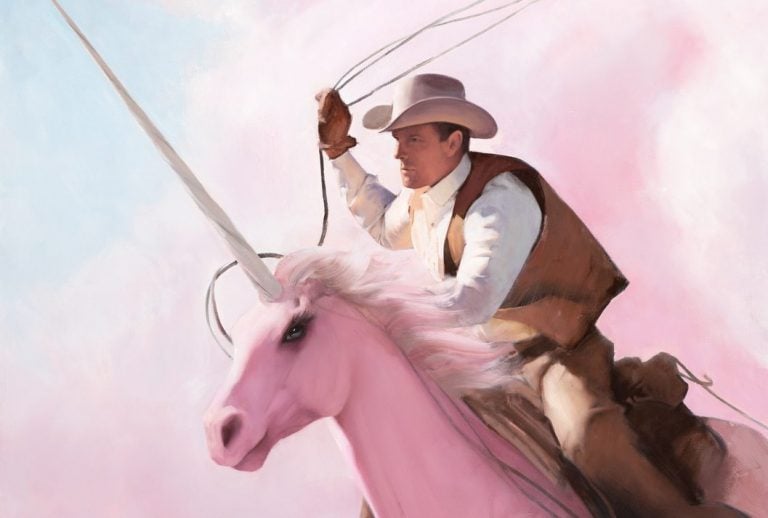 New York-based artist Will Cotton is widely known for his distinctive iconography and style. Even those uninterested in art will recognize his candy clouds and foodscapes from his collaboration with Katy Perry. But aside from his artistic directorship of Perry’s California Girls, the chart-topping single which saw the launch of her Teenage Dream era, Cotton has been experimenting with painting since the 1990s.

Inspired by pin-up posters, Candy Land, and William Adolphe Bouguereau’s mythic nudes, Cotton works in a photo-realist style to play on desire. Continuously seeking to visualize his striking scenes, he often builds his own sets and props to accompany his paintings from life. Cotton has long merged real women with sweet treats, creating a sensory pleasure for viewers. Although, in Cotton’s world, a dark cloud of consumer culture lurks behind what is soft, pink, and sugar-coated. Taking elements of advertising, he channels what makes us yearn for more. Taste, beauty, and idealized forms come together to build his utopias, highlighting the excess of society.

Cotton’s 2020 show at Galerie Templon in Brussels depicted a new subject in his foodscapes. The exhibition was his first at the space in 10 years, and featured oil paintings and drawings. Titled The Taming of the Cowboy, the show drew on a visit to Wyoming. Cotton had previously spent little time in Western America, only seeing cowboys through films and American myths. Throughout a residency he was completing there, he began to sketch cowboys in their natural environment, considering their actuality as well as what they have come to symbolize.

Over time, cowboys have grown to represent Western dominance, American masculinity and power. Cotton’s depictions are contrasting, now making traditional cowboys ride pink unicorns amongst cotton-candy clouds and marshmallows. It is no coincidence that the exhibition was in the midst of an electoral campaign, as a symbol of American history straddles what is pink, magical and free.

Although fascinated by Wyoming’s real-life cowboys, Cotton didn’t see them as a lone creative vision. Previously he had been working on a unicorn character, which soon became the perfect steed for his cowboys. Like cowboys, unicorns have a plethora of associations: fluidity, individuality, and of course, LGBTQ mascot. Merging the two icons highlighted the politics behind the series, with the figures sometimes in conflict and others united. Blurring the lines between the masculine and feminine, or real life and magic, Cotton challenges societal boundaries to charge into a more liberal world.