Wearing the Message: Changing the World One Outfit at a Time 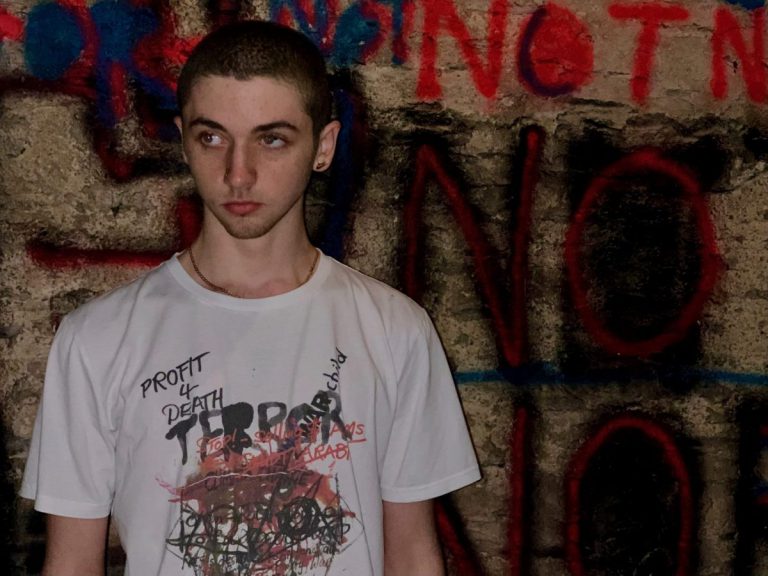 From the original silk banners worn by the Suffragettes, through to slogan T-shirts, we often quite literally wear our protest message. This personal, physical act is almost common-place now, so has it lost its potency? Is a political T-shirt just a throw-away fashion statement?

Exploring protest T-shirts as objects of resistance and solidarity

Protest art is everywhere. Sometimes in galleries and museums but also, perhaps more importantly, out in public spaces. What can protest art offer us in our everyday life? Let’s head out into the street.

Protest T-shirts can start a conversation. The problem is if we wear the T-shirt as the endpoint. If your slogan T-shirt is simply worn to patronize others, or to ‘virtue signal’ your impressive morals, then you’ve got it all wrong, opting out of genuine engagement. But, if done with passion and pride, small unspoken acts of dissent, like wearing a slogan T-shirt, can provoke debate and encourage solidarity.

Let’s face it, everything we wear is burdened with meaning. What we wear is a coded extension of our bodies and our place in the world. And today almost any campaign or movement has a protest T-shirt to help raise awareness and funds.

You may be surprised to learn that this is by no means a new phenomenon! T-shirts have a long history of use by activists to amplify their message. Art historians believe the first political T-shirt was made for the campaign of the American Republican candidate Thomas E. Dewey when he ran for President in 1948. The T-shirt was emblazoned with his face and the message ‘Dew It With Dewey.’ A cool idea (for 1948), although he lost the election.

And let us not forget the American Civil Rights and Black Power movements, which produced some of the most iconic images and T-shirt designs that are still being reproduced to this day.

American artist Jean Michel Basquiat ran away from home and school at 15. He supported himself by selling hand-made T-shirts and postcards. Combining poetry, text, drawing, painting, and graffiti into his artworks, he was famous for making art out of any materials to hand – walls, doors, scraps of paper. The reason for that wasn’t just artistic experimentation, it was poverty, and T-shirts were an obvious choice of medium. In the 1970’s he was producing hand-painted up-cycled clothing, a project he called ‘Man Made’.

By the 1980s, Basquiat was exhibiting his neo-expressionist paintings in galleries and museums around the world. His art focused on issues such as wealth versus poverty and integration versus segregation. He attacked power structures and systems of racism. A complicated young man, he achieved huge success but struggled to fit into the art establishment world. He died in his art studio of a heroin overdose, aged just 27.

Vivienne Westwood has been one of the most prolific designers of slogan T-shirts since the 1970s. In 1975, one of her designs – of two cowboys touching penises – led to a shop assistant being arrested for ‘indecent exhibition.’ Vivienne Westwood is still politically active today, launching and supporting campaigns such as Climate Revolution in 2012 and Save the Arctic in 2013. Our headline image shows her more recent ‘War Child’ T-shirt in support of the War Child UK campaign to protect children caught up in war.

UK designer Katharine Hamnett has been making bold statements on T-shirts since the 1980s. In 1984 Katharine Hamnett arrived at a Downing Street cocktail party to greet Prime Minister Margaret Thatcher wearing a T-shirt announcing ‘58% don’t want Pershing’. Katharine Hamnett pointed out just how unpopular Thatchers’ policies were – the general public did not want to want to be blown up by intercontinental ballistic missiles.

“Slogans work on so many different levels; they’re almost subliminal. They’re also a way of people aligning themselves to a cause. They’re tribal. Wearing one is like branding yourself.”

LGBTQ+ communities are particularly prolific when it comes to creating original, satirical resistance slogans. Browse the Wearing Gay History archive for lots of fantastic images. One of the simplest, most popular designs is ACT UP’s famous pink triangle ’Silence = Death’, a vivid response to the AIDS crisis of the 1980s. Gay activists were creating T-shirts to help draw public attention to a crisis that was being largely ignored. Keith Haring made this even more unforgettable in his artwork.

Of course it’s not just T shirts. Let’s look at the craftivist project Pussyhat which grew around the women’s protest marches following Trump’s election in the USA. Rejecting Trump’s sexist language, women reclaimed the color pink as a symbol of strength. They celebrated knitting and crocheting which are traditionally considered ‘women’s crafts’.

Marchers made these hats themselves, rather than buying them ready-made. Wearing them on political marches, they became a powerful and very visible act of protest. Patterns for the simple hats were circulated widely for free on the internet. Look at the march image above – it’s a sea of pink hats.

Social media played a huge part in the spread of these messages. Patterns for the simple hats were circulated widely. As well as studying the story of this and other craftivist projects, students could make their own hats. If they didn’t have time to learn knitting or crocheting, there were patterns for fleece hats constructed with very simple sewing techniques. Of course, for every Pussyhat there is a Donald Trump ‘Make America Great Again’ cap, proving that wearable art can cover the whole political spectrum.

This art form comes right up to the present with Black Lives Matter campaigners resisting state and police violence in its many, insidious forms. The deaths of unarmed black citizens such as Eric Garner, Michael Brown, John Crawford, and Tamir Rice sparked outrage across America and the wider world. Sportspeople and activists wore T-shirts emblazoned with ‘I can’t breathe’ slogans. Both praise and criticism were heaped upon them and some sports players were suspended. It was an emotionally charged and immensely powerful protest that drew global attention.

T-shirts can have a problematic environmental story though. Growing cotton takes millions of liters of water in countries where it is often in short supply. Pesticides and other chemicals poison the ground the cotton grows on. Cotton pickers often live in poverty, consuming a toxic mix of pesticides from the crop. Mixed fibers can produce microplastics which pollute our oceans and kill sea creatures.

There are companies who ensure their products are kind to people and the planet. You just have to do your research. For instance, UK based Accidental Republic produce the T-shirt shown below using environmentally friendly dyes and ethically sourced cotton and bamboo.

When we buy a T-shirt, do we know where the money is going? T-shirt sales can provide a welcome boost to under-funded campaign groups or small community-based print companies. But a cheap, throw-away T-shirt might be doing more harm than good. It would be ironic if our feminist T-shirts were made by exploiting women in sweatshops in India or South America. And if the T-shirt is expensive, check who gets the cash.

In 2017 fashion house Dior released a T-shirt reading ‘We Should All Be Feminists’ which sold for over $700 each. The quote is by writer Chimamanda Ngozi Adichie. Dior received criticism for stealing the writer’s words without authorization or credit and selling the T-shirt for pure profit. Under pressure, Dior was shamed into donating all proceeds from T-shirt sales to the Clara Lionel Foundation, set up by singer Rihanna to offer emergency aid across the world.

Glastonbury Festival was headlined by superstar rapper Stormzy in 2019. He led the crowd in a chant of ‘fuck the government and fuck Boris’ (a reference to UK Prime minister Boris Johnson). Stormzy came to the stage wearing a Union Jack stab vest designed by artist Banksy. Stormzy, who highlights racism and social exclusion in his music, received worldwide attention, and that performance was a key moment in British cultural history.

Two days later the musician Loyle Carner took to the stage wearing a T-shirt that read ‘I Hate Boris’. This toned-down version of ‘Fuck Boris’ was designed to get past the BBC censors and spread the message. Just this year a woman wearing a ‘Fuck Boris’ T-shirt was stopped by police in London and told that it was against the law. She refused to be cowed but was forced to cover up with a coat or be arrested. So, it is clear that the slogan T-shirt still retains an ability to have an impact and make a point!

An interesting twist to wearing the T-shirt yourself is dressing a significant monument. Artist Ivan Argote, born in Colombia, covers colonist statues with South American ponchos, in defiance of the European narrative of conquering heroes who in fact stole and pillaged native lands.

The humble T-shirt simplifies complicated issues into a wearable yet powerful message. We still need political T-shirts because we still have injustice. Anywhere power struggles persist, artists, designers, and activists will give us responses we can wear and share. Perhaps even more powerfully, we can screen print, paint or sew our own. We shall overcome!