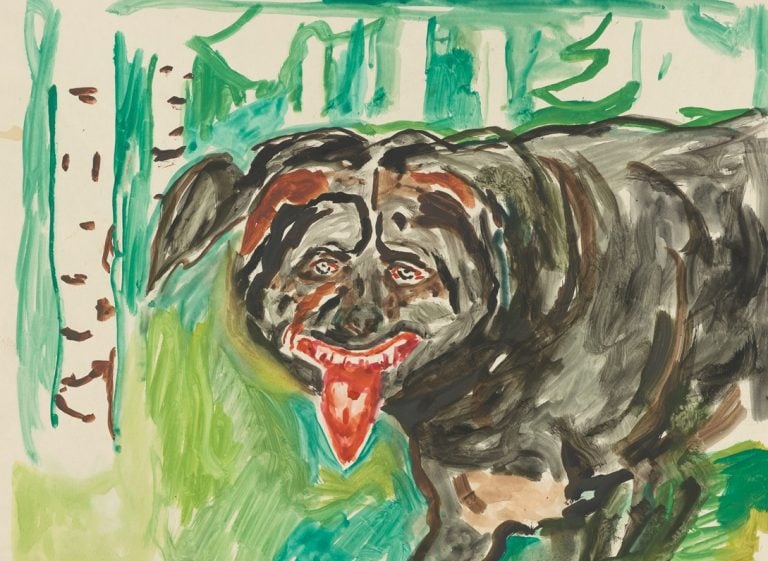 Have you ever dreamed of becoming an artist but worried that you just don’t have the talent? Then this article is for you! Take a look at some of the weirdest, ugliest works from art history and be reassured that we all have off days. This is the art equivalent of a bad hair day. I’m not talking about art that is lazy (I’m looking at you Damien Hirst). I’m not talking about those terrible (oops, I mean lovely) works your kid proudly hands to you to stick on the fridge. Here at DailyArt Magazine we applaud any art if it makes you happy or gets you through your day. But when trained, experienced artists get it horribly WRONG? Yeah, we do have a laugh at that. This my own personal top 10. Take a peek, and have a giggle.

Let’s start with an absolute corker. Anyone out there ever met a child with a beard that reached down to their waist? Me neither. This must be an ancestor of those bearded rockers, ZZ Top. Albrecht Dürer’s Weeping Angel Boy from 1521 almost made the list too – a devilish looking child with a grossly contorted face. His zoo animals are much better. Albrecht, my advice is, cut back on the hallucinogens.

The infamous darling of the Expressionist movement, Emil Nolde produced some gorgeous if sometimes foreboding landscapes. But this one is kind of – terrible? And the cats are ghastly. Maybe stick to fields and flowers Emil, because your experimental exoticism is the stuff of nightmares. Maybe reconsider your zealous allegiance to the Nazi party too, just saying.

There is a whole world of memes concerning ugly Renaissance babies. Maybe these male Renaissance artists just never had much contact with babies (women’s work of course). We mostly see gruesome male heads grafted onto contorted, muscular baby bodies, and to our modern eye it’s quite odd. They’re also sexually charged as they are usually feasting on a breast. The Italian painting above is an absolute classic of weird babies surrounding a stressed and over-wrought Madonna. It reminds me of myself during school summer holidays. Feast your eyes on those faces – and why is everyone wearing lipstick?

Can I please squeeze one more virgin in? This is a monster mini-man and I cannot stop staring at him! Check out the tiny right shoulder of the Virgin and compare it with the enormous girth of her left arm ending in those chunky mangled fingers. And look into her eyes – she cannot believe she birthed this creature. Oh Mary, neither can I.

The actor Pierce Brosnan has had highs and lows in his career. He wowed us as James Bond but his singing in Mamma Mia made many squirm in their cinema seats. And now, he has a website devoted to his art. Some of it is rather lovely Post-Impressionist-style flowers and scenes. However some seems to be channeled directly from nightmares that you shouldn’t share with the wider public.

Possibly one of finest singer songwriters of the century, Bob Dylan is a god! His music is the soundtrack to lives across the globe – he can make you sing, sigh, laugh, and cry with his melodic genius. And then he turned to painting. The self-portrait above was from a 1970 album cover. There is a private gallery in Birmingham, UK, devoted to his work. It is almost always empty, and with good reason. Bob, I love you, but you are breaking my heart with this frightful art!

Let’s move from celebrity art to artificial intelligence art. Some fear that AI is a threat to humankind – the machines are taking over! Others say they may be the answer that saves humanity from itself. But if this image tells us anything, it is that AI is a long way from understanding our creative impulses. This image makes me feel sad. I just want to put my arm around the computer who created this masterpiece, and say “there, there, you tried your best,” then reach back and flick the off-switch, permanently.

Yes, I dare to put one of the greatest artists in the world on my list! Pablo Picasso is a controversial character, and his personal life was a mess, but there is no denying his immense genius across a career spanning decades. But then there’s this travesty. The body is awkwardly drawn, with “feet like a monkey” as American novelist Gertrude Stein put it. Also the idea that the artist took such a cold yet detailed interest in the pre-pubescent body of a vulnerable street girl is frankly repulsive. Art critic Sir John Richardson, Picasso’s biographer, disturbingly described the child as “a sultry looking gamine.” I say this: Pablo, you are a pervert.

I struggled to find a bad still life – it’s hard to go wrong with flowers and fruit if it’s just sitting there on the table right? Wrong! Add in a cat and some bread, and presto, you have a smorgasbord of truly awful art. Oh, and cat hair in the butter. Fernando Botero is known for his voluptuous human figures, and his cats are clearly no different. We all love a chonky cat, but perhaps not on the dinner table. What’s that? Join you for some soup Fernando? Um, no thank you, I have a prior engagement!

We will end with this truly awful portrait. Edvard Munch apparently had a long running dispute with his neighbor, the owner of this dog, and hated it. Edvard, we can tell. My therapist tells me that painting or sketching when you’re angry can be very therapeutic, and we all recognize the pain expressed in The Scream. The dog in the painting above was called Rolle, and he had a traumatic puppy-hood, neglected and tied up, so his behavior was sometimes problematic. Munch had little sympathy and even threatened to shoot Rolle. Edvard, shame on you!

These artists produced some truly gruesome art but they put it out there in the public eye anyway. I applaud their confidence! So, are you amused or infuriated with my choices? Let me know! And if you feel I have left some artistic abomination off my list, I’d love to see it!