Albrecht Dürer’s keen interest in nature was a typical manifestation of the Renaissance. Animals were not generally considered to be appropriate subjects for serious art until the eighteenth century. Painting of animals were considered to be simply a demonstration of technical skill, and as such did not aspire to the creative vision of great art. Dürer was one of the first artists to view animals as a subject worthy of attention. Here we present seven animals created by Albrecht Dürer that prove his genius (and are better than the live ones in a zoo): 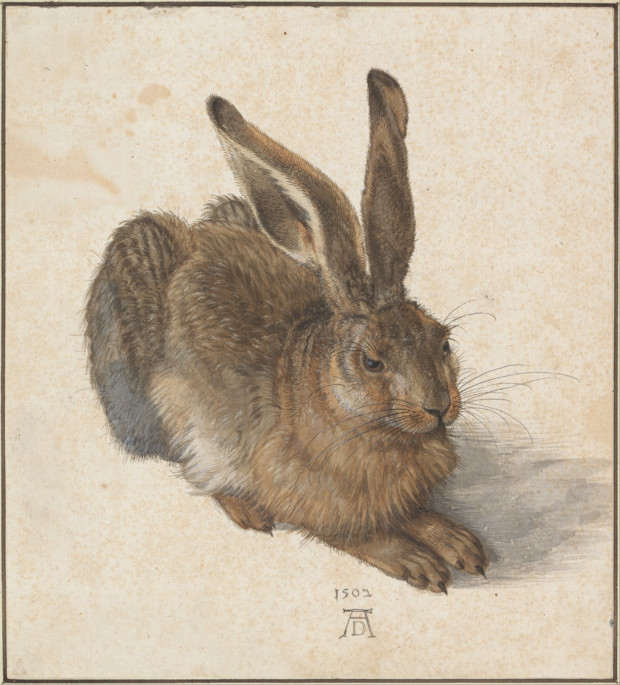 Dürer probably painted the hare from both a stuffed model and a very careful observation of live animals. He created it when he returned to Nuremberg after his first trip to Italy. The painting itself was created using both body color (also known as gouache) and watercolor; two mediums Dürer frequently used. He also added the white highlights and the shadow that helps to give the animal a three-dimensional appearance. 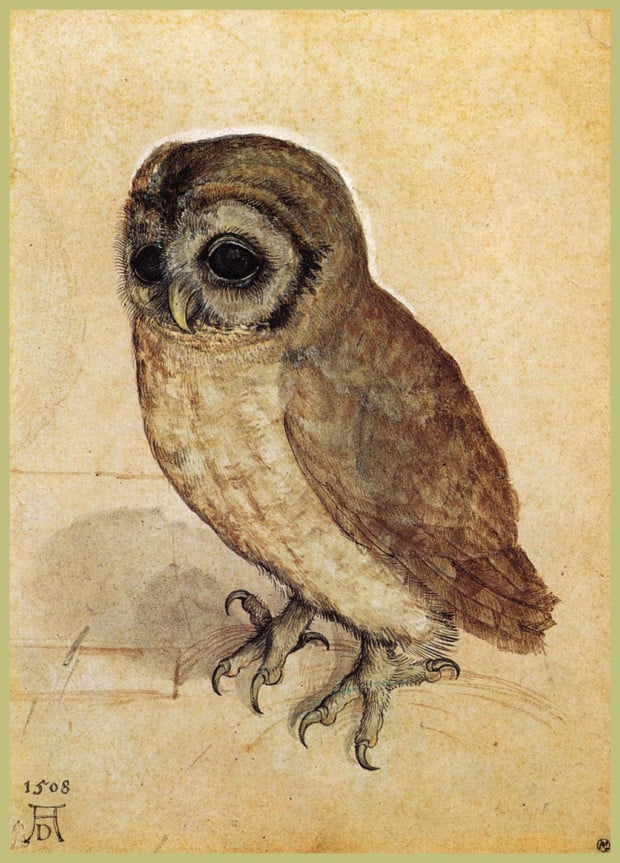 The owl symbolizes the mystery of the shadows of the night. In European traditional folklore the owl is considered to be a creature of ill omen but of course here, Dürer presented the owl with full realism, without a shadow of superstitious beliefs. 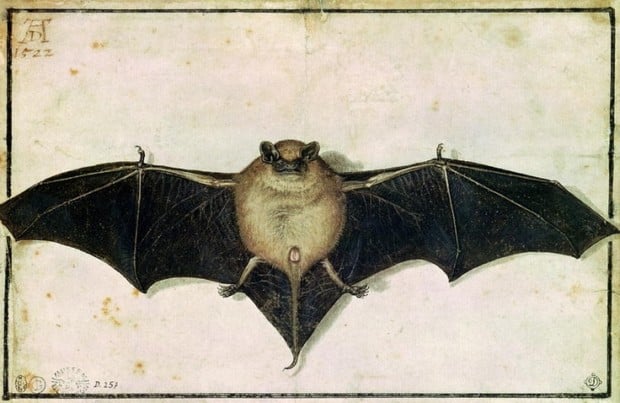 Dürer was fascinated by nature as he believed that the study of the natural world could reveal the fundamental truths he was seeking to discover through his art. He wrote, “Nature holds the beautiful, for the artist who has the insight to extract it. Thus, beauty lies even in humble, perhaps ugly things, and the ideal, which bypasses or improves on nature, may not be truly beautiful in the end.” 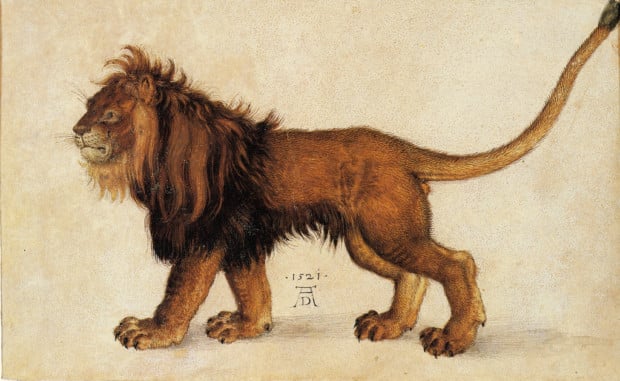 Dürer painted, engraved or drew lions couple of times. They were separate studies or parts of other scenes, like “Saint Jerome in His Study” who is usually presented with a lion (as he domesticated one) and “Samson Rending the Lion”. 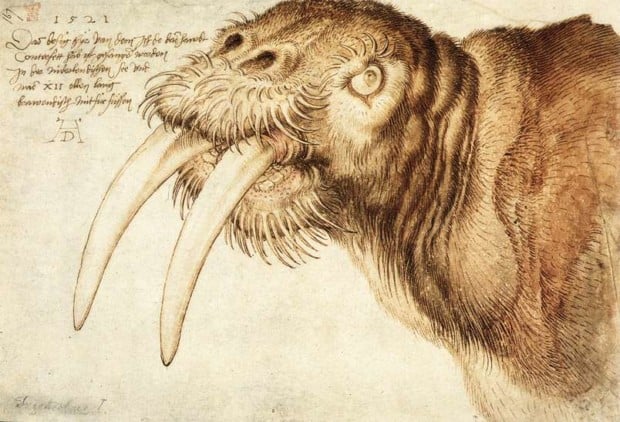 In 1520 Dürer travelled to Zeeland in the Netherlands, supposedly to see a stranded whale. The beast had decayed before he arrived, but instead he was shown a walrus. Dürer made a watercolour sketch of the animal in his “Tagebuch der Reise in die Niederlande” (“Diary of of a journey in the Netherlands”). In Dürer’s day, walruses were to be found on the north coastal regions of the North Sea, mostly in Norway, and must have seemed very exotic to a citizen of one of the most landlocked cities of Europe. 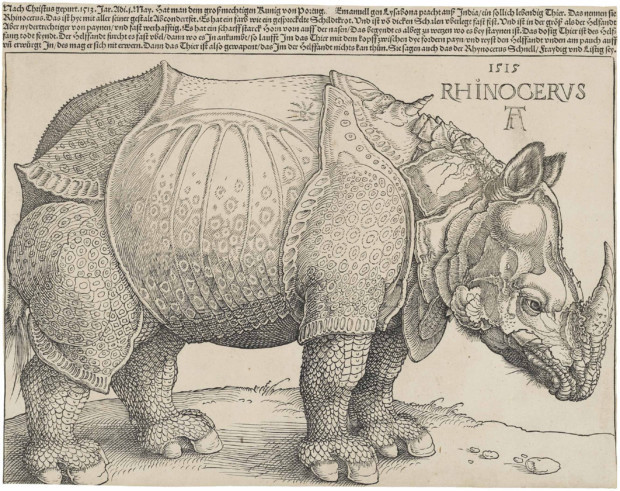 Dürer’s woodcut is not an entirely accurate representation of a rhinoceros. It is because this image is based on a written description and brief sketch by an unknown artist of an Indian rhinoceros that had arrived in Lisbon in 1515. Dürer never saw the actual rhinoceros, which was the first living example seen in Europe since Roman times. In 1515, the King of Portugal, Manuel I, sent the animal as a gift for Pope Leo X, but it died in a shipwreck off the coast of Italy in early 1516. A live rhinoceros was not seen again in Europe until a second specimen, named Abada, arrived from India at the court of Sebastian of Portugal in 1577, being later inherited by Philip II of Spain around 1580. Anyways this image was regarded by Westerners as a true representation of a rhinoceros into the late 18th century. 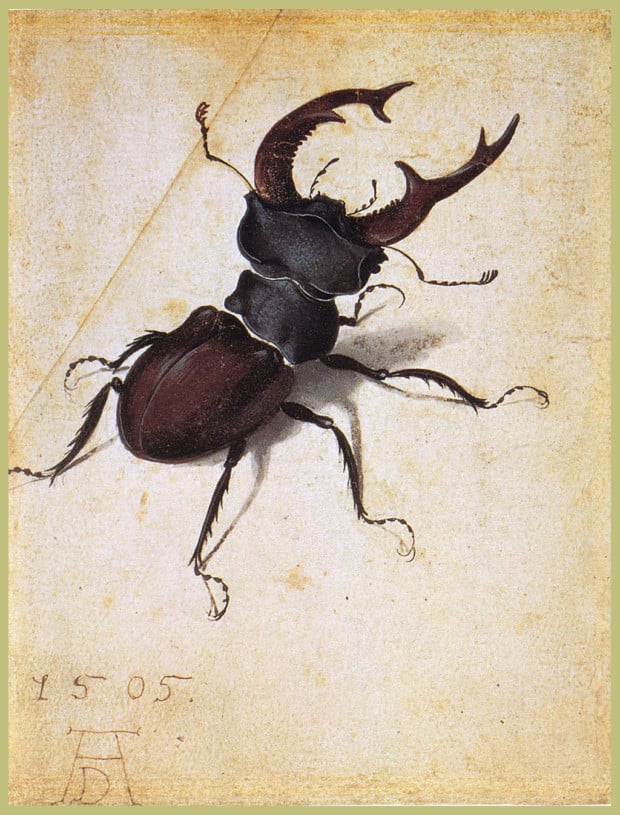 It is probably the earliest European picture of a beetle that can be reliably identified to the species. Dürer probably made this drawing in the studio, based on quick sketches from nature and memory. Singling out a beetle as the focal point of a work of art was unprecedented in 1505, when most of Dürer’s contemporaries believed that insects were the lowest of creatures.

If you find any joy and inspiration in our stories, PLEASE SUPPORT
DailyArt Magazine with modest donation. We love art history and we want to keep going with writing about it.
$5 $10 $25 $50 $100 MONTHLY
Related Topics:Animals