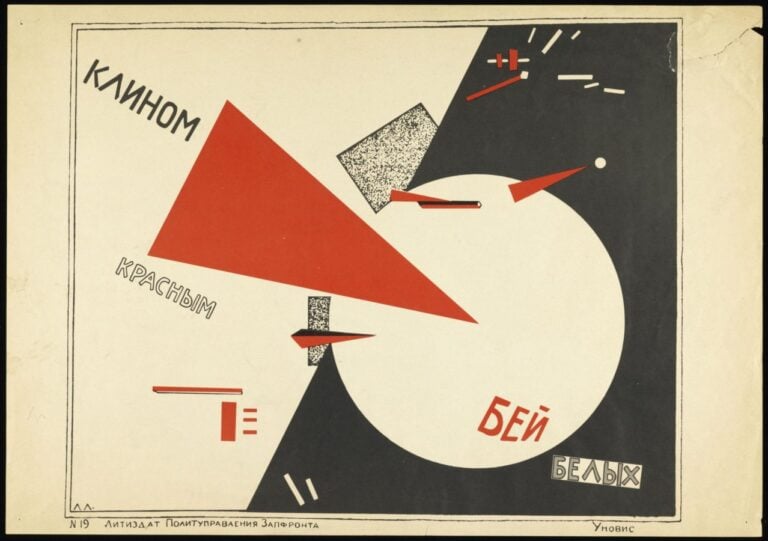 Beat the Whites with the Red Wedge is one of Lissitzky’s earliest attempts at propagandistic art. He produced this and other politically charged work in support of the Red Army shortly after the Bolsheviks had waged their revolution of 1917. The lithograph shows a huge red triangle that pierces into a white circle, which creates the center of attention. The red wedge symbolized the revolutionaries, who were penetrating and killing the anti-Communist White Army. The white background depicts a bright future. El Lissitzky used his signature color combination of red, white and black, which reinforces the message indicated by the work’s title. Also, the shapes have their symbolic significance.

According to El Lissitzky and his friends, the art before 1917 was “old-fashioned” compared to new art movements called Constructivism. And this poster is a great example of this movement. Futuristic, containing new tools, new style and artists was all about moving forward. The main goal of this art was to spring Russia into the future.

Constructivism was more than art – it was a philosophy originated in 1913 by Vladimir Tatlin but the term was first used as a derisive term by Kazimir Malevich to describe the work of Alexander Rodchenko in 1917.  As a positive term in Naum Gabo’s Realistic Manifesto of 1920.

Constructivism as theory and practice was derived largely from a series of debates at the Institute of Artistic Culture (INKhUK) in Moscow, from 1920–22. After deposing its first chairman, Wassily Kandinsky, for his ‘mysticism’, The First Working Group of Constructivists (including Liubov Popova, Alexander Vesnin, Rodchenko, Varvara Stepanova, and the theorists Aleksei Gan, Boris Arvatov and Osip Brik) would develop a definition of Constructivism as: “the combination of faktura: the particular material properties of an object, and tektonika, its spatial presence.”

Constructivism was about an entirely new approach to making objects, one which sought to abolish the traditional artistic concern with composition, and replace it with ‘construction.’ The movement called for a careful technical analysis of modern materials, and it was hoped that this investigation would eventually yield ideas that could be put to use in mass production, serving the ends of a modern, Communist society. But, the Russian Constructivism was in decline by the mid-1920s, partly a victim of the Bolshevik regime’s increasing hostility to avant-garde art. But it would continue to be an inspiration for artists in the West, sustaining a movement called International Constructivism which flourished in Germany in the 1920s, and whose legacy endured into the 1950s. It also influenced major trends such as the Bauhaus and De Stijl movements. Its influence was widespread, with major effects upon architecture, sculpture, graphic design, industrial design, theatre, film, dance, fashion and to some extent music.

El Lissitzky in 1921 took up a job as the Russian cultural ambassador to Weimar Germany, working with and influencing important figures of the Bauhaus and De Stijl movements during his stay. In his last years, he brought significant innovation and change to typography, exhibition design, photomontage, and book design, producing critically respected works and winning international acclaim for his exhibition design. This continued until his deathbed, in 1941 he produced one of his last works – a Soviet propaganda poster rallying the people to construct more tanks for the fight against Nazi Germany.