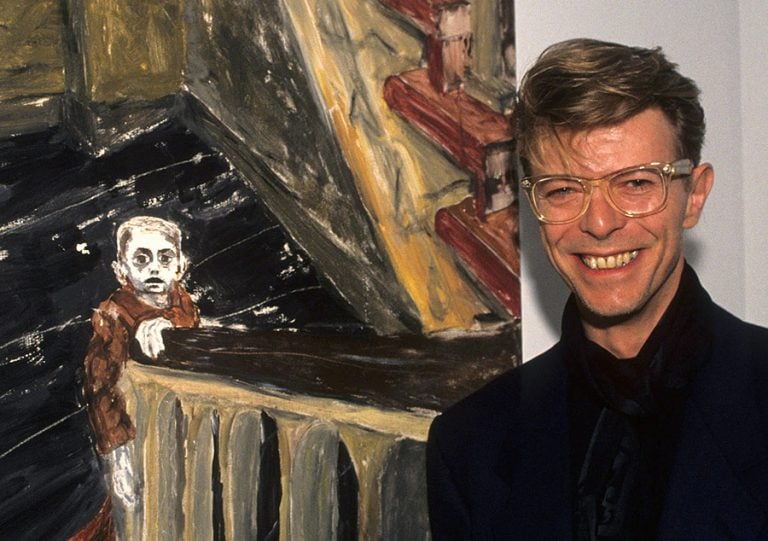 David Bowie and one of his paintings during an Eduard Nakhamkin Fine Arts Gallery event for The American Cancer Society in 1990 in New York, NY, USA. Photo by Ke.Mazur / WireImage / GettyImages.

Most people know David Bowie as a pop star and performer, but do you know his secret talent? He embraced the fine arts as well as music, and performing arts and was also very passionate about painting. To express himself, he created lots of works that show a touch of Neo-Expressionism. Meet David Bowie the artist and see his paintings.

David Bowie (1947–2016) showed his creativity mostly in his music and released many successful albums during a career spanning 5 decades. He was quite unique throughout his career because he managed to keep up with the latest trends as well as being an icon of fashion and performance. Just like a chameleon, he has transformed himself several times by performing under his alter-egos, such as the flamboyant Ziggy Stardust and the elegant Thin White Duke.

He didn’t limit himself to music. Bowie also acted in several movies and stage productions. Having a creative mind, it shouldn’t come as a huge surprise that he also expressed himself through other arts such as painting.

In the early stages, Bowie didn’t have great ambitions for his painting. It was a private thing and was about problem-solving. Whenever he encountered a creative obstacle in the music he was working on, he would revert to drawing and painting. You can see that, for example, in Turkish Father and Son, a canvas that he made while writing the song Yassassin. The melody has a strong Turkish flavor and the title is Turkish for long life.

The public is more appreciative of Bowie’s music compared to his painting. That is probably why this artistic side of Bowie isn’t very well known. It wasn’t until 1995, when he used a self-portrait on the cover of his album Outside, that he had his first exposition New Afro/Pagan and Work: 1975-1995 at The Gallery in London. A year later, he featured in an art gallery in Basel, Switzerland.

In a way, he longed to be considered as a valid artist, but at the same time, he wasn’t very sure what he was doing. When exhibiting in The Gallery, he stood in the back and watched people standing in front of his work and coming up with their own explanations for what it was. He enjoyed the attention but was also confronted with a lack in his technical skills.

He studied music (baritone sax), art and design at school. Throughout his early career, it became very clear that he didn’t limit himself to his music, but also took part in the design of his costumes. He even designed stage sets. He made several studies for the video clip that accompanies the hit Ashes to Ashes. It must be said that this artistic influence on all that he did can’t be attributed to himself alone. He was greatly supported by Angela Barnett, his first wife. Angie would be immortalized later in The Rolling Stone’s song, Angie.

Dwelling around the artistic scene, Bowie became fascinated by Andy Warhol after seeing a 1971 screening of the play Pork in London. That experience led Bowie to write the song Andy Warhol as a single for his fourth studio album, Hunky Dory. Through Warhol, he became acquainted with Jean-Michel Basquiat and later in 1996, he starred as Andy Warhol in the movie Basquiat directed by Julian Schnabel.

Bowie was influenced by the artists Frank Auerbach, David Bomberg, Francis Bacon and Francis Picabia. He was a fan of Die Brücke group, a German Expressionist group of the early 1900s.

His brushwork is very expressive and he made use of bold colors. The rough impasto technique allows us to see the individual brushstrokes that he has used.

The subjects of his paintings were always close to him, like a set of the stairs of the ground floor of the Berlin apartment he shared with Iggy Pop in the late 1970s. He used this location to paint Child in Berlin. The lighter side of this painting is that there was in fact a dental practice on the 3rd floor of the apartment. The boy doesn’t look very happy, he might be about to have a tooth pulled.

He portrayed some of his friends, such as the rock star Iggy Pop and pianist Mike Garson. Knowing that he was suffering at that time from heavy drug use, the disturbing and haunted images might not surprise you. Alongside his technique, Bowie also shared the same language of intense emotions as the German Neo-Expressionists.

During his Berlin era, he recorded the albums Low, Lodger and one of his masterpieces Heroes. The cover of the latest album, designed by Masayoshi Sukita, is inspired by Erich Heckel’s 1917 painting Roquairol. He made a self-portrait drawing that shows some resemblance to the German Expressionist. Also, his friend, Iggy Pop, used this painting for the cover of his album The Idiot.

In the same way, as he was constantly in search of new ideas for his music, he continued to paint new subjects.

In 1995 he took a trip to South Africa with Iman, his second wife. He was struck by a story that revealed an ancient belief of the local people. Apparently, when the local tribes first came into contact with white men, they presumed that they were being visited by their ancestors. In their mythology, these ancestors appear in a ghost-like white form.

This story inspired Bowie to paint his series of Ancestors. He still used an expressive style of painting, this time combined with African elements such as animal skin patterns.

Next to his own painting, Bowie was also a collector of art. Although he claimed never to be driven by the work’s potential investment value, (he followed his own taste) he owned the works of top artists. Amongst the pieces he collected were artworks by Jean-Michel Basquiat, Henry Moore, Marcel Duchamp, Graham Sutherland and some ceramics from Picasso. Over the years, he had collected a broad range of art, from contemporary art to a 16th-century Venetian altarpiece by Tintoretto.

He got acquainted with some of the artists. The spin painting Beautiful, Hello, Space-Boy Painting is the result of a collaboration with the famous British artist Damien Hirst and David Bowie. It was a bit like a Jackson Pollock painting, but with two artists working together. While Bowie stood on a ladder and threw paint, Hirst was spinning the canvas beneath him. Sounds like fun!

After Bowie’s death in 2016, around 350 pieces of his collection were put up for auction at Sotheby’s in London. A packed salesroom and more than a thousand online bidders were interested in purchasing works from his collection. The sales came to a total of £24.3 million ($30.2 million) over two days.

Here you can enjoy some of Bowie’s paintings and sketches.