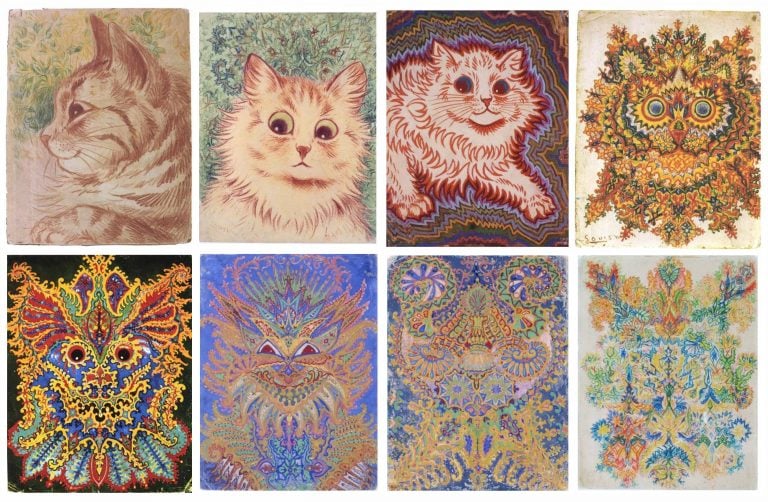 The British artist Louis Wain was a highly successful illustrator, mainly known for his humorous graphics of cats. His quirky feline pictures were so popular that almost every household at the beginning of the 20th century had at least one poster by him.

The story of Wain’s life was depicted in a biographical feature film The Electrical Life of Louis Wain (2021), starring Benedict Cumberbatch in the main role. You may have also seen his name in articles about mental illnesses among artists. What secrets does the life of this cat aficionado hide? Let’s present the life story of Louis Wain and his weird cats.

Only a Cat Knows Where It’s At

Although always sketching cats in random, anthropomorphic situations, Wain’s primary ambition was to become a press artist. He specialized in drawing animal and country scenes and was often featured as an illustrator in popular science and news journals. At 24 he sold his first cat drawing to Illustrated London News – a playful info-graphic on feline domestication.

Two years later, in 1886, Wain was commissioned to illustrate a children’s book, Madame Tabby’s Establishment. Written by Caroline Hughes/Kari, it tells the story of a school for kitten manners. No wonder Wain’s drawings were chosen, if there is anyone to depict the trials and tribulations of teaching little kitten manners, Wain was a match made in heaven.

The cats and kittens portrayed by Wain are famous for their playful, happy nature. Behind their cute (yet often weird) cat smiles, lies an unfortunate story of the artist. Louis Wain was born in 1860 in Clerkenwell, London, as the oldest of six children and the only male. His family had a history of illness, with his youngest sister admitted to an asylum at young age.

Wain was born with a cleft lip, a birth defect resulting in developmental problems. At the age of 20, after his father passed away, as the only male heir of the family he had to start supporting his sisters and his mother financially. First working as a teacher’s assistant, Wain soon moved on to pursue his talent in (mainly animalistic) illustration.

In 1883 Wain married Emily Richardson, who at that time was his sister’s governess. Not so long after their marriage Emily fell sick, suffering from breast cancer. Richardson had her own “support” animal, a stray cat called Peter, which the couple adopted. One of the cats portrayed in Madame Tabby’s Establishment was based on Peter’s character. This apparently made Richardson so happy that Wain decided to devote his life to sketching kittens, uplifting his dear wife’s spirit.

The cat craze started with the Christmas issue of Illustrated London News and Wain’s illustration of a Kitten’s Christmas Party. The feature contained images of over 150 cats preparing for Christmas celebrations: folding envelopes, making speeches, playing with balls… Or getting tipsy on punch.

Unfortunately, a few months after Wain’s huge Christmas kitten breakthrough Richardson passed away. The artist began to suffer from depression. As he continued his career we will soon see a slight change in the expressionist manner of his illustrations.

His anthropomorphic portrayals were extremely successful in Victorian England. Most of his characters walked upright, used facial expressions, and wore fashionable clothes. The illustrations were often caricatures or satires of “odd” human behaviors. The artist truly devoted the rest of his life to cats, becoming involved with animal charities, the anti-vivisection society, and the National Cat Club. Although very popular, he suffered financially throughout his life, giving away most of the money he earned to support his mother and sisters.

Aside from his illustrations and posters, Wain also created a series of “futurist cats” – small Koon’s-like decorative sculptures meant for resale. The futuristic sculptures were produced in China by Max Emmanuel and Co., registering nine designs. He did not have much luck here, however. Two months after the product’s launch, a cargo ship carrying the cats was hit by a torpedo during the war.

Even Cats Have Nightmares

There are many theories regarding Louis Wain’s mental illness, mainly tracing it to life loss and post-trauma. Some researchers claim, that the artist could have developed early schizophrenia due to the Toxoplasma gondii, parasite known to be carried and excreted by cats. The artists supposedly started displaying erratic and violent behavior soon after the passing of his wife. He was admitted to a mental hospital in Tooting and later, by the personal intervention of Stanley Baldwin (the UK’s prime minister at the time), was moved to a more upscale facility. He spent the last years of his life in Napsbury Hospital in Hertfordshire, where to his luck he could rest in a garden full of cats.

Even though he couldn’t continue his career in illustration he continued drawing. His work from this period is easily recognizable by his use of bright colors and abstract, often non figurative patterns. Did he stick with the subject of his life oeuvre, cats? Yes. Perhaps the cat colony inhabiting the Napsbury hospital’s gardens provided him with inspiration?

Art historians, theoreticians and psychiatrists often show the changes in Wain’s style as a textbook example of cognitive deterioration, connecting the move towards abstraction with the artist’s developing schizophrenia.

This theory was first raised by Walter Maclay, a British art collector and psychologist, who stumbled upon Wain’s work in a Nothing Hill secondhand shop. He created a collage rendering eight of the artist’s works, using it as a means to present the psyche’s deterioration. There are many controversies regarding this theory as Wain never dated his works, which trumps the “deteriorative” style timeline. However, something definitely changed in the happy cat world. The previously harmless, funny kittens became trippy and abstract creatures from a crazy man’s dream – judge for yourself.

I like cats and I’m sure that many of you do too. A fascinating animal, the cat has earned itself an important place in culture, literature, and...