Story of Pygmalion and Galatea by Sir Edward Burne-Jones 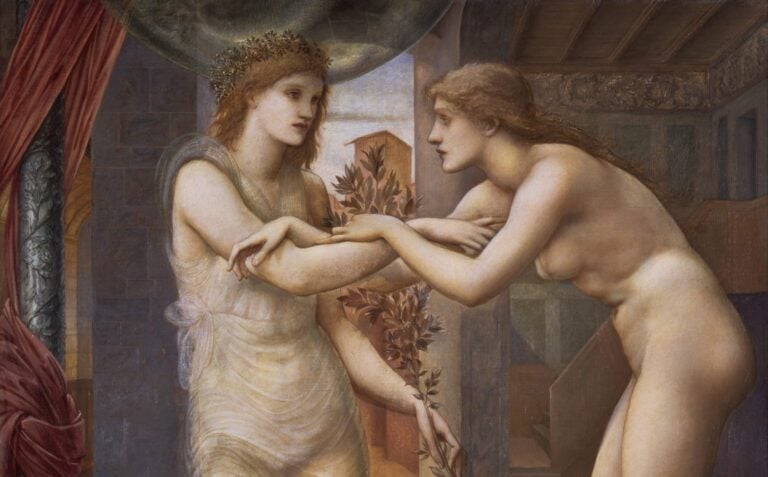 The story of Pygmalion and Galatea is an enchanting myth about a Cypriot sculptor who fell in love with his own sculpture. He prays to goddess Aphrodite (aka Venus) to bring the sculpture to life, because he plans for it to be his wife. The goddess grants his wish, and as a result, Pygmalion and his creation lived happily ever after.

Pygmalion and Galatea I: The Heart Desires

Pygmalion is here in his studio, with a look of deep thought etched on his face. Disgusted by the debauched lifestyle of the local women, he has therefore decided to stay celibate and devote his life to his craft. He is oblivious to the women peering through his doorway, along with his previous statues that remind us of the Three Graces. He sees in his mind an image of the perfect woman he has yet to create.

One day, Pygmalion completes his creation of the woman of his dreams. As a result, he falls hopelessly in love with it. In a moment of inspiration, he names the figurine Galatea. The meaning of the name is “she who is white like milk.” Countless are the nights and days he spends staring at her.
Tools and instruments, including the almost translucent soft brush, are scattered beneath the statue’s feet. This shows the work he has put into perfecting it.

In the meantime, the city is celebrating a festival in the name of the goddess Aphrodite. While making offerings to Aphrodite, Pygmalion prays with all his heart and soul for the goddess to bring his statue to life. Touched by his deep veneration, the goddess visits his studio. She is amazed by the beauty she has discovered. Consequently, she grants the artists his wish.

Upon returning home Pygmalion notices a flush on the cheeks of the sculpture. Therefore, he slowly realizes that his prayer was heard. He embraces Galatea, and life comes into the cold marble.
Their love blossoms and they exchange wedding vows. With the blessings of the goddess Aphrodite, they live happily ever after. The couple even has a son, Paphos, who later founded the city Paphos in Cyprus.

Burne-Jones made two series of oil painting illustrating the story. The first series of paintings consists of four panels. The artist made these between 1868-70, at an early stage of his career. With monochromatic tones and rather rigid forms, at the time the artist was still in the process of developing his style and emulated his mentor and friend Dante Gabriel Rossetti.

The second series, shown here, however, were made between 1875-1878. They feature a much brighter palette. They have the solemn and statuesque style of figures he is known for. Additionally, this series of paintings secured Burne-Jones as one of the most influential artists among the members of his group.