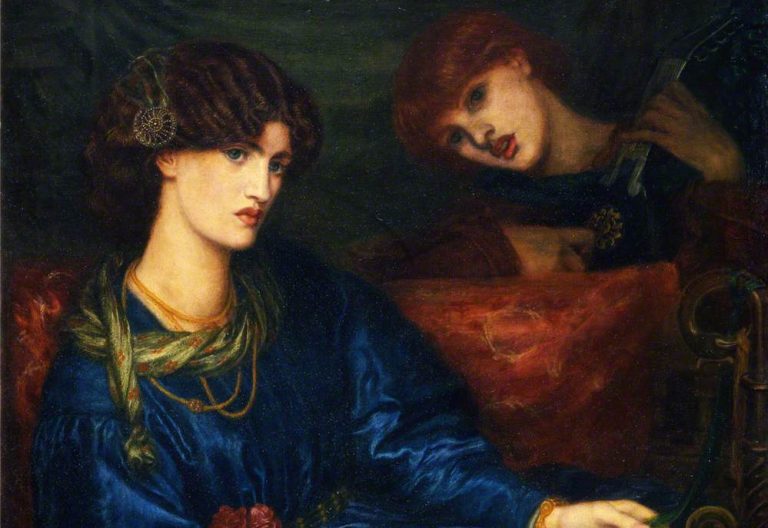 Each piece of jewelry in Dante Gabriel Rossetti’s paintings worn by his models wasn’t invented but copied from actual accessories from the artist’s collection. Pieces were carefully selected to complement the garment, color, and other aesthetic features of the painting. Rossetti kept a cabinet in his house at Cheyne Walk full of necklaces, brooches, and knick-knacks of all kinds.

Most of them were cheap pieces of costume jewelry, but some were his particular favorites. The spiral pearl pin, for example, was featured in quite a few of his paintings, including The Beloved, Monna Vanna, A Christmas Carol, Mariana, and The Bower Meadow.

Most of those items were sold after Rossetti’s death and cannot be traced. However, the following four items were bequeathed to the Victoria and Albert Museum in London by Jane Morris’ daughter May. Rossetti might have given them to Jane, his muse, and model for numerous paintings, including Proserpina, as a token of love during the period of their intimate relationship. All four of them are on display at the Victoria and Albert Museum in London.

The belt is worn by the central figure in Astarte Syriaca (1875–1877). Jane Morris was the model for the painting and it represents the goddess Venus. Only it’s not the European Venus portrayed by Sandro Botticelli, but a mysterious and more ancient Oriental goddess, who is identified as “Syrian Venus”. In the painting, Rossetti slightly simplified the floral design and turned the color from silver to silver-gilt – to match the tonality.

Jane Morris is portrayed wearing this chain in The Blue Silk Dress (1868) and Mariana (1870). Apart from the wedding ring, the chain could also have originally belonged to Rossetti.

The central motif of the bracelet is a pair of sea serpents on each side of a water pot with lion masks grasping the plated chain in their jaws. Rossetti first used this exotic piece in 1864 in Monna Pomona and it can clearly be seen worn by The Bride (1865–1866).

The brooch consists of two red and one green piece of colored glass within a heart-shaped mount with small rosettes and leaves filling the gaps. Though it was made with a vertical pin to be worn as a brooch, in The Blue Bower (1865) Fanny Cornforth wears it as a pendant, hanging provocatively at her throat on a chain. It echoes her red lips and the green silk of her robe.