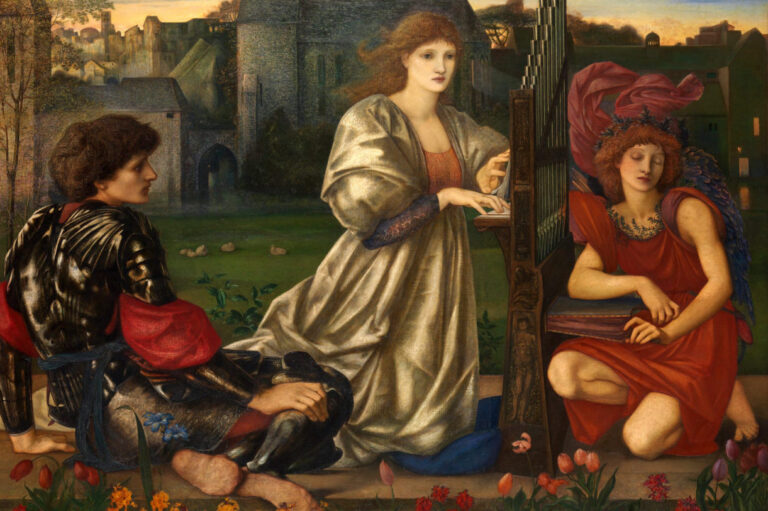 Story of Pygmalion and Galatea by Sir Edward Burne-Jones

Sir Edward Coley Burne-Jones, 1st Baronet ARA, was a British artist and designer closely associated with the Pre-Raphaelite movement. Middle Ages, Arthurian Legends, knights, and chivalry were among the artist’s favorite subjects. Everything started when Alfred Tennyson published Morte d’Arthur in 1842. When Burne-Jones read it with William Morris, it shooked him to the core. “Nothing was ever like Morte d’Arthur – I don’t mean any book or any one poem – something that can never be written, I mean, and can never go out of the heart,” wrote the artist. In this article, we present five Burne-Jones’ paintings with knights, magic, and a romantic vibe that will make you miss Arthurian Legends. Enjoy!

1. The Beguiling of Merlin

The painting depicts a scene from an Arthurian legend in which Merlin became infatuated with the Lady of the Lake, Nimue (also called Nimiane, Vivian or Vivien). She profited from his infatuation by learning his skills of enchantment. Here she is shown sending Merlin into a deep sleep. The model for Nimue was Maria Zambaco, Burne-Jones’ mistress from 1866 to 1872. Maria was a member of the Ionides family–important patrons of contemporary art in 19th-century London.

This painting is based on an 11th-century legend retold by Sir Kenelm Digby in Broadstone of Honour. Its hero is a Florentine knight named John Gualbert (in Italian: Giovanni Gualberto), who was also a saint and the founder of the Vallumbrosan Order. As the inscription on the painting says: of a knight who forgave his enemy when he might have destroyed him and how the image of Christ kissed him in token that his acts had pleased God.

One Good Friday, Giovanni was entering Florence, accompanied by armed followers, when in a narrow lane he came upon a man who had killed his brother. He was about to kill the man in revenge when the other fell down on his knees with arms outstretched in the form of a cross and begged for mercy in the name of Christ, who had been crucified on that day. John forgave him. He entered the Benedictine Church at San Miniato to pray and the figure on the crucifix bowed its head to him in recognition of his generosity. This is why he was canonized.

3. The Last Sleep of Arthur in Avalon

This massive painting measures 279 cm × 650 cm, and it is widely considered to be Burne-Jones’ magnum opus. Burne-Jones worked on this painting for thirteen years. Arthur became increasingly autobiographical for the artist, and Burne-Jones identified himself with Arthur.  As he said, “above all the picture is about silence.” The 1880s brought the deaths of Burne-Jones’ close friends. As they died, the artist experienced mounting isolation and painful awareness of his own mortality. According to the legend, King Arthur never died but slept on in Avalon, awaiting the moment when the nation most needed his return.

4. Sleeping Beauty, The Rose Bower from The Legend of Briar Rose

The Legend of Briar Rose is the title of a series of paintings by Burne-Jones completed between 1885 and 1890. The title of the series comes from the version presented by the Brothers Grimm in their collection of 1812. The four original paintings – The Briar Wood, The Council Chamber, The Garden Court, and The Rose Bower – and the additional ten adjoining panels–are located at Buscot Park in Oxfordshire, England.

The sleeping beauty lies on her bed, surrounded by her slumbering attendants. The rose is seen encircling the drapery in the background.

Under The Rose Bower, the inscription reads:

“Here lies the hoarded love, the key
To all the treasure that shall be;
Come fated hand the gift to take
And smite this sleeping world awake.”

Burne-Jones associated this painting with a refrain from a Breton folk ballad: “Alas, I know a love song, / Sad or happy, each in turn.” When the picture was first exhibited at the Grosvenor Gallery, London, in 1878, the novelist Henry James admiringly compared it to “some mellow Giorgione or some richly-glowing Titian.”