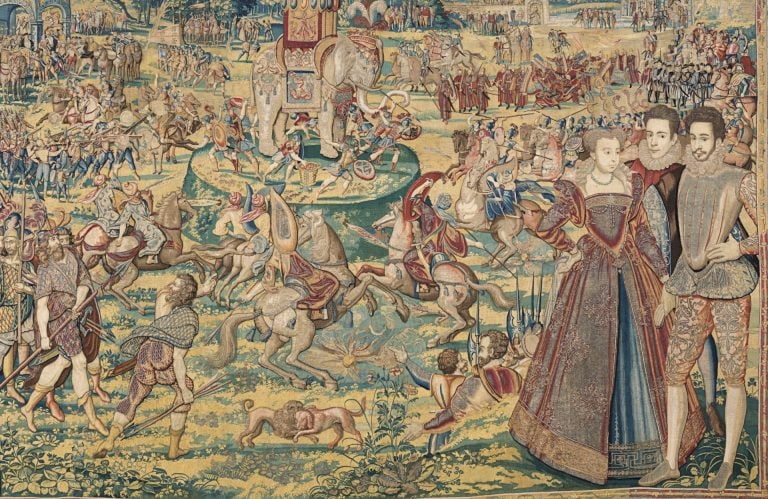 While today, tapestries are seemingly minor works of art, during the Renaissance, nothing was declared more spectacular than a set of tapestries woven in gold thread. For example, the Queen mother of France, Catherine de’ Medici, presumably commissioned a set of eight extravagant tapestries known as the Valois Tapestries. Depicted in the series are famous elaborate parties known as “magnificences” for which Catherine was known at the French court. But what did these Renaissance tapestries symbolize?

In 16th century Europe, nothing was considered more magnificent than the tapestries hanging on the walls of castles owned by elite and royal patrons. These impressive woven textiles were made from the finest materials such as wool, silk, silver, and gold thread. Through imagery, tapestries provided patrons a place to demonstrate their political and cultural ambitions. This practice was conveyed remarkably by Catherine de’ Medici, the queen mother of France in the 16th century. In 1533, Catherine de’ Medici married Henry II, who became king of France on March 31, 1547.

During his reign, Henry II initiated the Italian War of 1551-1559 against the Holy Roman Emperor Charles V. After Henry II died in 1559, the French crown went bankrupt due to extensive funding of the Italian War. As a result, Catherine negotiated loans to finance the extravagant parties required to uphold the monarchy’s image.1

History of the Valois Tapestries

Catherine de’ Medici commissioned the Valois Tapestries to depict the magnificent festivals at the court of France. The eight tapestries are based on designs by Antoine Caron and woven in Brussels by two unknown masters in 1576. Antoine Caron (1521-1599) was born in Beauvais, France, and was the court painter for King Henry II.2

Since there are no contemporary titles for the eight tapestries, in the 1950s, historian Frances Yates provided descriptions for each piece. In a set of eight scenes, the Valois Tapestries are entitled Journey, Elephant, Fontainebleau, Whale, Quintain, Tournament, Polish Ambassadors, and Barriers.

Today, the tapestries are held at the Uffizi Gallery in Florence, Italy. In 2018, they were displayed at the Cleveland Museum of Art in Ohio.

By the time of the Valois Tapestries’ production, all three of Catherine’s sons had become kings of France. First was her eldest son, Francis II, who became king in 1559, then Charles IX in 1560, and finally, Henry III, in 1574.3 Most of the scenes depicted in the tapestries allude to events during the reign of Charles IX in the 1560s.

Featured in the background of each tapestry is a courtly spectacle that provides a political or symbolic function. While in the foreground of each tapestry, there are famous life-sized figures such as those of Charles IX and his siblings. These figures were recognized through princely portraits intended to be used as dynastic praise and legitimized the Valois dynasty.

Because the Valois Tapestries are one of a kind, art historians are still perplexed by the purpose of the tapestry set. A few theories suggest the tapestries might represent a resolution between Catholics and Protestants during the Wars of Religion. Others believe Catherine commissioned the tapestries as a gesture of hope for reconciliation between her children. This belief is evident in Whale, where three of her children have a friendly interaction.

In Whale, Margaret de Valois and her husband Henry de Navarre are featured on the left of the tapestry. Standing between them is Charles III (Duke of Lorraine and their brother-in-law). The June 1565 celebration of Margaret and Henry’s marriage is illustrated in the background, with Charles IX and Henry III featured in support. However, it is well known that Margaret and her husband plotted to seize the French throne from her brothers. It is more likely the tapestry displays the reception of Queen Elisabeth of Spain meeting her brother Charles IX at Bayonne.

Therefore, due to the history of the diminishing Valois dynasty, the Valois Tapestries ultimately showcase Catherine’s dynastic determination. For example, the Journey tapestry signifies Catherine’s devotion to her family’s legacy by depicting Henry III at the front of the procession. Present at this event would have been King Charles IX. Therefore, replacing Charles IX with Henry III shows how Catherine only depicted her living children in art.4 This is a testimony of her dedication to continuing the Valois dynasty and eliciting their power to the rest of Europe.

Unfortunately, after Catherine died on January 5, 1589, the Valois dynasty ended when Henry III was assassinated a few months later. All that remains of the 261-year Valois dynasty reign are the Valois Tapestries, thanks to Catherine de’ Medici’s unwavering determination. 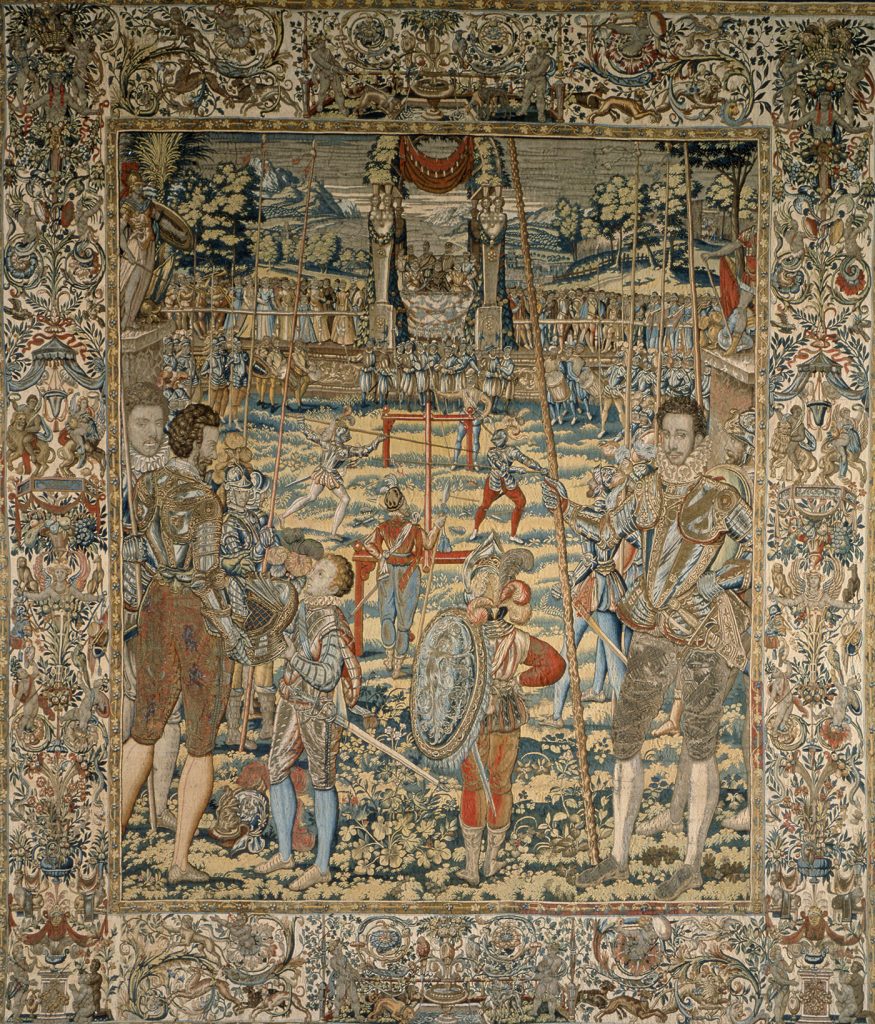 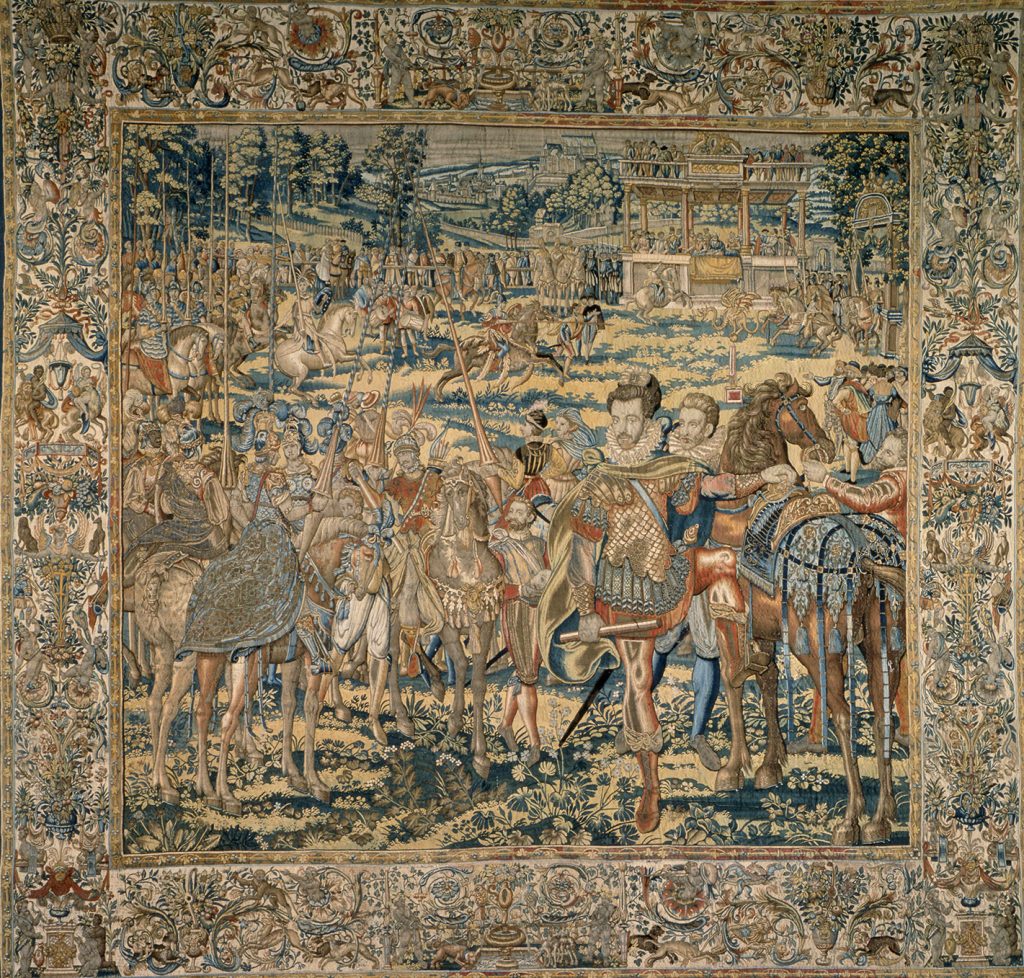 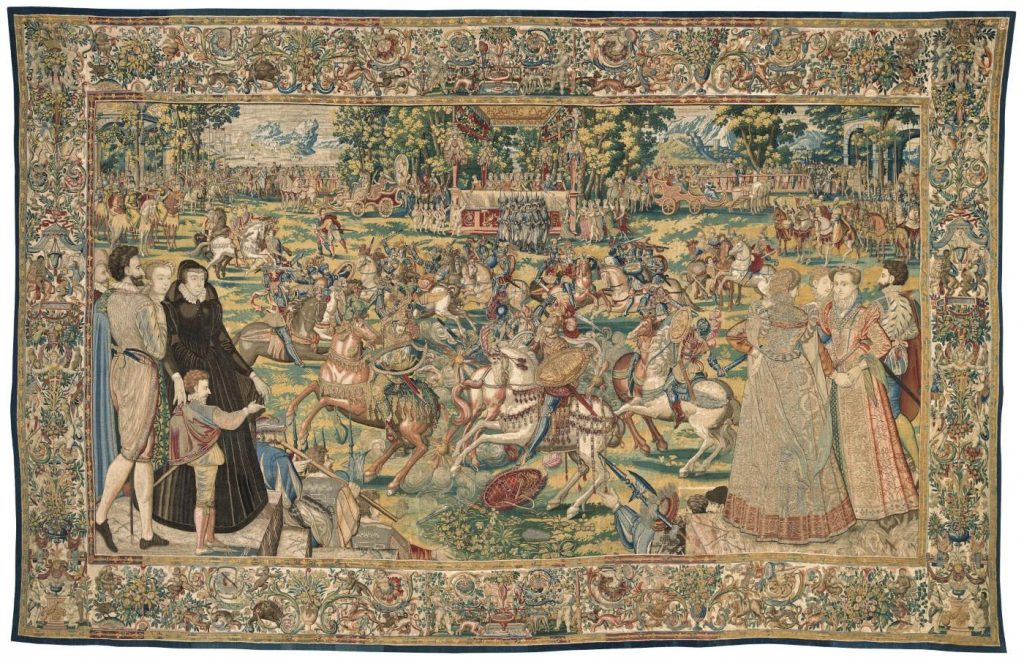 In Polish Ambassadors, Henry I, Duke of Guise, might be the figure depicted in the front of the scene, solely based on his distinctive features from portraits. It shows the festivities at Tuileries Palace in Paris in September of 1573, which welcomed Polish ambassadors as they had come to guide Henry I to become king of Poland.

In Barriers, Charles III, Duke of Lorraine, the widowed son-in-law to Catherine, is depicted with his back away from the view and his son Charles. In the tapestry background, a sporting contest takes place, which might have been held in Fontainebleau in 1564.

In Quintain, Henry III is the prominent figure as he mounts his horse. The tapestry is called Quintain because, in the background, knights joust at a post decorated with a gold dragon on top.

Margaret of Valois appears in Tournament with her husband, Henry IV. Louise de Lorraine-Vaudémont (Henri III’s wife) and Catherine de’ Medici, on the opposite side. It is presumed to be a tournament during Elisabeth of Valois’s visit to Bayonne in 1565.