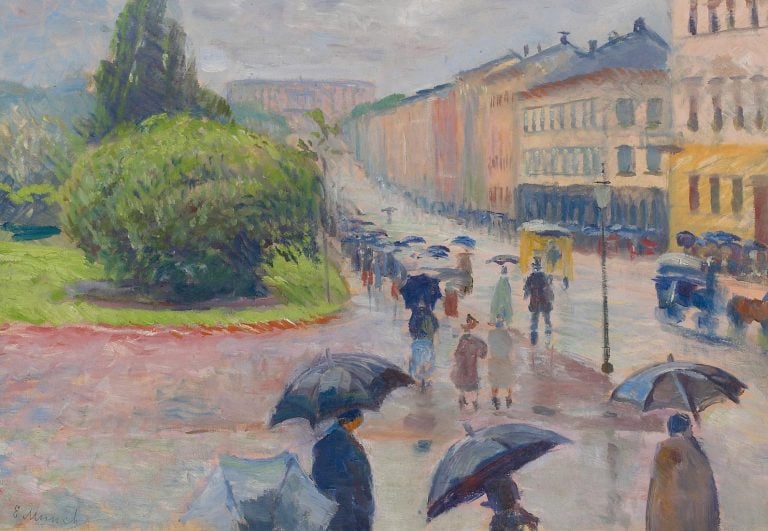 The causal relationship between weather and human emotion is evident on unbearably hot summer days that result in feelings of despair and melancholy. While rain may also evoke a sense of gloom, there are many pluviophiles among us for whom rainfall elicits a poetic response and a deep sense of solace. There is an undeniably mesmerizing beauty in the world that stands still waiting for the skies to clear. Here are 10 works that were inspired by precipitation.

1. Divine Lovers in the Rain

This vibrant Indian composition originated in the Rajput School of 18th-century Rajasthan. Depictions of the supreme Hindu God, Krishna featured with great frequency in the works of Rajasthani royal ateliers. Krishna remains identifiable by his blue skin and yellow robes. He is depicted with his eternal consort, Radha, and they are set apart from their entourage by their halos. The divine couple has their eyes interlocked in a private moment, indicating their intense and eternal love affair. Krishna and Radha along with their entourage are dressed in ornate clothing and jewelry.

The setting is a beautiful garden full of lush trees and plentiful flowering bushes – a true vision of spring. The cow and her calf in the foreground are symbolic of Krishna’s upbringing in Vrindavan, a rural community of cowherds. While the showers are not apparent here, the dark clouds and figures seeking shelter under a tarp hint at their presence.

This psychological rendition of rain is the work of 19th-century artist, Gustave Caillebotte. The artist belonged to a wealthy family and spent several summers at his family’s summer home at the bank of the river Yerres, located in the southeastern suburbs of Paris. Caillebotte featured Yerres in many of his artworks. The water has a mirror-like quality and the rain is apparent in the droplets disturbing the otherwise still waters.

This extraordinary oil painting was inspired and influenced by Japanese woodblock prints. This influence is apparent in the vertical format, the pattern of the raindrop, and the level of detail. The painting evokes a sense of nostalgia, perhaps an intentional consequence of Caillebotte’s memories of his childhood spent at the banks of the river Yerres with his siblings.

3. Train in the Rain

Immediately apparent in this painting is the thrilling impression of velocity as the oncoming train speeds through the rain. Evident in the lower left of the painting is a boat floating along the river, juxtaposing the significant speed of the locomotive. Turner’s expertise lies in the depiction of a train, i.e. one of the hallmarks of industrialization in a manner that still evokes the emotional response expected in a landscape painting. Although all the elements of the painting are hazy and disappear into the setting, they combine to form a compelling depiction.

Although the setting is widely believed to depict the Maidenhead Railway Bridge across the River Thames, the depiction is more so intended as an allegory of the symbiosis of nature and technology, perhaps a prediction of the near future. This painting by the 19th-century British painter J. M. W. Turner was first exhibited at the Royal Academy in 1844 and is now at the National Gallery in London, UK.

4. Commuters in the Rain

This illustration is the work of 20th-century American artist, John Philip Falter, known commonly as John Falter. He was best known for his significant contributions to the Indianapolis-based publication, The Saturday Evening Post during a 25-year-long relationship with the magazine that resulted in over 120 covers.

This composition was published as the cover illustration of the issue of The Saturday Evening Post on October 7th, 1961. Apparently, in this painting, there are 19 commuters that just disembarked from a train into a torrential downpour. The artist observes them as they scurry across, seeking shelter with umbrellas, scarves, and newspapers (remember those?). Their sense of urgency and perhaps their frustration is demonstrated in a way that is deeply familiar.

The duration of Vincent van Gogh‘s stay in a clinic outside Arles marked a highly productive phase in his career despite his frail health. His bedroom window overlooked a scenic wheat field at the foothills of the Alps that inspired several priceless masterpieces.

In this painting, there is a plunging perspective of the fields visible from his window, under the cover of a heavy rain shower. Van Gogh chose muted colors to emphasize the biting cold mist and heavy rains. The influence of Japanese woodblocks is evident here in Van Gogh’s depiction of rain with dark parallel lines across the canvas. There is also a set of diagonal strokes that create a screen of raindrops visible close to the window.

Utagawa Kunisada, known as Toyokuni III, was a celebrated ukiyo-e artist that participated in the captivating Japanese phenomenon of depicting rain in woodblock prints. In this composition, we can see the depiction of a scenic landscape with rolling hills and a pool of water. There are several figures that emerge upon a closer inspection of this artwork and they appear to be completely unaffected by the rain as they continue to engage in their various pursuits. The rain is portrayed in the typical ukiyo-e fashion of evenly spaced parallel strokes.

This painting was published by Yamaguchiya Tōbei, Kinkōdō in the Unlimited Series of Landscapes collection.

There are many atmospheric paintings by American Impressionist Childe Hassam that suggest his love for rain. Here, Hassam has rendered a view of the South End neighborhood, visible at the intersection of Columbus Avenue and Appleton Street, in his hometown of Boston. Hassam himself lived farther down on Columbus Avenue. The scene conveys a reflective observation of daily life in motion with horse-drawn carriages and period clothing under the cover of rain.

Interestingly, the central focal point of this painting is left blank. The view of the wide boulevard was inspired by Georges-Eugène Haussmann’s wide boulevards that Hassam had observed during a trip to Paris, France.

David Cox was a talented artist from Birmingham, UK, who moved to London to further his artistic training. By the late 19th century, Cox became a leading watercolorist with an immensely successful career creating scenic landscapes. The Royal Birmingham Society of Artists features a bust of Cox to honor his career and legacy. In this artwork, Cox utilized diagonal brushstrokes to depict an Impressionist rendering of both the landscape and the torrential downpour. A solitary bull has been illustrated looking up at the heavens, almost challenging the downpour. The depiction of the bull in a vast flat Welsh landscape conveys a powerful and almost aggressive image of nature and raw emotion.

9. Jockeys in the Rain

Edgar Degas‘ paintings and sculptures featuring dancers in motion are well-known and are scattered across museums all over the world. Academia has been divided as to the motivations behind such depictions and whether they were tainted with misogyny or a hallmark of his early feminist ideals. However, it is also likely that the choice of subject was reflective of his fascination with the movement of forms through space.

In this painting, however, Degas depicts five male jockeys engaged in play in the midst of a rain shower in a vast flat field. There appear to be several more figures in the distant background. The form of illustration of the rain is once more illustrative of the tremendous influence of Japanese woodblocks in 19th century Europe.

In The Umbrellas, Pierre-Auguste Renoir demonstrated a busy street scene in Paris, France. The figures in this painting are unevenly distributed, and the focal point is not at the center of the composition. Although several figures are apparent (even in the distance), a viewer is, perhaps, immediately drawn to the female figure to the left of the frame. This figure was modeled after Renoir’s lover, Suzanne Valadon. She is without an umbrella, and a keen male figure next to her seems to have taken notice. Next to her is a fashionably dressed mother observing her two daughters.

Renoir has expertly depicted great movement and a natural flow. The rain is only apparent in this painting in the use of the umbrellas and a hint of dark grey clouds peeking through from behind them.