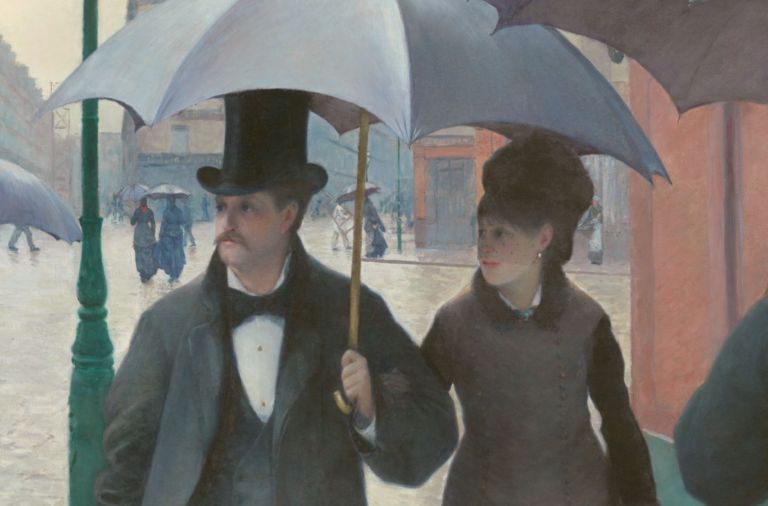 Paris Street; Rainy Day is probably the most known work of French artist Gustave Caillebotte (1848–1894). In this painting, we see a number of people strolling across the Place de Dublin, then known as the Carrefour de Moscou, at an intersection to the east of the Gare Saint Lazare in the north of Paris. All of these individuals are not interacting with each other: nobody’s talking to anybody, and everyone is a wandering atom, a nameless hero of the city universe.

According to art historians, the light indicates that the painting is set on a wintry afternoon. We see a couple with an umbrella, they seem to be well off. She wears a hat, veil, diamond earrings, a demure brown dress, and a very fashionable fur-lined coat. He wears a mustache, topcoat, frock coat, top hat, bow tie, starched white shirt, buttoned waistcoat, and an open long coat with the collar turned up. In the background, we see some other figures: a maid in a doorway, and a decorator carrying a ladder, cut off by an umbrella above him.

Caillebotte’s interest in photography is evident here. He reproduces the effect of a camera lens and the points at the center of the image seem to bulge. He also recreates the focusing effect of the camera in the way that it sharpens only certain subjects of an image. The foreground is in focus, while the background becomes more and more blurry. The painting’s highly crafted surface, rigorous perspective, and grand scale differed from what Impressionists were presenting at their exhibitions – it was much more pleasing for the Parisian audiences accustomed to the Academic aesthetic of the official Salon. But at the same time, the asymmetrical composition and unusually cropped forms give us the feeling of something new, more modern. For these reasons, the painting dominated the celebrated Impressionist exhibition of 1877, largely organized by the artist himself.

While creating this masterpiece, he was a 29-year-old independent wealthy artist who was also financing many of his friends’ works. His father, Martial Caillebotte (1799–1874), had inherited the family’s military textile business. This sizable allowance, along with the inheritance Gustave received after the death of his father and his mother, allowed him to paint without the pressure to sell his work.