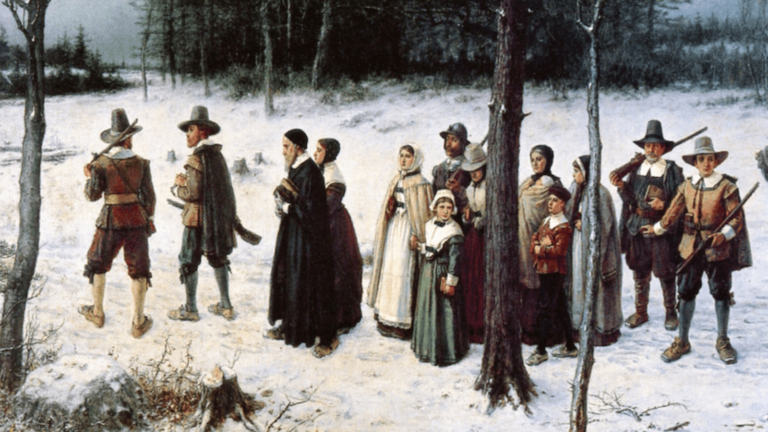 This week’s masterpiece is Pilgrims Going to Church by George Henry Boughton (1833-1905). Even though Boughton grew up in America, he was born in England and spent most of his career working in England. However, he became well known for painting scenes of early history of the American colonies. Pilgrims Going to Church is a great example of his style and subject matter.

I saw this painting during my trip to the New York Historical Society in New York City. I found it truly compelling, and I had a difficult time looking away. Pilgrims Going to Church is a large scene showing a small group of early American colonists, Puritans who had settled in New England, walking through a snowy landscape. They seem uneasy. Everybody is moving towards the left edge of the painting, but several members of the group look off to the side, as though worried about what might approach them from that direction. The two men bringing up the rear of the group seem particularly troubled. Both have turned away from the rest of the party, and the younger man reaches out a hand to stop his companion. And, of course, almost every man in the party carries a rifle. This new world is clearly a dangerous land. A young girl near the middle of the group also seems a bit distracted, and she was the character who caught my eye first. Only the preacher and the woman beside him seen unconcerned.

Boughton gives us no indication of what these pilgrims going to church have to fear. It could be wild animals, unfriendly natives, or something else. From the direction in which the last two men are looking, it seems uncomfortably possible that the we, the viewers, have intruded on this scene and are the pilgrims’ cause for concern. This unsettling feeling made me have a difficult time pulling my eyes away from the painting.

By the time Boughton made this painting in 1867, this stark and fearful world of the Puritans had long ago disappeared. However, Boughton came back to this setting over and over again in works like The Scarlet Letter (1867), Godspeed! Pilgrims Setting Out for Canterbury (1874), and The Landing of the Pilgrim Fathers (1869). It’s obvious that he was influenced by the Pre-Raphaelites and the Aesthetic Movement, which makes sense since he was acquainted with artists like Edwin Austin Abbey and James Whistler. I definitely see similarities with Abbey’s work, but Pilgrims Going to Church also reminds me somewhat of a more famous painting of a slightly-unsettling religious procession – Gustave Courbet’s 1849 Burial at Ornans. In addition to his religious and early American subjects, Boughton also frequently painted elegant portraits of Victorian-era ladies.

You can read a biography of Boughton and see more of his works here.