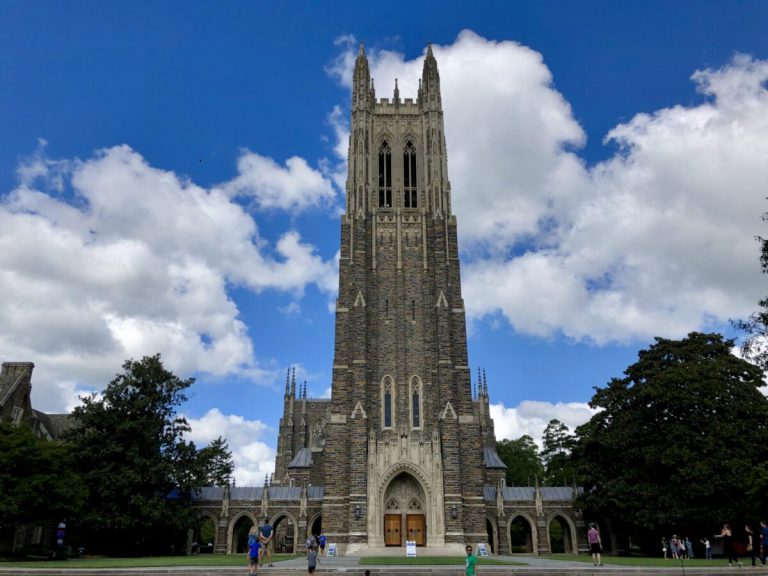 The Best of North Carolina Museum of Art: Staff Picks

The Duke University Chapel is a prime example of Collegiate Gothic architecture in the United States. It is also one of the most beautiful buildings in the American South. The term chapel is perhaps an understatement. That is to say, this is a large structure that comfortably seats about 1,800 people. It features spectacular architectural details such as ribbed vaults, grand cloisters, and pointed arches. Its tower rises 210 feet! This magnificent building can objectively be described as a cathedral in the style of the Canterbury Cathedral, England. However, although the Duke family were Methodists, Duke Chapel and the Duke University are officially non-denominational.

History of the Duke Chapel

The Duke Chapel was completed in 1935 at a cost of about $2.3 million. The founder of the University was James Buchanan Duke. It is believe that he chose the Gothic revival architectural style to echo the older established educational institutions such as Yale or Princeton. Both featured Gothic revival architecture. His attempt was ultimately successful attempt. Consequently, Duke University was able to establish itself as one of the foremost institutions of higher learning in the United States.

James Buchanan Duke stumbled upon the site of the university and the chapel in particular while walking through the dense forests of North Carolina. The Chapel stands at the heart of the university. The West Campus, including the Duke Chapel, was designed by Julian Abele, a well-known African-American architect of the time. He was chief designer in the offices of Horace Trumbauer in Philadelphia. Highly esteemed establishments from New York artistic and architectural elements received commissions for other artistic and architectural elements.

The design of the building is complex and breathtaking! For example, the chief material used in the construction of the West Campus is a volcanic rock known as the Hillsborough bluestone or Duke stone. The distinctive hue of this stone encompasses a majority of the structure and is the most recognizable feature of not only the Duke Chapel but also most of the West Campus. The variety of hues of the stone lends to the appearance of the structure rising naturally from the earth.

On the other hand, the limestone used in the lectern, balustrade, and vaults of the choir came from Indiana. Additionally, the 73-foot high nave ceiling is covered in Guastavino tile. The entrance to the Chapel has prominent images of important figures from Christianity and American history carved into it. Additionally the building has 77 stained-glass windows containing hundreds of figures that depict biblical events. The windows alone took close to three years to complete! The Chapel is also home to three pipe organs including one large pipe organ with 5,200 pipes. The iconic tower houses a 50-bell carillon!

The chapel has been in continuous and regular use since 1935 for worship services, concerts, weddings, and funerals.

The distinctive Duke rock came from a quarry near Hillsborough in North Carolina. This stone is notoriously hard to work with and many stone masons shy away from doing so. The rock has a distinctive and recognizable hue that presents a wide range of color from slate grey to a rust orange. The best stones were, of course, saved for the Chapel!

The quarry in Hillsborough is the only place where you can find this rock. Therefore, after decades of construction and maintenance work on the West Campus and the Chapel, significant areas of the quarry have been exhausted. Given the finite supply, regular ongoing maintenance is vital to conserving this famous building. For example, the Chapel closed for a year from May 2015 to May 2016 for restoration works.

Since its consecration 1935, the Duke Chapel has served not only as the spiritual center and symbol of Duke University and its students, but also as one of the most treasured landmarks in the beautiful state of North Carolina.