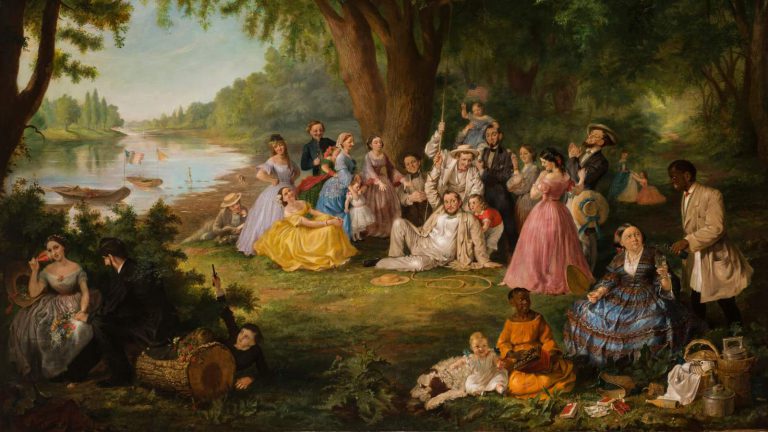 Lilly Martin Spencer, The Artist and Her Family at a Fourth of July Picnic, National Museum of Women in the Arts, Washington, DC, USA. Detail.

Along with her younger sister Sarah, Anna Claypoole Peale (1791-1878) was a member of the Peale dynasty of early American artists, headed by their uncle Charles Willson Peale. Despite the obvious skill on display in this lovely still life, Anna was best known as a painter of portrait miniatures. She achieved acclaim in this then-popular genre, portraying notable Americans such as Presidents James Monroe and Andrew Jackson.

Sarah Miriam Peale (1800-1885), like her older sister, found great success as a portrait painter. However, Sarah specialized in full-sized oil portraits rather than miniatures. This image of Susan Avery accompanied Peale’s pendant portrait of Susan’s husband Isaac, also in the NMWA collection. Although several women in the Peale family became noteworthy painters, Sarah and Anna alone received the honor of becoming the first female members of the Pennsylvania Academy of Fine Arts in 1824.

The English-born, Ohio-raised Lilly Martin Spencer (1822-1902) really could do it all. She created a large body of memorable still life and genre paintings while simultaneously raising her 13 children! Her art was the primary source of household income. Spencer’s large family takes center stage in this humorous painting, which appears frivolous on the surface but may actually contain Civil War-era social commentary. Light-hearted genre paintings like this enjoyed widespread popularity in Spencer’s time and sold very well as prints.

Harriet Goodhue Hosmer (1830-1908) represents a rare example of a 19th-century woman who became successful in Neoclassical sculpture. Much like Edmonia Lewis, another woman who fits into this category, Hosmer spent her career in Rome. While classical figures (mainly female) take up most of her oeuvre, this tender work in the NMWA collection portrays something quite different – the joined hands of Hosmer’s friends, famous American writers Elizabeth and Robert Barrett Browning.

American Impressionist Lilla Cabot Perry (1848-1933) travelled all over the world and found inspiration everywhere! In France, she studied at notable ateliers, befriended Claude Monet, and stayed at his home in Giverny. In Japan, she absorbed eastern aesthetics that then subsequently infused her artwork. Her steadfast dedication to Impressionism appears in this soft and sympathetic portrait, a highly characteristic work. She was also a poet.

Jennie Augusta Brownscombe (1850-1936) participated in the late-19th-century Colonial Revival movement by specializing in paintings of American history. This scene of Thanksgiving, one of two Brownscombe paintings in the NMWA collection, is particularly fitting, as Brownscombe’s mother’s family came over on the Mayflower. Obviously a savvy businesswoman, she often sold the reproduction rights to her paintings, thereby spreading her work to a broader audience. Brownscombe also remained active in teaching and artists’ associations throughout her career.

Ellen Day Hale (1855-1940) came from a prominent New England family that included two fellow painters – her sister Lilian and brother-in-law Philip. The second American Impressionist on our list, Hale is best known for her evocative portraits. June, her lone work in the NMWA collection, is a wonderful example of the light, sensitivity, and painterly brushwork that make her art so memorable. It also evokes the Dutch Old Masters that Hale appreciated during her time in Europe.

Eulabee Dix (1878-1961) had something in common with more than one other woman on this list. She helped to revive Anna Claypoole Peale’s preferred genre of miniature painting, while participating in the Colonial Revival movement like Jennie Augusta Brownscombe. Her soft and stunning little watercolor on ivory portraits have been compared to stained glass, and Dix herself called them “jewel portraits”. This NMWA portrait depicts American movie starlet Ethel Barrymore in an elegant hat.

Self-taught artist Clementine Hunter (1887-1988) painted earnest and cheerful scenes that can quickly bring a smile to any face. An African-American plantation worker in Louisiana, Hunter didn’t even start painting until she was in her sixties, but she obviously made up for lost time. Her works depict events and settings from her daily life. She would memorize them during the day and then commemorate them in her unique style in the evening, after a full day of farming.

Grace Arnold Albee (1890-1985) was a Rhode Island-born printmaker. She studied in France for five years, but spent most of her career in the American northeast. She worked primarily in wood engraving, a medium undergoing a revival at this time. In contrast to this bold, silhouette-like botanical print, detailed rural and urban landscapes make up most of her oeuvre. The NMWA owns lovely examples of both styles.

Dinner is served for some of the most famous and important women in history. Goddesses, saints, artists, poets, writers, queens, wives, mothers, and...