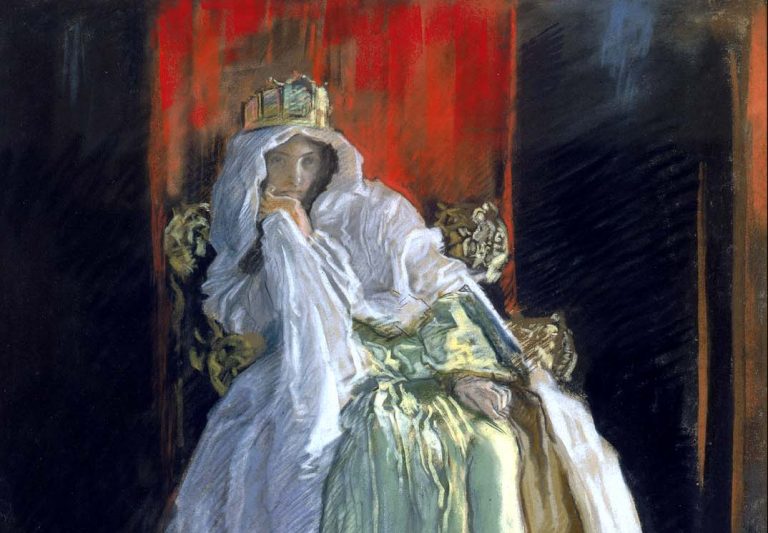 A painter and illustrator Edwin Austin Abbey was born in the US, but he loved all things British, particularly the works of William Shakespeare. He illustrated many plays of the great English writer. Abbey’s Shakespeare paintings are gorgeous and dramatic.

Edwin Austin Abbey (1852-1911) was born in the US, but he spent most of his career in England. He was very inspired by the works of William Shakespeare. Abbey first visited England in 1878 to do research for an illustration project. He fell in love with the place and moved there permanently in 1883. He had a successful career illustrating dozens of books, including many of Shakespeare’s plays. However, he eventually switched to oil painting, possibly due to his friendship with John Singer Sargent and other British and American painters.

His painting style is clearly related to the Pre-Raphaelites, who numbered among his friends. He shared their use of rich colors, love of detail, and medieval settings. Many people have observed that his style has a lot in common with theatre productions. This is very appropriate for a painter best known for depicting Shakespeare’s tragedies.

Fittingly, Abbey’s Shakespeare paintings often seem like they take place on a stage set. The faces of key figures and their gestures aimed towards the front, look as though their movements have been choreographed with an audience in mind. Their elaborate period costumes, often in eye-catching shades of red, definitely set the stage, too. Medieval and Renaissance dress features heavily in many of Abbey’s works.

He definitely had a taste for drama, at least in his paintings if not in his life. Abbey’s Shakespeare paintings usually depict dramatic moments from The Bard’s most intense tragedies. His artwork Richard, Duke of Gloucester, and the Lady Anne (above) depicts a tense moment from Shakespeare’s Richard III.

The work shows the title character, attempting to seduce Lady Anne, the widow of the man he’s just murdered. The action takes place in the middle of a procession of mourners at her husband’s funeral. Richard’s red cloak and central position immediately draw the eye. He’s an obviously villainous figure. The elaborately-dressed Lady Anne seems keen to get away from him but at the same time is trapped by the procession of mourners behind her. These figures, with their black hoods and red-handled spears take on an unfriendly and even threatening tone. Two young boys appear near the back of the painting. They look a lot like the figures in several paintings of the two young princes Richard III is believed to have had killed in order to hold onto his throne.

This painting creates so much intrigue in just one scene that viewers want to know what happens next. As you can see from his King Lear painting (top of this page), this is a hallmark of Abbey’s Shakespeare paintings. It’s probably due to his strong illustration background.

As a true Anglophile, Abbey also painted contemporary British history, like King Edward II’s 1902 coronation. This work now hangs in the Buckingham Palace. He also received two important commissions back in America. He painted a series of murals, The Quest for the Holy Grail, for the Boston Public Library. He also received a commission to paint murals showing Pennsylvania history for the Pennsylvania State Capital building. Abbey was originally from Philadelphia. Unfortunately, he didn’t live to complete all the murals.

After Abbey’s death, his wife Mary Gertrude Abbey worked hard to preserve his legacy. First, she arranged for his partially-finished Capital murals to be completed by other artists, including John Singer Sargent. (Violet Oakley, another Pennsylvania-born painter/illustrator with many similarities to Abbey, was hired to complete the rest of the project following the success of her own Capital murals.)

Then, Mary Gertrude Abbey organized and donated his entire collection of papers, sketches, etc. to the Yale University Art Gallery. Thanks to her efforts, you can now see all of it at Yale and most of it online. There are hundreds of illustrations showing different scenes from Shakespearean tragedies.

“Who Is Sylvia? What Is She, That All the Swains Commend Her?“, National Gallery of Art. Accessed 3 Jan 2022.